Costs of daily aspirin may outweigh its benefits, study finds

A landmark US-Australian study has found taking aspirin daily does not improve the lifespan of people over 70, with researchers warning the costs may outweigh the benefits for healthy elderly people taking the medication to stave off various conditions.

The research, published in the New England Journal of Medicine on Monday, found the use of aspirin by healthy people over 70 had no measurable impact on a person's likelihood to suffer from heart disease, dementia, stroke, cancer, or physical disability. 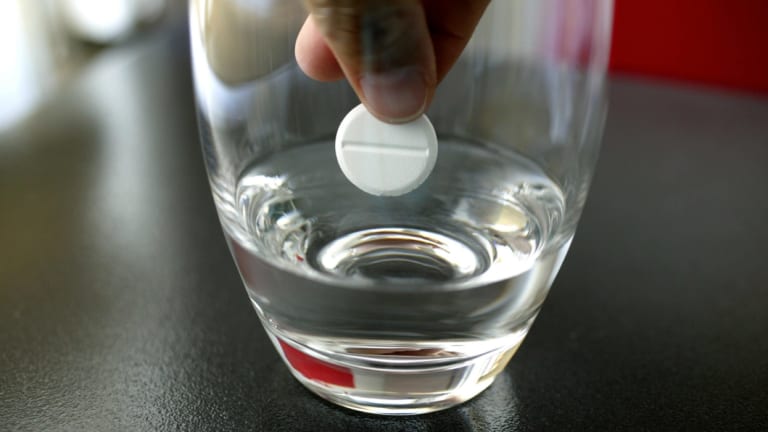 A landmark study has shown a daily aspirin does not improve the lifespan of those over 70.

The study focused on the use of aspirin as a preventative medication for by elderly people who have not previously suffered a heart attack or a stroke. Its findings do not disprove the benefits of aspirin for those who have cardiovascular disease (the Heart Foundation recommends a daily dose for those with coronary heart disease), have previously suffered from a heart attack or a stroke, or those younger than 70.

Professor John McNeil, head of Monash University's Department of Epidemiology and Preventative Medicine, said the research sought to answer a question which has been "unresolved for a number of years".

While US Preventive Services Task Force guidelines on aspirin use, among other international guidelines, recommend a daily dose to prevent cardiovascular disease between the age of 50 and 69, a lack of available research meant this recommendation was not extended to people older than 70.

The new research, known as the ASPREE trial (ASPirin in Reducing Events in the Elderly), is the largest clinical trial ever to be conducted in Australia.

Over 19,000 participants took part in the study, which was jointly conducted by Monash University and the US Berman Centre for Outcomes and Clinical Research.

Participants, including over 16,000 Australians, took either aspirin or a placebo daily over a four-and-a-half year period.

Not only was there little difference between the two groups in terms of disease prevention, but, as the medication is a blood thinner, trial participants taking daily aspirin were more likely to suffer from serious bleeding (3.8 per cent of the group), than the placebo group (2.8 per cent).

"[The elderly population] is where the taking of aspirin is most likely to have its risks," Professor McNeil explained. "Particularly bleeding, which is more common in older people."

Aspirin is not recommended for people who are pregnant or breastfeeding, have an active or previous stomach ulcer, or have a medical condition associated with bleeding.

First developed in 1897, aspirin is a non-steroidal anti-inflammatory. It is used for a variety of ailments ranging from one-off pain relief from a headache to the prevention of blood clots in those at risk of heart attack and stroke.

Although a large Harvard study published in 2016 found daily aspirin for six years could reduce a person's risk of bowel cancer by 19 per cent, current Australian guidelines do not recommend aspirin for those at average risk, instead emphasising diet and lifestyle factors.

According to Professor McNeil, these results should make those who are taking aspirin preventatively of their own accord think twice, noting that "many people take [aspirin] without medical advice".

"If [a person has] been prescribed aspirin by their doctor they should assume there's a good reason. But for the people who decide to take aspirin just off their own bat, this research has cast some doubt over whether it is a good idea."

Any long-term user of aspirin who is considering stopping the medication should first consult with their doctor.

Leonardo wants to see Allegri at PSG, but the club still trusts Tuchel
Manchester United and Liverpool want to sign 15-year-old Sochaux defender of Kambala
Lloris and Son almost got into a fight after the 1st half with Everton. Before the 2nd, the players made up
Massimiliano Allegri: I am Looking for a project that will have ambitions to win
Simone Inzaghi on the scudetto fight: Lazio looks only at itself
Ntombela and Mourinho do not communicate for two weeks. Then the player told the coach that he wanted to leave Tottenham
The ex-Real Madrid player helps develop artificial intelligence in football. This feature is useful for a coach, sports Director, and doctor at the same time
Source https://www.canberratimes.com.au/lifestyle/health-and-wellness/costs-of-daily-aspirin-may-outweigh-its-benefits-study-finds-20180913-p503l3.html?ref=rss&utm_medium=rss&utm_source=rss_feed