Deputy lord mayor Arron Wood has called on Melbourne city councillors to ask the state government to dump its preferred site for a second safe-injecting room.

The Andrews government announced its intention to trial the second injecting room last month and named community health centre cohealth, near the Queen Victoria Market, as its preferred location.

Cr Wood will next week ask Melbourne City Council to write to Mental Health Minister Martin Foley and former police boss Ken Lay, who is leading consultations, urging that the site be dropped from the government's plans because it is "inappropriate and inadequate".

While the deputy lord mayor was overruled on a similar motion last month, lord mayor Sally Capp, who had voted against him, has now seconded his motion listed for next Tuesday. 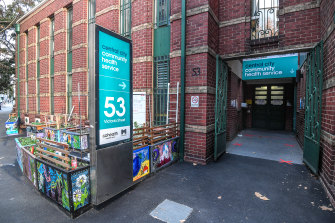 Cr Capp and Cr Wood had both said they were not consulted on the idea.

After his failed motion last month, the deputy lord mayor said the council had since met concerned residents.

"Given the particular vulnerability of many residents of Drill Hall [near cohealth], many of whom were all too familiar with addiction issues, their distress and alarm at the prospect of the preferred site being on their doorstep was made very clear," the motion said.

Cr Wood said some councillors had also since learnt that the City of Melbourne has a 299-year lease over the site and believes this effectively means the safe-injecting room can't properly proceed there without council approval.

A cohealth spokesman disputed claims the facility is inadequate, saying it "already provides a range of health and wellbeing services" and could easily incorporate a safe-injecting service.

"People with addictions need access to health, wellbeing and recovery services. It is our mission to provide them and all those in need with the critical support they need – contributing to a safer local community," the spokesman said.

Mr Foley said the government remained open to any alternative site that meets its criteria.

"As we've previously said, if in our work consulting with the local council, they locate a different site that also meets the criteria set ... then we’ll remain open to that," he said in a statement.

The government announced the second trial on the recommendation of an independent review panel, which found that 51 people died of overdoses in the City of Melbourne between January 2015 and September 2019.

Therry Street tenant David Horsfall, who sells The Big Issue and is vision impaired, fears vulnerable residents could be worse off if more drug users come to the apartments or community gardens in the area.

"I am particularly concerned that the creation of a local drug market for traffickers will encourage them to set up their activities in this building and even within the apartments of vulnerable residents," he said.

Cr Wood also noted that Queen Victoria Market management has surveyed all of its 600 traders, with 92 per cent registering their opposition to the plans. Market customers are still being surveyed, market CEO Stan Liacos said.

Philippe Coutinho: it was unusual to Play against Barca, but I have a contract with Bayern
Bartomeu does not intend to retire after 2:8 from Bayern
Bayern punished Barcelona for an 8-man defense. In this match, Messi was the problem, not the solution
L'equipe put Setien one for 2:8 with Bayern. For the first time, such an assessment was received by a coach
Pozornik! Barca fans met the team at the hotel after 2:8 from Bayern
Bayer's CEO confirmed that Havertz wants to leave the club
Destruction of Barcelona - in gifs from Tiktok Davis. This is better than highlights!
Source https://www.theage.com.au/national/victoria/council-to-consider-bid-to-veto-second-injecting-room-site-20200716-p55cpo.html?ref=rss&utm_medium=rss&utm_source=rss_feed