Monterrey, Mexico: Ministers from a trans-Pacific trade bloc have agreed to fight protectionism and avoid food and medicine shortages during the coronavirus pandemic.

"We strongly believe that given the current circumstances, it is more important than ever to counter protectionism," they said statement, released after a virtual ministerial meeting of the 11 members hosted by Mexico. 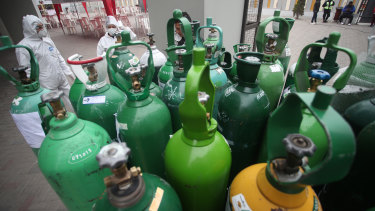 The pandemic has boosted demand for oxygen as well as other medical supplies.Credit:Getty Images

The members pledged to "facilitate the flow of essential goods and services during the pandemic, including medical supplies and equipment".

The pandemic has exacerbated a trend towards protectionism on the global stage, with a number of European countries taking steps to favour domestic investments, and ongoing saber-rattling between the United States and China.

Lockdowns around the world temporarily shattered the web of suppliers central to modern manufacturing.

"I am convinced we must take action to strengthen existing regional supply chains and to develop new ones" in the face of the coronavirus pandemic, Mexican Economic Minister Graciela Marquez said in her speech opening the meeting.

The group has a combined economy of $US13.5 trillion ($18.9 trillion). It also expressed support for modernising the World Trade Organisation (WTO), and said it supported growing the bloc through the accession of new members.

The statement said the WTO should demonstrate an ability to deliver "outcomes on 21st century issues," in an apparent dig at the global trade organisation's more than decade-long deadlock in trade negotiations.

The world's two largest economies are not members of the CPTPP bloc, which was established in part as a counterweight to China's growing clout. US President Donald Trump withdrew the United States from the agreement soon after he took office in 2017.

Other countries want in, including the United Kingdom, which is keen to strike new trading partnerships after its exit from the European Union.

Britain's ambassador to Mexico, Corin Robertson, said the process of accession would take time and no major announcements were expected about the matter during the ministerial meeting.

"It's still very much our intent to join CPTPP. We see it as a great opportunity for the UK as part of a more ambitious trade agenda post-Brexit," Robertson said.

Andy Cole on £ 109m for Sancho: it's crazy money. Manchester United will not spend them at random
Juventus loaned Luca Pellegrini to Genoa
Palace, Brighton and Sheffield want to buy Brewster. Liverpool ask for 25 million pounds
Milan have offered 4 million euros for the striker Bodo-Glimt Gauge. He scored them in the Europa League
Atletico showed a photo of Suarez in three sets of uniforms
Lemar is Interesting to Leipzig
Chelsea midfielder Loftus-cheek is wanted by West ham, Southampton and Aston Villa
Source https://www.smh.com.au/world/oceania/countries-in-pacific-unite-to-guarantee-food-medicine-in-pandemic-20200806-p55ja5.html?ref=rss&utm_medium=rss&utm_source=rss_feed