Repair work is under way after a burst water main led to the closure of a street and delays in Brisbane's CBD on Tuesday morning.

Queensland Urban Utilities were alerted to the incident on Makerston Street, near the intersection with Roma Street, about 4.30am on Tuesday. 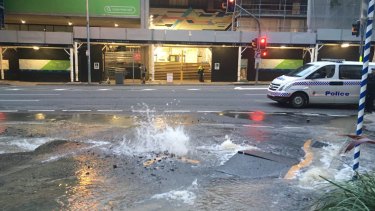 Makerston Street in the CBD has been closed due to a burst water main, with delays in the area expected.Credit:Queensland Police Service

The pipe had been repaired by 10am, with work then turning to the cracked road surface. Images from the scene showed water gushing from a number of holes and pooling along the gutter.

"The repair is complex due to underground services in the area, so work is expected to continue throughout the day," QUU spokeswoman Michelle Cull said.

"Traffic control is in place and both lanes of Makerston Street are closed near Roma Street, so motorists are advised to please seek alternative routes."

A small section of bus lane along Roma Street is also closed at the intersection, though there has been no impact to services using the route.

A Queensland police spokesman said delays were expected in the area.

The most important news, in your inbox, at the start and end of each day. Sign up for the Brisbane Times' newsletter here.

Hans-Dieter flick: I Hope Alaba will sign a contract with Bayern. Our club is one of the best in the world
Diego Maradona: Messi gave Barca everything, brought them to the top. He was not treated the way he deserved
Federico Chiesa: I hope to leave my mark in Juve. We will achieve great results
The Coach Of Benfica: I don't want us to look like the current Barcelona, it has nothing
Guardiola on returning to Barca: I'm happy at Manchester City. I hope to stay here
Fabinho will not play with West ham due to injury
Ronald Koeman: Maradona was the best in his time. Now the best Messi
Source https://www.smh.com.au/national/queensland/burst-water-main-causing-cbd-delays-20200929-p5604z.html?ref=rss&utm_medium=rss&utm_source=rss_feed

Giants to force Cats into a trade for Cameron