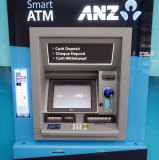 The would-be thieves targeted an ANZ ATM located on the outside wall of the shopping centre.Credit:Damian White

The attempt failed after only one of the bombs exploded and a second partially detonated before the suspects ran away, according to police. The ATM was only slightly damaged and no cash was stolen.

But the incident, rare in the country, left many people feeling rattled.

She said police were making it a priority to find the people responsible and hold them to account.

McBeth said security footage indicated the suspects walked up to the ATM at the Chartwell Shopping Centre in Hamilton just after 2.30am with two packages containing the bombs and tried to detonate them simultaneously.

She said each of the bombs was about 30 centimetres long and they weren't particularly sophisticated or powerful.

Authorities temporarily closed the centre and some nearby streets while they searched the area. A military bomb disposal team was called and disposed of the five unexploded bombs.

The ATM stands at an exterior wall of the shopping centre at an ANZ bank branch.

Yolanda Julius, who lives across from the shopping centre, told news agency RNZ that a loud bang woke up her and her husband and she saw two people wearing black clothing running across the carpark. She said their faces were covered.

Lyon values Aouar over 40 million euros. Arsenal offered 35
Tottenham are not selling Mourinho's merch - because Chelsea still own the trademark rights. But it didn't stop Manchester United
Shomurodov is close to moving from Rostov to Genoa for 8 million euros (Sport Italia)
Pobegalov about 12 cases of covid in Shinnik: I hope we can start training by October 4
Kulchiy is likely to become an acting coach of Dynamo. They want to keep Novikov in the club's system
Due to covid, the Premier League season may be considered prematurely completed if the 2/3 and 3/4 rounds are completed
Bayern could give Nübel a loan deal if Ulreich stays at the club
Source https://www.smh.com.au/world/oceania/criminals-try-to-blast-open-hamilton-atm-with-pipe-bombs-20200806-p55j9z.html?ref=rss&utm_medium=rss&utm_source=rss_feed