Bill Belichick, the six times Super Bowl-winning coach of the NFL’s New England Patriots, once said of leadership: "It's like pornography – even if you can't define it, you know it when you see it."

"Culture" is relentlessly mentioned in the media, while rarely described in words. Yet, if you walk into a Melbourne Storm dressing room, watch their training sessions or attend a pre-season camp, you witness close up, across the group, this intangible mix of trust and the subjugation of ego.

Vision of Storm coach Craig Bellamy being ridiculed by his players as he attempted to change a tyre on his car, or the Panthers playing basketball in the corridor of a hotel hours before kick-off offer a glimpse of a relaxed, united team.

Club culture takes time to evolve, but can be quickly lost. All the youthful joy and companionship we see in today’s Panthers was probably evident last year, until the sex tapes scandal derailed their season.

The best expression of culture I witnessed at the Storm came this January at Geelong during a debrief of their 2019 campaign, which ended with defeat in the grand final qualifier to eventual premiers the Roosters. The coaches were struggling to find consensus on a unifying theme for the season until captain Cameron Smith addressed the group.

"Everything I do during the week is aimed at playing the best I can for you blokes at the weekend," he said.

You can’t fake that in front of 40 people. Smith and Bellamy are the springboards for the sacrifice and trust that makes the Storm want to play for each other.

To outsiders, Smith can exude a mostly unembraceable presence and, even to insiders, he lives in a bubble, long before COVID-19 popularised the term. But it’s cruel for his critics to call him selfish. 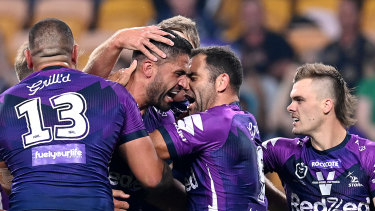 Cameron Smith sets the standards that drive the Storm.Credit:Getty Images

Bellamy discovered the secret of the sorcerer’s stone of coaching two decades ago: work hard, act honestly and the players will all want to play for you.

The Storm’s original motto, as written by the club's founding fathers in 1998, is "the relentless pursuit of excellence".

Excellence is a noble pursuit for most of us. Its saving grace is that it is merely an ideal, an unattainable abstraction. But when you have the work ethic of Bellamy, perfection isn't all that far-fetched.

A recent example of Storm culture came when the coaches and management team gathered to choose a captain for a team of mainly back-up players to meet the Dragons in the final round. The obvious choice was the experienced Christian Welch, but he had been fined by the NRL for breaching a lockdown rule at the team’s resort, only hours before it was relaxed. Brandon Smith was also a popular candidate, but he can still be a minute late for training, or bring the wrong boots.

Sometimes, redemption is rewarded. Winger Sandor Earl spent four years on the sidelines serving a ban for taking performance-enhancing drugs, then another following an ACL injury after joining the Storm. But his position on the flank had him too far from the play, so the talkative fullback Ryan Papenhuyzen was chosen. 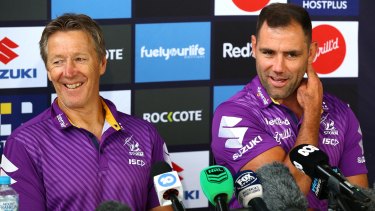 Craig Bellamy and Captain Cameron share a laugh as they front the media during the week.Credit:Getty

Following the Geelong camp, I asked Bellamy which of the new players impressed him the most. He answered centre Brenko Lee, who the Titans had released and described as "not a first-grader". A columnist this week described Lee as the "Storm’s weak link". Perhaps this was prompted by a blind flick pass Lee made against Parramatta. It went to ground but if winger Suliasi Vunivalu had been in position, a try was likely. Lee trusted Vunivalu to be there and it’s the winger who should be criticised.

It’s the Storm’s other side – the left – which is the more lethal, with the underrated Kenny Bromwich, the mercurial, stepping Cameron Munster, the brutally strong Justin Olam and the ultra-quick Josh Addo-Carr.

Yet the Storm’s right side will have a major defensive challenge against Penrith’s go-to left side on Sunday night, particularly with the monstrous Viliame Kikau standing beside the elusive Jarome Luai. Panther’s half Nathan Cleary floats either side of the ruck, but when he links with Luai, particularly on a short kick-chase in-goal, alarm bells should be ringing. The Storm will attempt to cut down Cleary’s thinking and kicking time, particularly the gently arced bombs he launches for a flying Kikau. 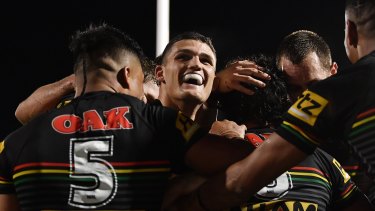 The Storm will be on high alert when Nathan Cleary gets the ball in the grand final.Credit:NRL Photos

Still, the Storm have an advantage in attacking kicks to the corners with their wingers being taller than their opposites, leaping for bombs launched by the Storm’s increasingly confident and multi-skilled halfback, Jahrome Hughes.

The battle of the hookers will be absorbing with Cameron Smith against Api Koroisau, both of whom can hypnotise the ruck defence. Smith has been particularly deceptive in shaping to pass wide to a well-spaced back line, but throwing a short, flat ball to human wrecking balls, such as Nelson Asofa-Solomona, Jesse Bromwich or Tino Faasuamaleaui.

However, the way Isaah Yeo cut through the ruck against the Rabbitohs is but one example of the strength of the Panthers pack.

Hopefully, the 2020 premiership won’t be decided by a disproportionate number of six-again calls under referee Gerard Sutton who, at the end of the regular season, was No.2 among his peers in the number of ruck infringements called, averaging 8.4 a game.

Provided the Storm hold the ball, their speed and combinations should prevail in the expected wet conditions, winning by 10 points with Papenhuyzen being awarded the Clive Churchill Medal.

Maradona was buried near Buenos Aires next to his parents
Mourinho on Maradona: We can find his football on Google, but we won't find Diego there. I miss him
Fabio Capello: against such a mediocre Real Madrid, Inter could have played better
Ibrahimovic met with the Swedish national team coach in Milan
Тот Tottenham midfielder Winks scored from 49 yards. This is the 3rd result in the Europa League, all - in this draw
This miss will hurt all men: Molde player missed from half a meter and drove into the bar
Mikel Arteta: I am Very happy with Pepe's game against Molde. Arsenal played well overall
Source https://www.theage.com.au/sport/nrl/culture-club-how-smith-bellamy-sacrifice-and-trust-set-the-storm-apart-20201023-p56853.html?ref=rss&utm_medium=rss&utm_source=rss_feed

'Always had your back': Glenn Maxwell's parting gift to manager to the stars

'Hand of God': How Maradona's famous words filled back pages around the globe

'The best circus to ever hit this country': Maradona's two weeks in Sydney

Eastwood Rugby to set up new home in Castle Hill

'Decisions that will last for years': 100 experts to review all major future NSW developments

'He had everything to live for': Young tradie killed in stabbing outside Seaford train station

Elimination day: How Victoria got to 28 days with no new virus cases

War Memorial must explore darker side of Australia at war

Not sci-fi: The Perth-based biotech company healing bones, one printout at a time