Curtis Scott's lawyer has blamed his client's poor form on the field on his legal dramas, arguing the police's reluctance to drop serious charges was weighing on his mind.

Scott's legal case was back in Downing Centre Local Court on Monday, where a two-day hearing was listed for September 9 and 10.

Lawyer Sam Macedone expressed frustration after the dates were handed down and said the police's unwillingness to settle the matter was taking a toll.

"It is weighing on his mind, absolutely, and I think it is affecting his performances," he said. "You'll see that he hasn't really got a start the last two games and it's because his form has dropped off.

"He's gone from a top centre to someone who looks like he's got the world of worries on his shoulders."

Raiders coach Ricky Stuart dropped Scott from the starting side before round eight, after a number of poor defensive efforts. 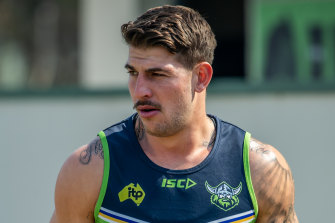 Raiders coach Ricky Stuart dropped Scott from his starting side before round eight.Credit:Karleen Minney

"It's unfortunate for Curtis at the moment but he's just out of a little form," Stuart said at the time. "He's had a lot of pressure put on him, a lot of pressure and criticism publicly, and I just wanted to take a little bit of the heat off him."

Scott's legal team had reached an agreement with police to plead guilty to two of the non-serious charges in exchange for the other five to be dropped. The deal came unstuck this month when police were asked to pay his legal fees.

Macedone told the court footage from three body-worn police cameras will be shown. In total, the footage is a couple of hours long.

"That must have been a long conversation," the chief magistrate said.

"Well it was the whole incident," Macedone said.

"Sometimes a picture is worth a thousand words," Henson replied.

"Well I am hoping so," the defence lawyer said.

Scott had been set to enter a plea of not guilty to all seven charges but is now expected to plead guilty to two of the minor charges.

Macedone said he has had multiple conversations with Scott, who also believes his form has been affected by his legal woes.

"He is just busy trying to get his form back," he said. "He's wanting this thing to go away and to get finished one way or the other - however, he doesn't want to end up paying a bloody fortune for something he says he is really not guilty of."

Scott is set to add Murugan Thangaraj, SC, to his legal team.

Thangaraj previously defended Wests Tigers player Russell Packer, who was handed a two-year jail sentence in 2014 for assault. He also represented former Eels star Semi Radradra when he was charged with domestic violence. The charges were dropped in 2017.

Ferran Torres: I Don't think Real Madrid will pass Manchester City in the Champions League
Manchester City will receive 15 million pounds after the transfer of Sancho to Manchester United
Buffon-Casillas: without you, everything would be less important
Ake arrived in Manchester to undergo a medical for city. He will be bought for 39 million pounds
Sancho's salary at Manchester United is 17.6 million euros a year. In Borussia, he receives 6 million rubles. Borussia Dortmund Midfielder Jaydon Sancho has agreed with Manchester United&nbsp;about the size of a paycheck
Hasenhuttl is the best coach in the Premier League in July. He is the first Austrian to receive this award
Real can sell Hames to Atletico for 10-15 million euros (El Golazo de Gol)
Source https://www.theage.com.au/sport/nrl/curtis-scott-s-poor-form-due-to-police-reluctance-to-drop-serious-charges-says-lawyer-20200713-p55bm0.html?ref=rss&utm_medium=rss&utm_source=rss_feed