Plans to install kilometres of separated bike lanes through Brisbane's CBD have been welcomed by cycling and active transport advocates.

On Tuesday, Brisbane City Council announced the plan to install the fully separated lanes along Elizabeth, Edward and Albert streets, with future links down North Quay and across William Street to Grey Street in South Brisbane, on Tueasday. 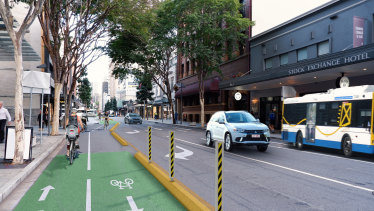 Several bus stops will be consolidated or moved to make way for the lanes, which the council's public and active transport committee chairman Ryan Murphy said was the start of a shift in thinking about Brisbane's street landscapes.

"Fundamentally, we have had to ask ourselves the question, what is the best use of scarce road space in the CBD?" Cr Murphy said.

"Is it to allow a handful of private vehicles to sit there for hours, or for thousands of cyclists and e-scooters to commute safely?"

Opposition leader Jared Cassidy said the bike lanes should have been installed during the coronavirus lockdown, when Brisbane's streets were quiet.

"Melbourne has been installing 500 metres of bike lane per week during their lockdown and Sydney has built six major cycle lanes over the past three months, but here in Brisbane the LNP administration has failed to install a single traffic cone," he said.

"It’s good to see plans finally on the table, but [Cr Murphy] really missed the lockdown boat other Australian cities took advantage of."

Labor went to the council election earlier this year with a pledge to build separated bike lanes through the CBD.

In May, council data showed Brisbane's bikeways recorded a 90 per cent spike in patronage on weekends since the pandemic, at a time when use of public transport plummeted.

The council's bikeway counters also recorded a 47 per cent increase on commuter routes.

"The trial will also enable council to monitor traffic flow, bus impacts, local business requirements and the use of the cycleway, to determine positive and negative impacts and any further changes that may be needed."

Dr Michael said RACQ had tracked 23 serious cycling accidents in the Brisbane CBD between 2014 and 2018, and the proposed bike lanes could encourage a permanent shift in commuter habits.

Bicycle Queensland, the state's peak group for cyclists, welcomed the announcement as a good start to a long-term challenge.

Cycling user groups also celebrated the announcement, many keen to see the construction begin as soon as possible.

"This will enable many more people to ride, and will make a huge difference to mobility in the CBD," Space For Cycling Brisbane posted on social media.

The 12-month trial will operate at a cost of $2.2 million, with Cr Murphy noting the street infrastructure could be returned to normal if the trial was not successful.

Pirlo on Ronaldo's optimal position: Start from the left inside and move to the center. He can play alongside Morata or Dybala
Mikhail Butovsky is probably the best doctor in our sport. A serious conversation about rudeness to doctors, salaries and leaving CSKA and Spartak
Naumov about the defeats of Zenit, Loko and Krasnodar in the RPL after the Champions League: Lack of professionalism in the players and the ability of the coaches
Ronaldo violated the coronavirus Protocol. An investigation is underway. Italian sports Minister on the departure of the player from Turin
Sports Director of Khimki about 2:0 with Rostov: We proved that we are a team and can win on the road
Jaka defeated Arsenal and Leicester did not create anything except the goal. We will try to take points from Manchester United
Pirlo about 1:1 with Verona: Juve do not need a slap in the face to Wake up and play intensely
Source https://www.smh.com.au/national/queensland/cycling-groups-welcome-12-month-bike-lane-trial-in-brisbane-cbd-20200929-p5609i.html?ref=rss&utm_medium=rss&utm_source=rss_feed