Jason Demetriou, the future face of South Sydney, is expected to be given full control at Redfern as Wayne Bennett spends the next fortnight in isolation following his breach of NRL biosecurity protocols.

Demetriou has been a long-time assistant to Bennett, following him to Souths from the Broncos, and will be take over the Souths top job for the start of the 2022 season when Bennett steps aside.

Bennett and Demetriou are expected to speak every day over the next couple of weeks, while Bennett, if needed, will reach out to the players directly via phone or Zoom.

There will no phone calls to Bennett from the ANZ Stadium coach's box midway through the Broncos game.

Most training sessions are filmed with a drone, which gives Bennett the chance to lend his feedback to Demetriou and fellow assistants Ben Hornby, John Sutton and Sam Burgess, who all spend time calling the shots and directing players on the field. 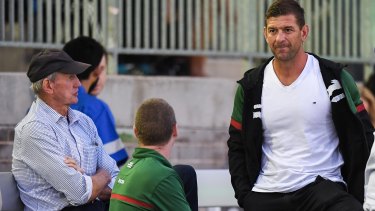 Jason Demetriou, right, is expected to be given full control while Wayne Bennett is in isolation.Credit:NRL Photos

Souths insiders know Bennett and Demetriou, 44, are like-minded from their years working together, and the two-week ban will not disrupt training as much as some rival clubs might think.

Bennett has also been known to happily delegate work, which means there will be no urge to mark his turf from the comfort of his lounge room. Bennett left his assistants in charge when he used to leave mid-season for Origin duty.

Some have even suggested Bennett will use the enforced break to freshen up mentally.

Bennett knows Demetriou is up to the job, and said on Thursday: "He'll be head coach here in 12 months time so of course he'll be up for it."

Like Bennett, Demetriou does not have a huge opinion of Broncos counterpart Anthony Seibold, and engaged in his own war of words with the former Souths boss last year.

Demetriou let rip on the eve of last year's finals when he said of Seibold's time in charge at Souths: "On the biggest stage in the biggest games, their attack fell down ... they went from the best attacking team in the comp to a team that couldn’t score points when it mattered".

Bennett could not help himself have his own little parting shot at Seibold on Thursday when he said fullback was always Darius Boyd's best position, but "I think he had to be ranked about the fifth-best fullback in the club there, didn’t he?"

Meanwhile, Souths skipper Adam Reynolds spoke about the loss of power he experienced in his right arm, and how he expected the returning and rampaging back-rower David Fifita to test him out early in defence.

"He likes to run at me Dave, so it will be nothing new," Reynolds told the Herald. "He always gets vocal and let's me know, 'I'm coming for you the whole 80'. 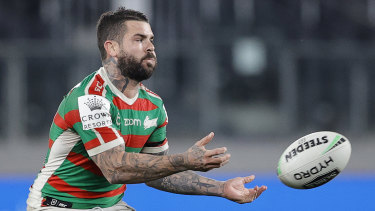 "I won't change anything. I'll still get my body in front.

"He'll have a major impact for them. We actually need to contain him and send some traffic his way. He's coming off a lengthy stint and we need to test his lungs out and take away what he does best, which is running the ball."

Reynolds said he felt tingles down his right arm after picking up a "burner" against St George Illawarra last Thursday, and while he failed to regain power in his arm for a few days, it was nothing compared to a similar bump he picked up during a 2016 Origin game.

"There were tingles and I lost power, but the doc was always confident it was nothing serious," Reynolds said. "I didn't do any contact on Monday, I was just running and keeping the body moving, and then I did some contact Tuesday and again at the captain's run. It felt good. I had big Jed Cartwright run at me and he tested it out."

Bennett said of one-time Souths target Fifita: "We all know the type of player he is and what he can do. Obviously he accepted a great deal to go to the Titans, we tried to get him here. We're confident in Jack [Johns] defending him."

Koeman Pro 3:0 with Celta: Proud of the team. The results show that we are on the right track
Milan extended their unbeaten streak to 18 games by beating Rio Ave on penalties in the Europa League qualifier
Arteta on Manchester City in the League Cup: Arsenal are not very lucky with the draw. This is another test
Klopp about losing to Arsenal and Liverpool in the country of dreams, you have to score. Last pass failed
Muller held the UEFA ceremony in the stable. There had Neuer, Kimmich and Evangeliski
Liverpool 4 seasons in a row, cannot get past the 5th round of the League Cup and 2012 wins the tournament
Leno - first Arsenal goalkeeper in 8 years not to miss at Anfield
Source https://www.theage.com.au/sport/nrl/demetriou-gets-taste-of-rabbitohs-role-after-bennett-breach-20200806-p55jb0.html?ref=rss&utm_medium=rss&utm_source=rss_feed