The investigation into corruption at the WA Department of Communities has uncovered a third alleged accomplice of former executive Paul Whyte.

Mr Whyte will have more charges added to the 530 he pleaded guilty to after his role in a $22 million rort – Western Australia's biggest ever case of public sector theft – was discovered. 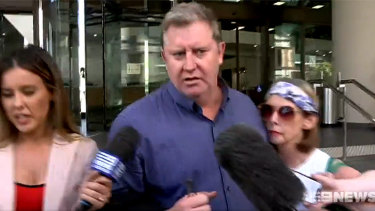 Paul Whyte was charged over what has been touted as one of the worst cases of public corruption in the country.Credit:Nine News Perth

WA Police will allege a 57-year-old-man entered into an arrangement with Mr Whyte, and have charged both the East Fremantle man and Mr Whyte with 16 counts of Public Officer Acts Corruptly.

Under that arrangement, police allege the man created a company and submitted 16 fraudulent invoices between February 2017 and June 2018, which it will be further alleged were approved for payment by Mr Whyte.

WA Police spokesman Samuel Dinnison said the man was charged with the offences despite not being a WA government employee, because he was party to the offence committed by a public officer.

Mr Whyte is accused of working with physiotherapist Jacob Anthonisz, 43, to raise false invoices for three shell companies dating back to 2008, while bookkeeper Paola Colangelo, 45, has pleaded not guilty to nine counts of corruption over her alleged role in the scandal. Mr Anthonisz has not yet been required to plead.

The East Fremantle man was was arrested last week and is due to appear in the Perth Magistrates Court on Thursday, July 30.

Spain, Germany and France have two clubs in the 1/4 final of the Champions League, England and Italy have one each
In the last three meetings of Barca and Bayern in the playoffs, the future winner of the Champions League passes on
Chelsea conceded 7 goals for the first time in two matches of the play-off series in European competitions
Buffon-Pirlo: Now I have to call you mister!? Good Luck, Andrea
Insigne is the first Italian to score for real at the Bernabeu and Barca at the camp Nou
All 11 Barca players touched the ball before Messi's goal against Napoli
Cakir cancelled out Messi's goal and awarded penalties to Barca and Napoli
Source https://www.theage.com.au/national/western-australia/department-of-communities-corruption-investigation-uncovers-another-alleged-accomplice-20200713-p55bnk.html?ref=rss&utm_medium=rss&utm_source=rss_feed