Melbourne Storm have lost plenty of key players since 2016 but the departures haven't diminished their strength or stopped them challenging for the premiership, as they prepare to play their fourth NRL grand final in five seasons on Sunday night.

Storm coach Craig Bellamy said the example set by the team's stars over the years had created the foundation for the next generation to succeed, as the Storm have lost between three and five regular first-grade players each season during this remarkable run, yet have developed quality replacements.

"I think our club has been very, very fortunate but, in saying that, the club recruited those players as very young kids and they are the guys who made our club what it is," Bellamy said.

"I'm talking about Cameron Smith, Billy Slater, Cooper Cronk and Ryan Hoffman who have worked really hard to make the most of that talent and it has rubbed off on the other players.

"The players who come into our club and don't see that, they don't hang around too long." 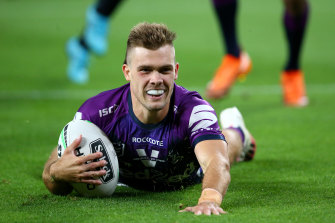 Storm's Ryan Papenhuyzen scores a try during the finals. Credit:

The players would say Bellamy’s coaching and the recruitment and development work of the team’s staff were just as vital.

Slater, who retired after the 2018 grand final, has continued to help Storm develop their outside backs with current star full-back Ryan Papenhuyzen praising Slater's guidance.

Slater said the example set by Smith and his deputies Jesse Bromwich and Dale Finucane set the standard for newcomers.

"It's a wonderful place to be involved in and when you turn up, you have no option but to work hard," Slater said.

"People like Cameron Smith, Jesse Bromwich and Dale Finucane - they are the hardest workers I've seen and when your leaders are doing that, it just filters down.

"It's incredible the way the club has been able to sustain its success."

Smith's eight grand final appearances and four each for Jesse Bromwich and Finucane shows the stability at the top but the list of departed stars is lengthy.

The Storm lost three starters and a reliable bench player following the 2016 grand final, they lost club legend Cooper Cronk plus two starting forwards and a key reserve from 2017's premiership side, then lost another two legends to retirement in Slater and Hoffman in 2018 along with State of Origin prop Tim Glasby. 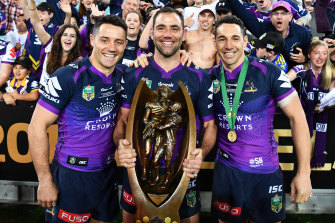 Cooper Cronk, Cameron Smith and Billy Slater; Smith is the only one left at Storm.

Yet each time the Storm have had new players developing in their own ranks or have signed lesser-known players to fill those holes.

Papenhuyzen has become a star after taking over from Slater while former full-back turned half-back Jahrome Hughes has become a steady performer while learning how to play the position.

When it comes to recycled talents, journeyman centre Brenko Lee started the pre-season on a trial deal but has barely put a foot wrong and will start in his first grand final.

The Storm will lose Vunivalu (Rugby Australia) and Fa'asuamaleaui (Gold Coast) after this game while star winger Josh Addo-Carr wants to go home to Sydney.

Smith expects to use the early off-season to decide whether to play on, and while the Storm would happily have him continue, if he departs then Brandon Smith and Harry Grant are ready to take his spot at hooker.

Like Cronk and Slater before him, Smith is irreplaceable but the Storm have managed to develop two potential players who are ready to make their own name in the role.

Flick about 1:1 with Atletico: after Muller and Gnabry came on as substitutes, Bayern added to the movement
Muller scored his 47th goal in the Champions League and moved into 10th place ahead of Inzaghi. Zlatan and Shevchenko have 48 goals each
Liverpool and Porto broke into the Champions League play-offs - there are already 8 teams. Which ones? And who is about to be added to them?
Now Liverpool are also without Alisson. The group was won by his 22-year-old substitute with 0 minutes in the Premier League and the Champions League
Diego Simeone: In three games where there were draws, we deserved more
Conte on victory over Gladbach: We beat the group leader and are still alive
Klopp on the victory over Ajax: One of the most important matches of the Champions League in my time at Liverpool
Source https://www.smh.com.au/sport/nrl/despite-regularly-losing-stars-the-storm-factory-just-keeps-them-coming-20201024-p56861.html?ref=rss&utm_medium=rss&utm_source=rss_feed

‘It’s really scary to be in a psych ward’

Actor formerly known as Ellen Page announces he is transgender

‘He should be shot’: Shocking remark

Giuliani said to have discussed pre-emptive pardon with Trump