The coronavirus pandemic is expected to claim almost one in 10 jobs in Australian universities, diminishing the tertiary sector's research capacity and reducing its ability to teach the next generation of domestic students.

Research by the University of Melbourne’s Centre for the Study of Higher Education has found Australia’s public universities have lost $3.8 billion in revenue this year. 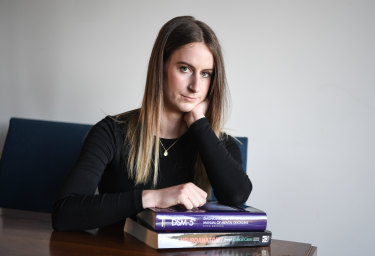 Lily Watson is studying a master's degree in clinical neuropsychology at La Trobe University. The course is being discontinued.Credit:Justin McManus

In response, they have culled about 5600 full-time equivalent jobs. An estimated 17,500 casual and researcher positions are also predicted to go.

The scale of lost jobs equates to 9.5 per cent of Australia's entire higher education workforce. 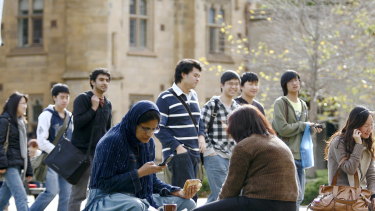 The research paper, Australian university workforce responses to COVID-19 pandemic, noted that universities were going through their worst crisis since the Great Depression but had received "little sympathy" from the Morrison government, "notwithstanding the sector’s status as Australia’s third-largest exporter".

Universities have begun to make painful decisions about course offerings as billions of dollars in revenue from international students disappears.

Lily Watson is in her first year of a master’s degree in clinical neuropsychology at La Trobe University, and full of ambition for what she will do with her qualification at the end of next year.

"I’d love to get out into the field and work in the justice area," she said. "There are a lot of people with brain injuries who are involved in the criminal system and I’d like to support them to re-engage with the community and manage their functioning."

But Ms Watson could be among the last neuropsychology graduates at La Trobe. The university has suspended enrolments for next year, in a "difficult decision" it said was driven by economic necessity.

"While we recognise this is a degree highly valued by the neuropsychology community and those who benefit from the services provided by graduates, the program has been making a significant financial loss as it is very expensive to run," a university spokesperson said. "In the current environment, this is not sustainable."

The university will consider reintroducing the degree in 2022 if it can find a way to minimise financial losses.

Ms Watson has launched an online petition against cutting the program that has gathered more than 2000 signatures.

Dana Wong, a senior lecturer in clinical psychology at La Trobe, said cutting the program was not a strategic move, even when universities are being forced to make tough decisions because of a lack of funding or government support.

"Training a skilled and specialised psychology workforce is more important than ever, especially in a COVID 19-affected world where mental health and brain function are both at high risk," Dr Wong said.

Sam Gibbard, president of the RMIT division of the National Tertiary Education Union, said the university's college of business and law was considering discontinuing courses but had not yet said which would be cut.

"They're talking about cutting courses at the moment and also in their proposals they're trying to reduce the number of senior academics on staff," he said.

An RMIT spokesperson said that this year some of the university's programs had not run because of low student demand, while new ones had been introduced.

Monash University has confirmed its proposal to discontinue 103 units of study.

Other universities The Age approached said they had not yet culled degrees or units of study.

With international students not expected to return in large numbers next year, the federal government committed $326 million this week to fund an extra 12,000 domestic places.

Its Job Ready Graduates Bill, at risk of being blocked in the Senate after Tasmanian senator Jackie Lambie rejected it, is also an attempt to add 100,000 places over a decade, while raising fees for some courses and reducing them for others.

Higher education expert Mark Warburton said the government's proposed funding changes would cut per student revenue by 6 per cent, but the bigger issue for universities was the decline in international students because of COVID-19.

"It wasn’t too bad first semester, it got a bit worse this semester and it looks like it's going to be substantially worse next year ... which is why, effectively, I think it's irresponsible for the government to be doing this [funding change] at this point of time."

Mr Warburton said Victorian universities had been harder hit by the decline in international student numbers than those in other states.

Higher education expert Andrew Norton said the good news was that the University of Melbourne had revised down its estimated losses.

But he said the Indian student market was a concern for Victorian universities.

"The Indian students rely on the labour market in Australia to support themselves and in Victoria that's still diabolically bad due to the lockdown," he said.

Mr Norton, a professor in the practice of higher education at ANU, described the government's university funding plans as "next year's problems".

"We are very confident there will be an increase in domestic demand, but the question is how much capacity will there be, given government policy, to take them?"

Adam Carey is Education Editor. He joined The Age in 2007 and has previously covered state politics, transport, general news, the arts and food.

Anna is an education reporter at The Age.

Sharonov joined the coaching staff of Cyprus Paphos
Yuran headed Khabarovsk SKA
Brugge forward Dennis on goal for Zenit: I said that I only score grandees, but it was a joke
PSG defender Kimpembe Pro 1:2 with Manchester United: We can only blame ourselves
Lopetegui Pro 0:0 with Chelsea: Sevilla showed a good team game
Rashford on victory over PSG: Manchester United now have a strong position in the group
Nagelsmann victory over Istanbul: Not fully satisfied with the game Leipzig was fatigue, not the most effective pressure
Source https://www.theage.com.au/national/victoria/diminished-capacity-australia-tipped-to-lose-one-in-10-university-jobs-20200930-p560mv.html?ref=rss&utm_medium=rss&utm_source=rss_national