Many Australians have good cause right now to feel they are hurtling toward an economic cliff, thrown forward by the twin forces of pandemic and recession, glimpsing the precipice ahead. 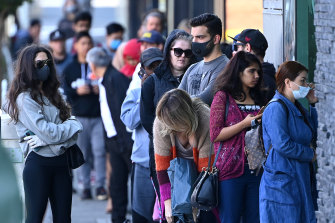 Those who have lost jobs or lost work – two crucially different things – can sense the end of the support they need.Credit:Getty

The idea of the cliff is now cemented in political debate for good reason: it is cemented in policy too. Those who have lost jobs or lost work – two crucially different things – can sense the withdrawal of the support they need.

Scott Morrison has very little time to decide how to meet a deadline he has set for himself. But his talks in Parliament House this week have laid down some guidelines on what he will do next – and what he will almost certainly avoid.

Josh Frydenberg too has been talking to colleagues about what to do next with a fiscal stimulus worth $260 billion, a figure that includes government payments as well as Reserve Bank lending.

About 1.7 million people on the JobSeeker unemployment benefit are due to receive their last coronavirus supplement – which sounds unhealthy but is a payment worth $550 per fortnight – on September 24. They would fall back to the base rate of about $555 per fortnight.

About 3.3 million people on the JobKeeper wage subsidy are due to lose this support on September 27. From this date, their employers will no longer receive the payment, worth $1500 per fortnight.

None of the government’s stimulus measures matter as much as these two payments. Most of us know friends or family on JobKeeper or JobSeeker. The dismal economic figures on Thursday, showing 824,000 jobs were lost over the past two months, confirm the real impact and risk in changing their rules. The debate within the government is not about when to halt the stimulus but about the form it should take after the deadline.

A decision has yet to be taken on whether JobKeeper should end entirely or remain in some form, perhaps with the same name, and possibly targeted at workers or industries that need the most support.

No decision has been taken to cut the JobSeeker payment to the old Newstart rate of $555 per fortnight. In fact, no decision of this kind is likely to be taken at all. The outcome, instead, will be an increase in the base JobSeeker rate to a level yet to be determined.

Warren Entsch, the northern Queensland Liberal who entered Parliament when John Howard took power, feels he is being heard on his call for an extension of JobKeeper or an assistance package for tourism and hospitality, sectors that have come to a halt in Cairns and elsewhere.

At this stage, Entsch is outnumbered by fellow Liberals who believe JobKeeper should end as scheduled. But these Liberals, such as Andrew Bragg, accept that people who lose jobs cannot be put on the old Newstart rate and will need a higher unemployment benefit.

In talks with Frydenberg this week (safely within the pandemic restrictions, with about half a dozen MPs meeting each night) there was a consensus about changing the JobKeeper rules for casuals as soon as possible.

Frydenberg has been worried for some time that some casual workers who worked relatively modest hours before the pandemic are now getting a huge income boost under JobKeeper. He has deployed Treasury to find out how many people are in this category and the most effective way of changing the rules.

This change is likely to come before the end of September and perhaps as early as July 23, when Frydenberg issues an economic update. Liberals are hearing from employers who say staff do not want to turn up for work because they are on JobKeeper. This is only anecdotal, but it influences the debate within the government.

Morrison’s language was grim in Parliament this week but the underlying message was realistic. “We will seek to do all we can, as we have with the unprecedented support. But I’m not going to make false promises to the Australian people,” he said.

“We have cushioned the blow but we can’t prevent the blow, and we will be doing everything we can to ensure that those who do lose employment, gain employment.”

Some workers are in jobs that survive in name only while the wage subsidy continues. The government cannot be certain how many will shift to unemployment benefits, but the shift is inevitable. Will these workers see their payments fall from $1500 to $1100 per fortnight or something lower?

JobSeeker is not a single payment alone. It comes with other benefits, like rent assistance, and is meant to provide support to find new jobs. Morrison believes the training and employment support will help when new jobs arise, but this assumes the government can deliver practical services to millions of people on a scale never needed in recent years.

We will seek to do all we can, as we have with the unprecedented support. But I’m not going to make false promises to the Australian people.

Some of the new unemployed will be strangers to the Centrelink office and the “mutual obligation” rules. They will not thank Morrison if they are tossed into a punitive regime at the same time their support payments are slashed.

One principle is that now is not the time to lock in stimulus spending that will be difficult to unwind. The Parliamentary Budget Office suggests net debt will reach 15 per cent of economic output, or about $550 billion, within a decade. Morrison wanted a “scalable” stimulus on the way in and seems to want the same on the way out.

Nothing is decided yet. The twin forces at work, pandemic and recession, are too difficult to predict too far into the future.

Morrison's response to the jobs figures on Thursday was to send another reminder about the need to take time with any response.

While some fear Morrison will lead the country over the stimulus cliff in September, his colleagues know this is a certain way to lose the next election. Everything Morrison has done in his political career has shown that he plans ahead and usually outflanks his critics, and not only when the objective is the prime minister’s office or an election victory.

One Liberal notes that Morrison never has only one path to achieve his ends: “He always has another plan.”

The sheer scale of the stimulus is likely to peak in September, but the government’s own interest, as well as the national interest, is in finding the path down from the summit. Morrison has no intention of stumbling over the edge.

Кад Cadiz returned to La Liga after 14 years
Pioli about 2:2 with Napoli: One point is a good result
Gattuso on Milan's penalty: the Rule needs to change. Jumping with your hands behind your back is another sport
Milan will offer 25 million euros for Celtic defender Ayer
Klopp on plans: Four years at Liverpool. After that, I want to do nothing for a year
Rogers Pro 1:4 with Bournemouth: Leicester play well only 45 minutes after the break
Inter and Roma are Interested in Garay
Source https://www.smh.com.au/national/disentangling-stimulus-payments-comes-with-extreme-political-risk-20200618-p553wh.html?ref=rss&utm_medium=rss&utm_source=rss_national

From the Archives, 1995: Flagging reconciliation

ADF members in self-isolation at base after attending Sydney pub