A senate standing committee on economics held a hearing on Thursday afternoon about the proposed fund, which the big banks have committed funding towards in order to provide an alternative form of funding for small businesses. 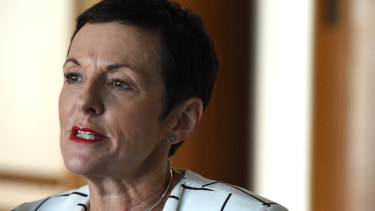 Groups representing private investors are pushing for an amendment to the fund proposal that would mean instead of simply advancing capital to businesses, the fund would underwrite, or guarantee, a portion of capital to a business and then make an investment offer to the broader community to give them the opportunity to buy in.

Under the amended model, the growth fund would be able to invest to bridge the gap in required funding once the appetite from mum and dad investors, private equity funds and venture capitalists had been tested.

"The fund would conduct due diligence and determine which businesses are investable. The fund would guarantee a certain amount of equity subject to making an offer to all legally eligible Australian investors, so they have the opportunity to buy in," chief executive of fundraising platform OnMarket Bookbuilds, Ben Bucknell said.

OnMarket's proposed amendment to the scheme has been backed by the Australian Shareholders Association, which wrote in a submission to the senate committee that it did not want the fund to lead to the "disenfranchisement of retail investors" who might want to buy in to a small business but would be excluded from opportunities as the growth fund matured.

She said the reason the growth fund had not been set up to offer investment opportunities to private firms first was that it was aimed at businesses that were often overlooked by venture capitalists and other investors.

"You need the growth fund to have a really clear view that they’re not planning to stay in the business in the long term or take any controlling interest," she said.

The fund's current model aims to expand so-called "patient capital" opportunities by offering businesses funding without the need to give over a long-term equity stake to the fund.

The business growth fund will include an initial $100 million investment from the federal government with the big four banks also pledging $100 million each giving it a half billion dollar war chest.

"The focus is seriously just on helping an SME grow to a point where they don’t need the equity investment," Ms Carnell said.

Other investment platforms have said they are not as concerned about the potential for the fund to cut out existing investors.

Birchal co-founder Matt Vitale said  in the UK, about the same amount of investment has been made through its business growth fund as through crowdfunding since 2011.

"We don't see an Australian growth fund as a threat, but a potential key partner in our mission to improve access to funding for Australian businesses," he said.

The growth fund bill is sitting before the senate and the senate committee is due to report on February 21.

Emma is the small business reporter for The Age and Sydney Morning Herald based in Melbourne.

Gunman remains on the run in Perth

'As South Sydney as they come': Rabbitohs set to make Reynolds captain

‘Again and again, the science shows Labor’s plan is a fraud’: Bolt

Police shot at in Gosnells pursuit

Sleeper agent operated in Australia for years before ASIO caught him

The anti-Greta: US conservative think tank takes on the global phenomenon

Athletes watch and wait on coronavirus in Tokyo

Australia must hit net-zero by 2050 to meet Paris: scientists

Coalition must follow Albanese on target of net zero by 2050

Kate, Luke and Roozi 'lived, laughed and loved' together

'I miss her hugs': Cindy's family remember her as a 'wonderful mother'

Red, yellow, green and purple: Meet the new bin in your yard

Ambitous plans for Adelaide Ace with Guineas call due by midweek

Confident Sanders predicts Texas victory in primary (and in November)

'Give them a chance': Ninkovic wants more youngsters in A-League not lift in foreigners

How Max Gawn went from class clown to Melbourne captain

The Short Squeeze: Earnings, coronavirus and Bernie Sanders give investors plenty to ponder

Clenton and Jones set for a golden day in Tamworth

Global Left has nothing to say in this alien populist landscape

Don’t go too budget on your child's first smartphone

Meet the pie with no meat, just a 'delicious plant-based filling'

Delbridge available after ban if Mombaerts risks his 'emotions'

Is the coronavirus the 'Black Swan' event that blows up the US market?