So we’re on a war footing. Who knew?

Of course, it’s not said explicitly. It’s not even whispered. But let’s not retreat from what’s staring us in the face. It’s there in the spaces between the lines of the military updates. It’s there in the calculus of weaponry. And, most easily, it can be found in the money trail, $270 billion in defence spending, to be precise, give or take a tank. 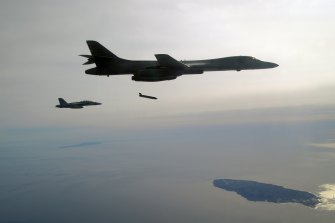 A US Air Force plane releases a Long Range Anti-Ship Missile (LRASM) during a test event. Australia is planning to buy 200 missiles to arm its air force.Credit:US Navy

You can hear it in the gun-grey steely determination of those making the pronouncements. “The simple truth is this: even as we stare down the COVID pandemic at home, we need to also prepare for a post-COVID world that is poorer, that is more dangerous and that is more disorderly,” said Prime Minister Scott Morrison last Wednesday.

It seems we can no longer be passive; we must be aggressive. If we don’t step up and assert ourselves we’re going to be punched on the nose so hard by that [insert name] bully we won’t be able to breathe.

The barrage of cash signalled the nation’s “ability and willingness” to strut our military might. Look at our power. Deterred?

Well, somewhere on the planet someone with an equivalent population base and military might be. But let’s not be coy, the name of the bully is China – our largest two-way trading partner.

So we have to walk the trapeze. Defence Minister Linda Reynolds a day after the Morrison launching said we welcomed the economic rise of China and encouraged it to be a ‘‘productive and a peaceful partner in our region”.

However. ‘‘Australia has watched closely – as China has actively sought greater influence in the Indo-Pacific. We have supported China where that pursuit advances mutual interests in security, in prosperity and in stability.’’

However. Don’t push us around. Which in itself is a good thing. National pride and all that. But let’s be realistic. Look at the numbers. China has more than 2.1 million military personnel with another half a million in reserves. It has more than 1200 fighters. It has 3500 tanks, 33,000 armoured vehicles, 2800 self-propelled artillery, 3600 towed artillery, it has 2 aircraft carriers, 36 destroyers, 52 frigates, and 74 submarines. Oh, and it has nuclear weapons.

According to Reynolds, ‘‘Defence directly employs 116,000 Australians in the Australian Defence Force and the Australian Public Service.’’ And, she says, we’re going to be hiring another 800 ADF personnel in the next four years. So, there’s no chance of us being over-run from an invasion.

Now one can appreciate if you’re proclaiming the spending of billions of dollars you’ve got to be assertive. Brave new world, different from the sclerotic old world, needs a different muscular posture. What better action than increasing the arsenal.

But talk of war has an unhappy consequence of, sooner or later, turning into war. I’m not pointing this out as a devotee of John Lennon’s utopian Imagine. While Reynolds speaks of Australia staying committed to the ‘‘careful management of’’ its relationship with China, shaking a quiver of missiles at it surely isn’t the way forward.

China’s trampling of human rights, its strangulation of freedom of expression and thought, its defence of its dominion, and its extension of influence, requires smarter thinking than tipping a large barrow of money at it and hanging faux tough.

In 1933, the year Adolf Hitler became Chancellor of Germany, Siegfried Sassoon, the decorated WWI veteran and poet, published The Road to Ruin. It was a series of vignettes, written with the pen and ink of despair as war clouds again gathered over Europe.

It begins with this:
My hopes, my messengers I sent
Across the 10 years continent
of Time. In dream I saw them go, –
And thought, ‘When they come back I’ll know
To what far place I lead my friends
Where this disastrous decade ends.’
Like one in purgatory, I learned
The loss of hope. For none returned,
And long in darkening dream I lay.
Then came a ghost whose warning breath
Gasped from an agony of death,
‘No, not that way; no, not that way.’

Advocates of greater defence spending can no doubt give myriad reasons as to why Australia needs to spend billions. But let them look at a homeless man or woman and say, but we bought the rocket so that you could enjoy your freedom. Perhaps the homeless might say, no not that way.

Warwick McFadyen is a desk editor at The Age.

Thomas Tuchel: If both legs were intact, you could have seen my 40-meter sprint
PSG saved Tuchel's pet: Choupo-moting got everyone for free, managed not to score from a centimetre, and now pulled Paris to the semi-finals of the Champions League
Gian Piero Gasperini: The worst part is that we were so close. I can only thank the guys
Neymar was the player of the match Atalanta-PSG. He gave an assist
ПС PSG suffered through the entire quarter-final and turned it over in 149 seconds. Lifted the Italian curse and went so far in the Champions League for the first time in 25 years
ПС PSG's pain was transformed into happiness: in three minutes, the suffering stars turned into celebrating kings
The club from Italy won't win the Champions League for the 10th year in a row. This is an anti-record
Source https://www.smh.com.au/national/do-we-want-our-freedom-bought-this-way-20200703-p558uh.html?ref=rss&utm_medium=rss&utm_source=rss_national

Sollykeeper: Billionaire Lew gives retailers a lesson on how to win during COVID

Pay freeze for MPs with 234,800 Queenslanders out of work

McGregor's sacking the right decision... about a year too late

Stage four lockdown offers a chance to find our path out

Football For Fires charity match cancelled due to COVID-19

Waterhouse focuses on the Up And Coming instead of trials

Queensland man charged with defrauding $10 million from his employer

The alarming statistics showing the Waratahs can't back up big wins

Starc adds muscle in effort to get speed gun up

NRL star stood down after walk out

Jolted into the 21st century, AMP faces its cultural awakening

Horse at centre of viral text wins like Winx

Bring your own poetry to this saga of familial love

Complaints to state's corruption watchdog to be kept secret before elections

Binna Burra to reopen for visitors one year after fire devastation

Goodman defies pandemic with $1b profit as e-commerce demand builds

Victory will rise after 2020 debacle

'It's hard not to be excited': Berry's spring stars return

Cats weighing up whether Dangerfield can follow the Lethal model

Doedee out for season in another Crows blow

'I wasn't comfortable with it': McGregor's last straw at the Dragons

'We hope our inspiration is infectious': Moulin Rouge set for 2021

From the Archives, 1980: Political murder in a quiet Sydney street

‘I wasn’t dealing with it’: Sacked Mary breathes fire at Dragons over selection fiasco

Jacinda’s 'be kind' message passed by some people entirely

Crash through or crash trying: The strategy behind rugby's power play

Socceroos grounded for 2020 as next year fills up fast

One million people out of work for first time: ABS

Man of Contradictions: Joko book a warning to Australia about a pragmatic president

No sex, please. I may be a vampire but this is Twilight

Glamour and destruction live side by side in Beirut. But has it finally reached breaking point?

'Danger on the doorstep': No sign of Queensland border opening any time soon

Victorian council elections likely to be postponed amid COVID-19 risks

Racing.com a blueprint for other sports, says Seven boss

Massive rebuild on horizon for Victory after dispiriting season

Three Qld regions where almost half of businesses rely on JobKeeper

Chapter and diverse: SBS's Hungry Ghosts goes all out for authenticity

Give low-income parents a school choice: that's the key to equity