Brisbane Lions midfielder Jarrod Berry went the direct route when challenged over whether his club has an unfair advantage due to the migration of the Victorian clubs to Queensland.

The Horsham-raised Berry didn't mince words on Thursday ahead of his club's clash with Greater Western Sydney Giants in Sydney on Saturday.

He also reminded AFL supporters nothing is certain as the COVID-19 pandemic continues to play out. 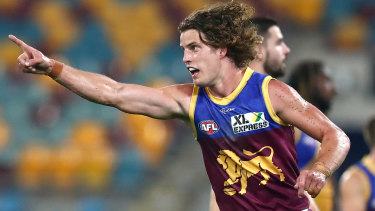 "It's one of those things, do you want footy to keep going or do you want nothing on TV?" Berry said.

"It's a season no one can predict. No one can foresee what will happen in the future. For all we know we could be going to Darwin in the next few weeks.

"We are all up in the air, as much as everyone else is, and it will be the most adaptable club with the whole squad mentality who will benefit most from this season being thrown around Australia."

The Queensland Government continues to press the AFL to be awarded the grand final should Victoria be unable to host it in October.

The Lions rate among the premiership favourites and while Berry didn't buy into the question of their chances, he did dare to dream about running out on the Gabba in the grand final.

Imagine if we could get in the grand final and have a home ground grand final? It would be great for Brisbane as well.

"Imagine if we could get in the grand final and have a home ground grand final? It would be great for Brisbane as well. But that's way down the track and we are not looking at that yet."

Berry admitted the Lions do have some advantages with a home crowd behind them and less travel, he and several Lions know plenty about moving away from home so he sees that as less of an issue when there is a job to do.

"With players being away from their families and stuff, it will be a bit of an advantage, but there is not too much of that when you are out on the field, those things don't really weigh on your mind then," Berry said.

The third-placed Lions will be looking to bounce back from a disappointing loss to Geelong last start that included a poor third term, which saw the Cats kick seven unanswered goals.

"It was a blip for us but we haven't had a quarter like that for three years," Berry said.

"We went through it thoroughly and looked at those key moments we missed.

"We took a bit out of how the Geelong leaders responded when we had the momentum in the second quarter."

Berry added both Hugh McCluggage and Mitch Robinson have trained well and are chances to play.

The Giants are rising up the ladder so both sides will be looking to show where they stand in the premiership race.

"We love testing ourselves against the best. We've had three games now against very good football sides," Berry said.

"There have been a few blokes in good form but we never take teams lightly or underestimate other midfields.

"They have some absolute stars and it will be won or lost in the hunt this week. It's something we really look forward to."

Berry also had some positive words for his brother Thomas and his fearless attack on the ball.

"He was always head over the footy and crashing in, you can see it with how we plays today," Berry said.

"He's hard as a cat's head and will put his head over the ball when he needs to.

"He brings that pressure and some of the things he does are manic - he prides his game on those team lifting moments."

Ødegård prematurely returned to the real world of rental Sociedade
Arsenal and Roma are discussing the exchange of Torreira for diavar
The trained bear was brought to the dressing room of the Sakhalin Resident
De Ligt had shoulder surgery and will miss 3 months
Modibo – infected with coronavirus Barcelona player. The disease passes without symptoms
Lichtsteiner finished his career. The former Juve and Arsenal defender is 36 years old
Matuidi left Juventus. The midfielder will move to Inter Miami Beckham
Source https://www.theage.com.au/sport/afl/do-you-want-footy-to-keep-going-or-not-victorian-raised-lion-speaks-up-for-queensland-20200716-p55cqg.html?ref=rss&utm_medium=rss&utm_source=rss_feed