Parramatta’s NSW Origin trio will back up on Monday, but star five-eighth Dylan Brown remains under a fitness cloud because of an ankle injury.

Brown was spotted by TV cameras in a moonboot last week when he visited teammates Reagan Campbell-Gillard, Ryan Matterson and Junior Paulo in Coogee where the Blues were based.

Eels coach Brad Arthur said Brown would not have played last week had the Eels not had the bye and now needed to prove his fitness for the clash against western Sydney rivals Canterbury on Monday.

Arthur gave all his players five days off for the first time during the bye round, and Brown used the time for a hit-and-run trip back to New Zealand.

If Brown doesn’t play, Jake Arthur will slot into the halves.

“He hasn’t done a heap of training with us and, had we played last week, he wouldn’t have been right to play,” Arthur said of Brown, who has arguably been Parramatta’s best this year. 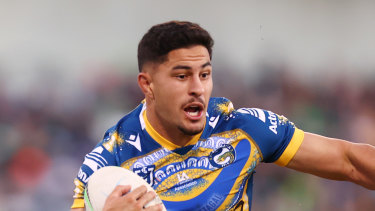 Parramatta five-eighth Dylan Brown is under an injury cloud.Credit:Getty Images

“There are a couple of blokes who would have been in that boat.

“He rolled his ankle and stirred up some scar tissue. With the moonboot, players go into those as a precaution and just to take some weight off his foot. We were lucky we had some time on our hands.

“If he’s right to play, he will play. That’s what they get paid to do, play.”

Arthur said the opening three months had been a tough slog and this had influenced his decision to give the squad a break.

The time out will no doubt come in handy on the eve of the finals, when the Eels have traditionally struggled to find that next gear.

“I think it’s been 12 tough weeks. Every week this year teams have come after us, and the standard of footy has been better,” Arthur said.

“The bye came at a good time and the boys earned the right and trust to have a fair chunk of time off. They’ve come back fresh. We haven’t had five continuous days before, but we thought we’d give it a shot and look after their bodies.

“They were keen to come back, which is a good sign.”

Winger Maika Sivo plays his first game of the season after a few weeks working his way back from knee surgery in reserve grade, and Arthur said of his Fijian cult-hero: “He’s had three games back in Cup, he’s finished off some nice movements, scored a couple of tries, and he’s ready to go.

“He’s a big body, he’s hard to handle, and that will help us out of the back field and take some pressure off ‘Gutho’ [Clint Gutherson], too. The speed and intensity of the game will be the next step for him, but he can’t have done anything more to be ready.”

While Paulo, Campbell-Gillard and Matterson will all definitely start.

Queensland Origin skipper Daly Cherry-Evans will not back up for Manly on Sunday afternoon against the Wests Tigers because of a quad strain he suffered during the Maroons’ 16-10 win.