Erratic Perez under fire after crashing into F1 teammate

Force India team principal Otmar Szafnauer has read the riot act to Sergio Perez, describing his erratic performance at the Singapore Grand Prix as "unacceptable" after the Mexican pushed his teammate Estaban Ocon into the wall on the opening lap.

Perez ended the Frenchman's race after just three corners, held up Ferrari's Sebastian Vettel and had another collision with Sergey Sorotkin's Williams before he eventually crossed the line in 16th place after an eventful grand prix. 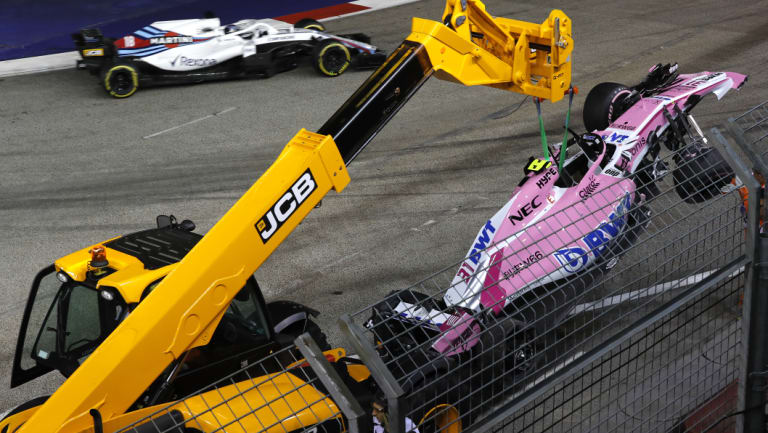 Bad books: A crane lifts Esteban Ocon's damaged Force India from the track after he crashed with teammate Sergio Perez.

"You say to them that's unacceptable, there's enough room on the left-hand side as I could see. You've got to give your teammate enough room," an angry Szafnauer told reporters.

"If it's somebody else and it's not your teammate, it's a racing incident. But if it's your teammate then you've got to give him room.

"If they continue to do this even on lap one then there's other ways to separate them which we hope we don't ever have to employ."

Perez apologised to his team over the radio soon after the safety car was deployed when Ocon crashed out, the Mexican saying he was unaware who he had made contact with during the chaotic start to a race won by Lewis Hamilton.

"It was a very unfortunate incident, one of those it is very hard to avoid," said the Mexican, who had started seventh on the grid after a strong qualifying session.

"As I am picking up the power I just get a clip from one car - I had not even realised that was Esteban - and then as I get a message from the team I was very sorry for that. A very hard day for us.

"And then with the strategy we were having a tremendous first stint, opening a big gap to the car behind, but then we got stuck in traffic and it was very hard to get by Sirotkin," he added.

"I don't think I have much to say (to Ocon). I am just very sorry for the day the team had in general. I wish I could have seen Esteban there or have done something differently there.

This is the best Milan in years: superkambekom with Juve (3 goals in 5 minutes!) saved the intrigue in Serie A
Zlatan Ibrahimovic: I am the President, player and coach! If I had been in Milan since the start of the season, we would have taken the scudetto
Sarri on the defeat by Milan: we played first-class football for 60 minutes. Then-turbidity
Pioli on the victory over Juve: Milan became a team. We can play even better
Pioli beat Juventus for the first time as a coach
Vardy has scored 10 goals for Arsenal in Premier League matches. Only Rooney has more
Ronaldo scores or gives an assist in 17 consecutive Serie A matches, where he scored 25 (21+4) points
Source https://www.canberratimes.com.au/sport/motorsport/erratic-perez-under-fire-after-crashing-into-f1-teammate-20180917-p50460.html?ref=rss&utm_medium=rss&utm_source=rss_feed