Essendon will go to the tribunal to appeal the two-match ban offered to star midfielder Dylan Shiel, while Richmond's premiership star Marlion Pickett has escaped with a fine for his head-high bump on Sydney's Isaac Heeney.

However, in yet another head-high bumping incident, Port Adelaide's Brad Ebert has been offered a one-match ban for engaging in rough conduct on GWS' Harry Perryman. 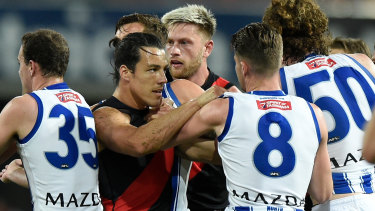 Dylan Shiel during Essendon's win over the Roos. Credit:Getty Images

Both Perryman and Heeney recovered to resume their matches. Pickett escaping a ban is significant for the Tigers, who are without a series of premiership players due to injury and family reasons.

The former GWS player Shiel, who has starred in the Bombers' rise up the ladder in 2020, was offered the ban for his bump on North Melbourne's Curtis Taylor on Saturday night.

However, on Monday morning an MRI of Taylor's face cleared him of a facial fracture.

Match review officer Michael Christian graded Shiel's bump as careless conduct, high contact and high impact. Taylor came from the field for an assessment but played out the rest of the match.

Essendon could reduce the ban to one week if it is downgraded to medium impact, for example. The Bombers play the Western Bulldogs on Friday.

St Kilda's Ben Long will also face the tribunal on Tuesday for his bump that left Fremantle's Sean Darcy with concussion.

Christian also said contact between GWS' Aiden Corr and Port Adelaide's Todd Marshall was not worthy of a sanction.

"Marshall pulls Corr's left arm downwards and simultaneously Corr pushes Marshall's head into the ground. It was the view of the match review officer that Corr's actions did not constitute a reportable offence. No further action was taken," an AFL statement read.

"I want to address the Luke McDonald and Conor McKenna incident from the weekend," Roos coach Rhyce Shaw said on Monday.

"It's not on. And not something we stand for."

The AFL indicated it would look into the incident.

Arsenal have offered Willian a 3-year contract
Aurier agreed to move to Milan. Tottenham want 20 million euros for a defender
Can-Casillas: One of the greatest is leaving the stage. You have always been an example, my friend!
Atletico President: Simeone is great. He constantly brings victories and titles
Bayern goalkeeper Fruchtl can go on loan to Nuremberg
Liverpool can buy Norwich defender Lewis for 10 million pounds as a competitor for Robertson
The Europa League returns today. We remember where everything stopped
Source https://www.smh.com.au/sport/afl/essendon-to-appeal-shiel-s-ban-20200713-p55bme.html?ref=rss&utm_medium=rss&utm_source=rss_feed