Michelle Portlock is one of the human faces behind warnings Australia faces a mental health and suicide crisis fuelled by the triple-whammy of the pandemic, lockdown isolation and recession.

Ms Portlock, 49, is battling a relapse of the depression that "nearly destroyed" her when she was medically discharged from the police force in 2011. As a widow with four children and no job, she was forced to sell her house. 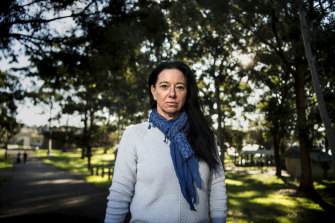 Michelle Portlock, 49, is battling a flare-up of depression during the pandemic crisis.Credit:Steven Siewert

She twice went to hospital because of suicidal thoughts and saw the distress that caused her children.

"I've been medication free and working and now COVID has come along and that rug has been swept from under my feet," she said.

"I am determined never to go back to that dark, very dark place because once you get there, it's very hard to get out of."

It has been a rough year so far. In the past few months, she has been stood down from her job at the airport, had one son go to jail for a driving offence, and another son develop brain cancer. Pandemic restrictions hindered her ability to attend court hearings or hospital appointments.

Before JobKeeper kicked in, she fell behind in her rent and Wesley Mission helped her financially.

Suicide Prevention Australia (SPA) and Wesley Mission will on Monday release a joint white paper on reducing distress in the community following the COVID-19 pandemic.

The report finds Australia has increased suicide risk because of three factors. First, the economic downturn with higher unemployment and financial stress is known to raise suicide risk, especially for men.

Second, social isolation has increased the risk of family violence, with victims known to be at increased risk of suicide.

Third, increased social isolation has raised the risk of substance abuse, which is also correlated with higher rates of suicide.

SPA chief executive Nieves Murray said increased suicide risk "absolutely did not" have to lead to increased deaths by suicide, because it depended on our response.

The white paper calls for the government to increase the base rate of JobSeeker and maintain the JobKeeper payment in a targeted way beyond the end of September.

"The unknown factor of what happens after September for people who are currently on JobKeeper is adding to an already stressful situation," Ms Murray said.

"Our call is for the government to make announcements now for those targeted industries that we know won't be able to go back to normal."

Christine Morgan, chief executive of the Mental Health Commission and National Suicide Prevention Adviser to the Prime Minister, said the government was aware of the issues raised in the report and had demonstrated its commitment through the economic stimulus packages announced to date.

"The Prime Minister gets it, everybody gets it and I would expect SPA and Wesley to be reinforcing it because it is critical," Ms Morgan said.

"There could not be more focus being done on this. Everybody is wanting the best possible outcome and it's in an environment where things can change very quickly."

The commission released its National Mental Health and Wellbeing Pandemic Response Plan in May. This included a commitment to establish suicide registers in states such as NSW that do not have them yet - these registers record probable deaths by suicide, rather than waiting two years for the coroner's findings, and are 90-95 per cent accurate.

Ms Morgan is due to release her interim report on suicide prevention later this month. She said the bushfires, pandemic and recession had heightened some risks since her initial advice in November 2019 but figures do not show a spike in actual suicides at this stage.

Wesley Mission chief executive Keith Garner said there had been an increased demand for the service's credit and debt hotline since the summer bushfires and right through the pandemic.

Ms Murray said as many parts of Australia, including NSW, emerge from lockdown that would help some people experiencing social isolation, while other people felt increased anxiety because of their own medical risk or financial situation.

Liverpool are close to buying a defender for Olympiakos Tsimikas. Medical check-up-this week
Barcelona intends to sign Bernardo Silva. City can get Semeda
Real are planning to buy Dybala and are ready to include Kroos or ISCO in the deal (Sport Mediaset)
Conte about Inter before the 1/4 Europa League: we Continue to progress, we become stronger
Piontek is Interesting to Fiorentina. Herta wants just over 20 million euros
Barzagli or Grosso will replace Pirlo in Juventus U23
Daudov about Akhmat: I am Sure that the team will Interact better with each new game
Source https://www.theage.com.au/lifestyle/health-and-wellness/everybody-gets-it-report-on-heightened-suicide-risk-points-to-hope-20200704-p558zr.html?ref=rss&utm_medium=rss&utm_source=rss_feed