Vaccination opponents have flooded senior government ministers with unprecedented levels of correspondence, as experts warn a new wave of sceptics anxious about a potential coronavirus vaccine are reinvigorating the movement.

Health Minister Greg Hunt's office and the federal Department of Health have received more than 1500 items of anti-vaxxer correspondence since April 1. Social Services Minister Anne Ruston's office has received at least 600 hard-copy letters on the subject this month. 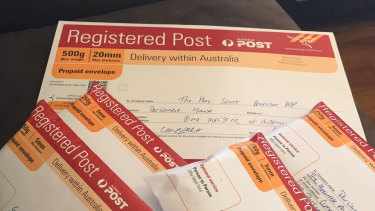 Senior government ministers have been inundated with unprecedented levels of anti-vaxxer correspondence.Credit:Facebook

Experts warn that anxieties caused by the coronavirus crisis and associated economic downturn, as well as prolonged discussions about a potential coronavirus vaccine, have revitalised an anti-vaccination movement turbocharged by star power and social media.

This month, a small group of NRL players resisted a code-mandated influenza vaccine and celebrity chef Pete Evans repeatedly backed the anti-vaccination movement on social media after he was sacked by Seven West Media.

Australia is one of the most vaccinated countries in the world, with 94.74 per cent of children fully vaccinated by the age of five, and is in the middle of a record breaking surge in influenza vaccinations amid the coronavirus pandemic.

But a small, persistent community of sceptics has existed for decades, founding political parties, pushing for media coverage, corresponding with politicians and scientists and more recently migrating to an active and disparate community of anti-vaccination Facebook groups and pages.

One such Facebook group, started by northern NSW couple Anthony and Kate Golle, is behind a significant majority of hard-copy anti-vaccination letters sent to senior ministers.

More than 35,000 users have signed up to the couple's new movement; a Facebook group which, for a donation of at least $5, offers legal information and template letters to send to senior members of government.

Mr Golle said the couple was opposed to "mainstream media stories as the plot gets twisted ... that we are supposedly anti-vax when the message is clear we are pro choice" and would not comment further.

"We don't need [mainstream media] to achieve our outcome," he told The Sun-Herald and The Sunday Age.

Melbourne surgeon John Cunningham, who supports vaccinations, warns it is the beginning of a new stage in Australia's anti-vaccination movement.

"We're seeing new faces on the anti-vaxxer horizon. This is just the latest power couple," he said.

The Golles are based in Casuarina, a small beachside town an hour south of the Gold Coast and an hour north of Mullumbimby. They formed their anti-vaccination group after chatting to an unnamed former chiropractor patient and conducting "well over 100 hours" of research into vaccinations.

"Those including myself who have sat dormant are being fully enabled," Mr Golle wrote in a Facebook post last week. "Called upon from within to create the future for our next generations we desire."

Their Facebook group offers four "modules" filled with letters it urges members to send to senior members of government. The modules appear to suggest that by receiving a notice which declares you do not consent to compulsory vaccines, the government must reconsider its laws on the issue.

The federal government urged states and territories to make the influenza vaccine compulsory for those entering aged care facilities after May 1.

The Facebook group has grown adjacent to a two-week-old petition urging the federal government to revoke that directive, which has been signed more than 18,000 times.

The Golles, whose material has been shared on celebrity chef Mr Evans' Instagram, have expanded this week to include anti-vaccination letters that can be sent to authorities in the United States, Canada and New Zealand.

Mr Hunt said the pandemic reinforced "the absolute importance of vaccines in protecting the population against vaccine-preventable viruses". "The government condemns anti-vaccination actions or sentiment," he said.

The National Centre for Immunisation Research and Surveillance's Kristine Macartney says "more perhaps than ever" vaccination opponents are pushing against the largest vaccine research effort of all time.

"I understand that people are bombarded with this information and it can be difficult in that context to understand how to move forward," she says.

"One of the things I always suggest is talk to someone who truly has strong and credible knowledge about vaccines - that's usually your GP or a nurse who works with immunisation."

Shirokov's concert in the Comment.Show: called Yakin a pure asshole, remembered the fight with Glushakov and quarrels over the Hulk and Witzel
Jon Flanagan: Trent is the best right-back in the world, but will end up playing in the Liverpool midfield
Kike Setien: the five-substitution Rule will hurt Barcelona
Riyad Marez: Now is the time for Manchester City to win the Champions League. We have everything for this
Havertz became The Bundesliga's all-time leading under-21 goalscorer
Crvena Zvezda became the champion of Serbia for the third time in a row
PSG will buy Icardi from Inter for 50+7 million euros. The clubs have agreed
Source https://www.theage.com.au/politics/federal/federal-ministers-flooded-with-unprecedented-level-of-anti-vaccination-mail-20200521-p54v1r.html?ref=rss&utm_medium=rss&utm_source=rss_feed

WA to move to phase three restrictions from June 6

ACT eases restrictions as it looks at ‘travel bubble’ between Tas, SA

'Adios and thank you Melbourne': Salvachua departs Victory for Spain

'I was my own biggest enemy': Football star fights to overcome drug ban

Reform at last: adultery will no longer be a crime in Taiwan

How your club is shaping up for the AFL season restart: Part two

Comedy in the age of COVID-19

US officer on murder charge over Floyd

Mum gives gift of life to son by donating her kidney

Albanese calls on government to apologise for 'illegal' robodebt scheme

Ferrari launch Aussie F1 program to find the next Ricciardo

Fans make mockery out of NRL

How to drive down your car costs

‘Most powerful words I’ve ever heard’

Justice for George Floyd Rally Takes Over Lawn in Milwaukee

Adapt or perish: How indie bookshops thrived amid Australia's shutdown

Juggling social distancing when your kids are divided between two households

The house paid for with game show prize

Trump ‘terminates’ America’s relationship with WHO

Trump to terminate US relationship with World Health Organisation over coronavirus

The weird things people do in display homes

‘Our disease’: The Rock’s powerful plea

State of emergency declared after violent protests in US

Modern living in the heart of the eastern suburbs

Why did we have to fight so hard to see the 'Palace Letters'? They weren't stashed in the Queen's bottom drawer

Protesters ‘Take a Knee’ During George Floyd Demonstration in Albuquerque

We must create more jobs, not give extra money to public servants

The secrets haunting the Wonnangatta Valley