Victoria's three A-League clubs will remain in their home state while Football Federation Australia seeks to gain exemptions for the teams to enter NSW to continue their season, after another attempt to get out failed on Tuesday night.

The mix-up has left the resumption of the league in doubt, certainly on the timetable that had been planned. 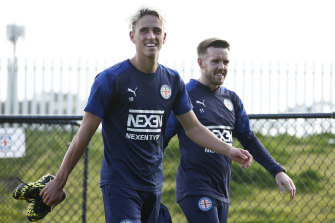 Melbourne City's Lachlan Wales and Craig Noone at training last month. City were one of three Victorian teams unable to get across the border for the second night in a row on Tuesday.Credit:Getty Images

For the second night in a row the three teams – Melbourne Victory, Western United and Melbourne City – tried to fly out of Tullamarine to reach Canberra, which would have allowed them to then move on to Sydney in time for the first scheduled game, Victory v Western United, on July 16

But they had to abort their plan once more when they discovered that the ACT health authorities would insist they spent a fortnight in quarantine – meaning they could not train or maintain fitness and making their participation in the league in the timeframe planned impossible.

While Victory look out of finals contention, City have been in the top two on the ladder all season and Western United are in with a big chance of making the playoffs.

The FFA and the A-League's managers insist that it did what was possible to get the clubs over the border, but there has been widespread criticism of the game's governing body and the league's controllers for the mess that has been created, especially compared to teams from other codes, all of whom made it out of Victoria well ahead of the border closures.

In a statement issued just before midnight Tuesday, head of the A-League Greg O'Rourke said officials did "absolutely everything we could to get the players and staff out of Victoria by midnight".

"But in such a rapidly evolving situation, unfortunately it was just not possible," he said.

"We are in discussions the NSW government, and we will continue to seek the exemptions necessary for the teams to travel.

"Given the strict league and club protocols our teams have been following since 2 June 2020, combined with the fact we have not had any players or high performance staff return a positive COVID-19 testing result, we feel that we have a very good case to gain the exemptions and get the teams to NSW to complete the Hyundai A-League season, and we will make every attempt to do so."

O'Rourke added, "The disappointment of getting prepared to travel out of Victoria to prepare for the restart not once but twice has been most frustrating for them and [I] can assure them, the clubs' members and fans that we are all committed to overcoming this evolving challenge and to play football again."

The clubs had been led to believe that a partial exemption had been granted on Tuesday and that if they based themselves in Canberra for a few days, trained and maintained fitness there, the full exemption would be granted and they could then move to the hub in NSW.

But that was before they were told by ACT officials that they would have to spend a fortnight in quarantine.

"We waited in the buses for a long time and were then told we couldn't travel, that they wanted us to spend time locked in hotels," one club member said.

"What's the point of that. We couldn't train, prepare, and then even if we were allowed to travel to Sydney we would not be ready to take part in matches for a couple of weeks as we would need to get up to fitness properly."

Another member said: "It's frustrating, it makes us and the game look stupid. Either the governments were not talking to each other, someone was not telling the truth, or someone has not done their job. Whichever, the game looks bad. All the other sports seemed to know that they had to get out of Melbourne early except for us."

NSW deputy premier John Barilaro had on Tuesday given every indication that the clubs would get the exemptions they are seeking.

"I think we have got to work with the FFA and I will be reaching out to the FFA and seeing what support they need," he told SBS.

"If we have got an opportunity to do so let's bring them [the Victorian clubs] across the border, let's park them in the regions or in the city and make sure they are part of the A-League that kicks off shortly."

At their first effort on Monday night players had met at AAMI Park at 10pm and been taken to Tullamarine, even getting kit and equipment on the flight before the pilot told them they had to get off because poor weather conditions meant they could not fly.

Haji resigned as Viitorul's coach
Karim Benzema: Ronaldo's Game made me love football
Sanchez will break his contract with Manchester United and leave for Inter for free. It will receive 7 million euros a year
Lautaro Martinez: we will Continue to do everything possible for Inter
Albert Ferrer: Barca need to become independent of Messi. Others should play more
Conte on rumors about Juve: I will sue whoever wrote this, as well as the editor-in-chief of this newspaper
Aubameyang on the failure of the FA Cup: That's how we do it
Source https://www.smh.com.au/sport/soccer/ffa-defends-second-failed-attempt-to-get-teams-out-of-victoria-20200708-p55a0n.html?ref=rss&utm_medium=rss&utm_source=rss_feed