Commissioner Rogers had his appointment extended indefinitely on Thursday despite the NSW Bushfire Inquiry and the Royal Commission into National Natural Disaster Arrangements having yet to release their findings. Mr Rogers year-long interim role was due to expire next April. 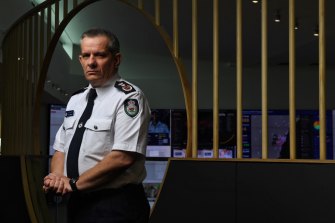 New RFS Commissioner Rob Rogers has had little time to celebrate the news as he prepares for the coming fire season. Credit:Nick Moir

Mr Rogers said he marked the announcement - relayed to him by phone on Wednesday evening - by a single celebratory drink before getting back to preparing for the coming fire season amid the added challenges of COVID-19.

Among a to-do list of nine priorities for the RFS are better protective gear and equipment for volunteers, upgrading internal communications and working with farmers on reducing fuel loads and other issues.

"It's really important to set those things out and make sure the organisation pivots itself," he said.

Mr Rogers began his RFS career as a volunteer and served nine years as deputy commissioner prior to being elevated to interim chief after Shane Fitzsimmons' retirement in April.

His consolidation in the top role comes before the NSW Bushfire Inquiry is due to finish its report by the end of July and the royal commission a month later.

Trish Doyle, Labor's spokeswoman for Emergency Services, said she had known Mr Rogers "for many years".

"While the timing of this appointment is surprising, I trust Commissioner Rogers will implement the recommendations and suggested changes for the RFS that come out of the inquiries,” she said.

Greens MP David Shoebridge said a decision on Mr Rogers' elevation to the top role should have come after "the inquires have finished", adding "we need to know how the leadership's decisions stacked up".

Phil Koperberg, who was the first RFS commissioner when it was formed in 1997, welcomed the formal appointment of Mr Rogers. He said Mr Rogers had the right characteristics for the job.

"I think it's a very good appointment ... he's very pragmatic, he's a rules man which is necessary for that job," Mr Koperberg said.

Juventus highly rates Raul Jimenez. He's like Pirlo and Partici
Juventus are seriously Interested in Atletico midfielder Thomas
Champions League format for Atletico: Simeone's team is still an underdog, but now they have the best chance
Atletico claims the goalkeeper of the national team of Serbia and Eibar Dmitrovic, compensation – 20 million euros
The FA Cup will be held without replays in the 2020/21 season, and there will be one match in the 1/2 final of the League Cup
Ronaldo's entourage denied the option of moving to Barcelona. Cristiano is happy at Juventus
Matuidi moved to Inter Miami Beckham
Source https://www.theage.com.au/national/nsw/fire-chief-lays-out-his-priorities-for-next-summer-20200716-p55ckz.html?ref=rss&utm_medium=rss&utm_source=rss_national