There will be no new fishing lockout zones along the NSW coast, as the state government scrapped a key element of its marine park strategy after it faced a substantial backlash from fishing groups.

The backflip comes just weeks after the Berejiklian government unveiled its plans for a new marine park consisting of 25 sites along the coast including parts of Sydney Harbour, inside which fishing would be banned or restricted. 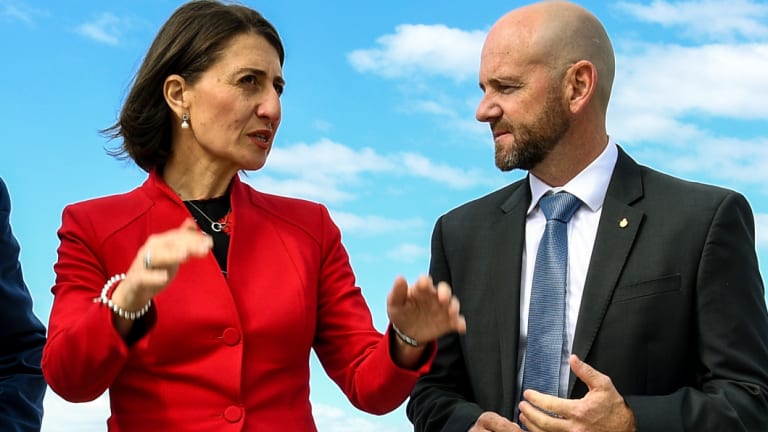 Primary Industries Minister Niall Blair confirmed on Monday the lockouts were "off the table", announcing the decision with more than a week to go before the consultation process concluded.

"One thing that is very clear to me as Minister for Fisheries is that the proposed lockout of fishers in the 25 sites is absolutely unacceptable," he said.

"While consultation will continue, I felt it was paramount to allay the uncertainty and fear the fishing industry is currently experiencing."

Premier Gladys Berejiklian also came under pressure from members of her backbench to dump the proposed lockouts, amid concerns the bans were politically unpopular, particularly in marginal coastal seats where the Shooters, Fishers and Farmers Party had been campaigning heavily on the issue.

The policy enraged recreational fishing communities, because it proposed creating new "sanctuary sites" as well as expanding existing protection site, where line fishing and spear fishing would be banned. The sites included popular Sydney fishing spots such as along the Coogee foreshore, Shark Point near Clovelly, and Henry Head at the entrance of Botany Bay.

"It's extremely disappointing to see that the minister has jumped the gun on his own consultation process and effectively has ruled out the people of NSW having a say," she said.

"This backflip increases the likelihood of MPs in marginal seats being targeted again and again by narrow vested interests in the lead-up to the State election."

Mr Blair denied the move was a backflip, and instead characterised the decision as the response of a government "listening to the community".

"This isn't a backflip. A final decision had not been made yet," Mr Blair said.

He also sought to distance the government from lockout proposal, saying the Marine Estate Management Authority had recommended the proposed sanctuary sites.

“What is now clear is that their proposed management methods and in some cases the sizes of the sites, offered up a narrow option that unfairly impacted on low risk activities, such as fishing and spear-fishing," Mr Blair said.

Barcelona is ready to let Umtiti go. Lazio, Napoli, Roma and Torino are Interested in him
Dembele returned to training on the basis of Barcelona. He hasn't played since November
Milan will buy out Kjaer for 3.5 million euros
22 thousand tests before each match – so Union wants to return a full stadium. One game will cost more than a million euros
Real asked fans not to gather in Madrid to celebrate the championship
Ronaldo will not leave Juventus. He wants to overtake Immobile and Lewandowski on goals and win trophies
Napoli will pay about 81 million euros for Osimhen. Medical check-up is scheduled for Thursday
Source https://www.theage.com.au/politics/nsw/fishing-lockouts-off-the-table-after-nsw-government-cops-widespread-backlash-20180917-p5047x.html?ref=rss&utm_medium=rss&utm_source=rss_feed

Okunbor wants back in at Belmore as Harawira-Naera considers options

Your Daily Horoscope for Wednesday, July 15

ASIC kept out of the loop on litigation funder regulation

A governor-general's life is 'certainly not dull'

The emotional impact of Lockdown 2.0

Work from home in style

Politicians caused confusion now they have to sort it out

From the Archives, 1956: The Ampol Trial

Search on to fill key role as council exec departs

‘Play by the rules’: Pubs’ virus plea to patrons

A very Canberra War of the Roses

Thousands of healthcare workers poised to help in COVID-19 fight

Doctor charged with grooming and sexual assault of girl

How to future-proof your super from the next market meltdown

US carries out the first federal execution in nearly two decades

Why are teachers again on the virus front line?

Host of streaming freebies available to help you through tough times

Man in his 30s in ICU with coronavirus

Walsh still No. 1 of draft’s ‘best ever’ top-eight

'Choco' Williams not enough to save Shiel at tribunal

The blue blood and the boilermaker's son: Kerr's relationship with the Queen's man

Most surprising of the Palace letters shines new light on Whitlam

SUPERSPREADER EVENT: One night at Sydney pub leads to 30 infections

WAG hub a possibility in Queensland

What are the Palace Letters, in a nutshell?