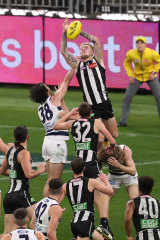 The great wall of Collingwood has claimed another victim. The Pies moved to second on the ladder on Thursday night, beating Geelong in front of more than 22,000 at Perth's Optus Stadium and restricting their opponents to fewer than 40 points for the fifth time in seven matches this season.

Back after missing a match following his indecent assault charge, Jordan De Goey was the difference, while the Cats' pain was worsened by the loss of captain Joel Selwood (hamstring) and youngster Jordan Clark (shoulder).

After an indifferent start to the season, De Goey played easily his best match of the campaign. He started brightly, making the most of a neat pass from Taylor Adams to kick the opening goal in little over a minute.

Then in the second term he outmuscled Harry Taylor to mark and kick a second, before midway through the final term, he soccered classily for a third; a bag by this year's standards.

But still there was more to come, with a sublime contested mark leading to a fourth in the dying minutes before a fifth in the final 20 seconds.

The deep Cats midfield had withstood the early loss of Mitch Duncan and Quinton Narkle seven days earlier against the Brisbane Lions, but Selwood's first-quarter hamstring tweak might have been a bridge too far. In wet conditions the inspirational skipper's crash and bash style was always going to be hard to replace, and while the Cats managed to hold their own in the clearances, they were beaten in the contested-ball stakes. 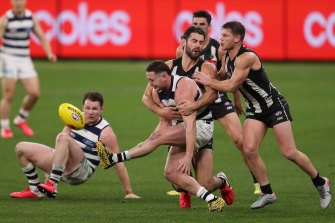 Geelong's Jack Steven manages to get boot to ball.Credit:Getty Images

With Collingwood first to the footy more often than not, the Pies managed to get the game played on their terms. They turned the tables on Geelong, successfully controlling the ball and looking to cut the field open with incisive and at times daring kicks, despite the conditions.

Brody Mihocek worked the angles beautifully to set up a first-quarter goal to Will Hoskin-Elliott, while captain Scott Pendlebury had a couple of telling possessions which led to Adams slotting a third term major. In a low-scoring game, such moments were match-winning. Collingwood also had the advantage of possessing the most dangerous forward on the ground.

Brodie Grundy issued a reality check to mature-age Cats ruckman Darcy Fort, continuing to torment Chris Scott's side just as he did in last year's qualifying final while Adam Treloar and Brayden Maynard continued their strong form. Having been recalled for a match in front of his home crowd, Clark landed awkwardly in a contest with Grundy and headed straight for the rooms.

Selwood's hamstring injury - while seemingly not overly bad - is still a concern given his age and the fact he had an interrupted pre-season because of a similar issue. 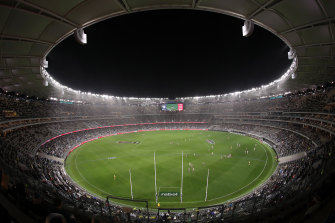 A limited number of fans are allowed into Perth's Optus Stadium.Credit:Getty Images

SHORTS STORY
It's not exactly unusual for Collingwood president Eddie McGuire to raise the issue of uniforms. And so it was after last year's finals clash between the sides when myriad fans complained about the Pies wearing white shorts and the Cats wearing navy shorts when both clubs were wearing their primary jumpers, leading to a confusing mishmash of colours. McGuire said at the time that Geelong had reneged on a two-decade long “gentlemen's agreement” to wear white shorts whenever they play Collingwood. Well McGuire would have been glad then when the Cats rocked up to what was notionally their home game on Thursday night wearing white shorts, making for a more pleasing aesthetic. 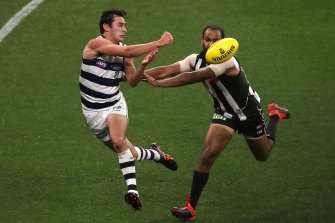 Sam Simpson fires off a handball under pressure from Travis Varcoe.Credit:Getty Images

GIRL POWER
While fans were again allowed en masse, that didn't deter Channel Seven from sticking with its fan wall which has become a feature of the network's AFL broadcasts in 2020. And if Collingwood fans looked carefully inside one of the Brady Bunch-style squares they would have found a couple of familiar faces. Cheering on the Pies were a couple of the club's AFLW players, namely Maddie Shevlin and dual best and fairest Jaimee Lambert.

Aurier agreed to move to Milan. Tottenham want 20 million euros for a defender
Can-Casillas: One of the greatest is leaving the stage. You have always been an example, my friend!
Atletico President: Simeone is great. He constantly brings victories and titles
Bayern goalkeeper Fruchtl can go on loan to Nuremberg
Liverpool can buy Norwich defender Lewis for 10 million pounds as a competitor for Robertson
The Europa League returns today. We remember where everything stopped
Christian Falk: A third-party agent is working on Sancho's transition. Manchester United can claim that they are not negotiating
Source https://www.smh.com.au/sport/afl/five-star-de-goey-sinks-cats-20200716-p55cua.html?ref=rss&utm_medium=rss&utm_source=rss_feed