Four men in their 20s have been arrested and charged following an investigation into a string of robberies across south-west and north-west Sydney. 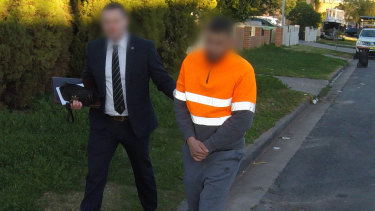 A man is arrested in Chester Hill, one of four charged following a string of robberies across Sydney over the past year.Credit:Police Media

Two men – one armed with a knife – allegedly threatened three employees at a chemist on Stockton Avenue, Moorebank, before fleeing with cash and prescription medication.

About 11.50pm on December 4, police said three men tried to break into a fast-food restaurant on Fairford Road, Padstow. An extensive search of the area was conducted, but no one was found.

The next night, two men – one armed with a knife – entered a fast-food restaurant at the intersection of Milperra Road and Henry Lawson Drive, Milperra, and allegedly stole cash as well as hitting a female employee, who did not require medical assistance.

On December 30, three men allegedly assaulted two staff members at a business on Exceller Avenue, Bankstown, and stole cash. The staff members were treated at the scene by paramedics for minor injuries.

On June 30 this year, two men – one armed with a knife – allegedly threatened two employees at a pharmacy on Shepherds Drive, Cherrybrook, before stealing cash and prescription medication.

A 24-year-old man was arrested and taken to Liverpool police station, where he was charged with two counts of armed robbery.

Police will allege in court that the man was involved in the armed robbery at the pharmacy at Cherrybrook.

He appeared at Liverpool Local Court last Thursday and was formally refused bail. He is due to reappear at the same court on September 28.

During the searches, officers seized mobile phones, prohibited drugs and a crossbow.

A 20-year-old Chester Hill man was charged with 11 offences, while a 24-year-old Georges Hall man and a 26-year-old Fairfield man were each charged with eight.

Police will allege in court that all three men were involved in several armed robberies across Sydney between July last year and June this year.

It will be further alleged that the 26-year-old man made fraudulent claims under a NSW government financial benefit scheme.

It's time to learn the names of new Borussia heroes. Now there are 17-year-old boys making goals
Paulo Fonseca: it's Important to bring Smalling back to Roma. We have only 3 Central defenders
Arteta about 2:1 with West ham: Arsenal made life difficult for themselves with losses, but they fought and believed in victory
Palace midfielder Townsend: Could have beaten Manchester United with a bigger difference. We had moments
Philippe Coutinho: I am motivated and I want to work hard to make everything work out well on the pitch
Torres on Chelsea: I Thought I could remain a top player, but I was unstable. Although there were enough successes
Neville on the broken penalty against Manchester United: an Absolute disgrace
Source https://www.theage.com.au/national/nsw/four-men-charged-over-string-of-robberies-across-sydney-20200805-p55iyp.html?ref=rss&utm_medium=rss&utm_source=rss_national