Melbourne forward Felise Kaufusi was sensationally accused of intentionally driving his elbow into the head of pint-sized Sydney Rooster Sam Walker and there were fresh concussion concerns for Luke Keary at the SCG on Saturday night.

Kaufusi charged into Walker in the 47th minute and appeared to make a second effort with his right forearm into the face of Walker.

The incident was not placed on report but commentator Greg Alexander said during the TV coverage: “Do you think he moved that elbow? OK, I will say it, I think he meant exactly what we saw – he knew exactly what he was doing.”

Fox Sports caller Andrew Voss added: “He knew where his forearm was in relation to the defender.”

Walker came from the field with his nose bloodied but passed a head injury assessment.

It was just as well because the home side were already without Keary, who failed a HIA after being collected in the head by an accidental knee from Roosters teammate Joey Manu. 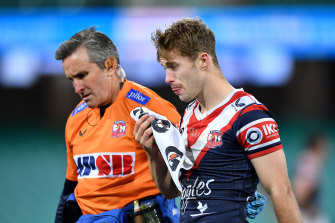 Sam Walker leaves the field for a HIA on Satruday.Credit:NRL Photos

Keary has a shocking record with head knocks – there were five in the space of 18 months in 2018 and 2019 – and he looked distressed before he came from the field.

He has done plenty of research into concussion and suffered one particular head knock during a pre-season training drill a few years ago that left him ill for a couple of months. A head knock against Newcastle also cost him his Origin debut on the eve of game one in 2019.

Kaufusi landed in hot water last year for collecting Ryan Matterson in the head with his elbow, which earned him a two-match ban. Matterson was knocked out and could not remember the incident, but Kaufusi made no apologies for the hit.

Kaufusi was one of three Storm players backing up from Wednesday’s Origin opener, including fellow Maroons Harry Grant and Cameron Munster, as they triumphed 26-18. 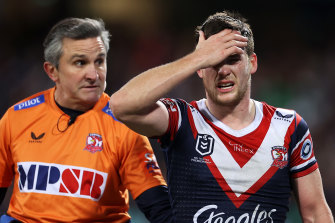 A distressed Luke Keary leaves the field on Saturday.Credit:NRL Photos

The back-rower showed slick hands to set up the Storm’s first try for debutant Grant Anderson and did well to score the final four-pointer of the night.

Anderson, who was given the nod for injured winger Xavier Coates, bagged a double, as did centre Marion Seve.

The Roosters had plenty of good moments, and none more so than Joseph Suaalii’s two successive tackles that were nothing short of inspirational midway through the first half.

Suaalii stopped Jahrome Hughes in his tracks when all the halfback had to do was keep running straight.

Seve burst down field and passed to Hughes, who decided to angle back infield before being belted by Suaalii.

The Storm spread the ball left before Suaalii raced in off his wing and ironed out Trent Loiero. He did something similar on the same patch of turf with Viliame Kikau last month.

The Roosters then marched downfield on the back of a penalty before Walker finished a chip-and-chase try for himself.

The players made sure they congratulated Suaalii as much as they did Walker afterwards.

Angus Crichton was another standout for the Roosters with some tough carries and brutal hits in defence on the left edge. He would have done his hopes of an Origin II recall no harm.

Sitili Tupouniua bagged a try and had the chance to put the Roosters in front seven minutes from full-time but dropped the ball with nobody in front of him just metres from the line. Then Kaufusi to broke their hearts at the other end.

The Roosters risk dropping out of the eight as early as next week when they face Parramatta, with premiers Penrith awaiting them after the stand-alone representative round.