In today’s AFL briefing, your daily wrap of footy news:

Come back for more updates throughout the day.

Mid-season draft pick one Jai Culley worked in a supermarket in the morning and a chicken shop at night before being selected by West Coast on Wednesday night in the AFL’s mid-season rookie draft.

The 19-year-old big-bodied midfielder said his two jobs gave him the time to improve his game after he was overlooked in last year’s draft. 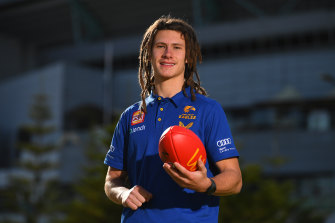 “I sort of got those jobs to play footy really,” Culley said.

“I work mornings in the supermarket and then go to the gym and go to training and then work at charcoal at night. So, I got heaps of spare time and it worked out well really.”

Culley was a standout over-age player for the Dandenong Stingrays in the NAB League this season, averaging almost 25 touches per game with the ability to push forward, mark overhead and kick goals. His standout performance was a four-goal, 22-disposal display for the Young Guns – an invitational team of mid-season draft prospects – against Vic Metro last month.

The Langwarrin product said transitioning to the midfield and working with the Stingrays’ psychologist had helped him gain “heaps more self-belief and confidence” this season.

Culley said it was “bloody nuts” that he will now fly to Adelaide on Friday to train with the Eagles ahead of their game against the Crows.

“I had a really good message from Luke Shuey, which was pretty surreal. You see them all on TV, now he’s on my phone,” Culley said.

The new Eagle said he had never been to Perth and “didn’t watch too much footy outside my own games”. He also admitted he didn’t know his new West Coast coach Adam Simpson was a North Melbourne legend.

“Obviously, I was only three or four when he was playing so I didn’t know too much. But I’ve done heaps of research on him, he’s a terrific player,” Culley said.

Culley’s parents Chris and Sally said their son had overcome two years of pandemic disruptions to get a chance at AFL level.

“[He’s] very self-motivated. He bought himself a gym, put it in the rumpus room and got to work,” his father Chris said.

“He did extra sprint sessions with Ben Benson – the Stingrays coach – over the pre-season to improve his speed. So, he knew his deficiencies and what he had to work on. His story is hard work. Nothing’s been given to him on a silver platter.”

The cavalry is returning, and belief is building at the Whitten Oval as the Western Bulldogs eye big scalps in the run home, starting with Geelong on Friday night.

After what coach Luke Beveridge conceded was an “inauspicious” start to their campaign, last year’s grand finalists are in the eight for the first time this season and on the right side of the win-loss ledger.

Momentum is building after wins over Collingwood, Gold Coast and West Coast though the clash with the Cats shapes as the biggest test of the progress they have made. Not since round three when they beat Sydney have the Dogs played a side currently in the eight.

“I said a long time ago you have to re-establish yourself,” Beveridge said on Thursday. “I feel like at the halfway mark we’re just starting to re-emerge. What that means on Friday night I hope that’s really encouraging and the proposition of playing teams ahead of us, around us and influencing where we end up at the end of the whole thing is perfect.”

In eighth on percentage and two games outside the top four, the Dogs face a tough run home with seven games against sides currently in the eight.

“Contextually, being in the mix is important for us after an inauspicious start to the year,” Beveridge said.

“It still remains to be seen who makes a play. It’s an exciting proposition to play the Cats on a Friday night, considering they’re sixth and we’re eighth. I know our guys are really looking forward to it.

“Whether it’s Melbourne or the teams just below them, there’s half a year to go. We have to make sure we maintain momentum and challenge them and hopefully a couple drop off and we play Fremantle and Melbourne, so there’s a couple of opportunities to get a scalp or two ahead.”

Hit hard by injury and illness, the Dogs should welcome back a host of key players in the second half of the season. Bailey Smith will face the Cats after overcoming the flu.

Star forward Josh Bruce is expected to make his return to competitive football in the VFL after next week’s bye but will need several games in the lower league before pressing his claims for a recall.

Beveridge said Norm Smith Medallist Jason Johannisen, sidelined since round one with a calf injury, would need to play a full game before a promotion. He played three quarters in the VFL last week so is not far off.

Forward Mitch Hannan has resumed training with the main group after battling persistent concussion symptoms and is also in contention to return after the bye, Beveridge said.