After the coronavirus pandemic triggered a year of turmoil – from set shutdowns and production delays to mass lay-offs – networks are adjusting to new viewer demands, as well as making the most of tried-and-true TV show formats, for a steadier 2021. Here's what you'll be seeing more (or less) of on your screens. 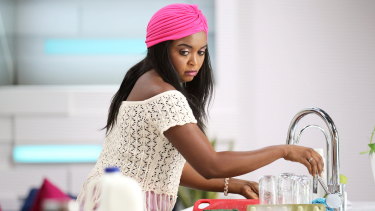 Angela Clancy was a fan favourite on this year's rebooted Big Brother. The format was picked up by Seven after stints on Nine and Ten. Credit:Nigel Wright

When Big Brother launched in Australia in 2001, it was more than a ratings hit: the series became synonymous with Network Ten itself, bolstering its image as a hip, youth-oriented broadcaster. But the days of major reality shows being inextricably linked with a particular channel are over.

Next year, Seven will air its second season of Big Brother, making it the third network after Ten and Nine to adapt the franchise. (Nine is the owner of this masthead.) Seven will also screen The Voice, which Nine declined to renew after this year's season; as well as Farmer Wants a Wife, which used to screen on Nine; and a revival of Australian Idol, formerly on Ten, in 2022.

Meanwhile, Ten will broadcast new seasons of Survivor, which previously aired on Nine and Seven, and has not ruled out the return of Dancing with the Stars, which started out on Seven.

"Reviving an old reality format can be less risky than taking a punt on something new," says Fusion Strategy media analyst, Steve Allen. "After everything that's happened this year, networks can’t afford to gamble too heavily." 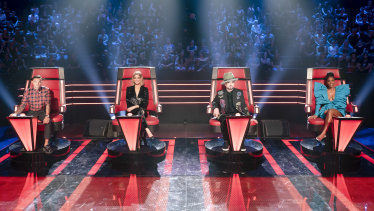 Will The Voice be a ratings hit for new network Seven?Credit:Nine Network

After winning a gold medal at the 1974 Lucerne World Rowing Championships, Colin Smith carved out a career in Australian broadcasting, helping negotiate some of our biggest TV sporting deals. And he's never seen a year quite like 2020.

On one hand, recent cost-cutting drives by TV networks – combined with delayed starts to major sporting seasons and ongoing uncertainty about crowd attendances – should drive down the value of TV deals. But the emergence of new players, including Foxtel's sports streaming service Kayo and a soon-to-launch sports channel on Stan (also owned by Nine) have complicated matters.

"COVID-19 has demonstrated that Australians still watch sport in large numbers on TV, even without the atmosphere of fans in the stadium," says Smith, now the managing director of sports advisory firm Global Media and Sports. "The halcyon days of exponential growth in sporting rights are over but I'd caution against thinking the values will drop. Whether you’re a subscription video platform or a TV network, sport is still the glue that keeps viewers watching." 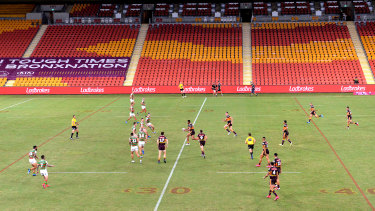 Despite no live crowds, and a short hiatus, sport remained a constant on TV during the pandemic. Credit:Getty

In 2015, Q+A frequently exceeded more than 1 million broadcast viewers nationally in its 9.35pm timeslot on Mondays. Now, it does well to top half a million – which is why ABC is moving it to 8.30pm on Thursdays next year.

"Lots of people still watch free-to-air at 7.30pm," Allen says. "If you're a fan of the big reality shows or 7.30 on ABC, you generally prefer to see that content as it goes to air. But around 9pm, a decent chunk of the audience switches over to a subscription video service like Netflix."

Not surprisingly, networks are using every possible trick to hold on to their audiences. "Instead of running an ad break after the end credits of their 7.30pm show, they'll squeeze the credits to the bottom of the screen and roll straight into the next program," Allen says.

Some are big, colourful and unashamedly silly, such as The Masked Singer on Ten and Seven's new golf contest Holey Moley. Others rely on a mix of inspirational back stories and spine-tingling performances, including Seven's Australian Idol and The Voice. Many are explicitly family-friendly: Ninja Warrior and Lego Masters on Nine, and Ten's new animal rescue series The Dog House.

What they all have in common is the feel-good factor.

"Most were commissioned before COVID-19 but the pandemic has only increased our appetite for these shows," says Moonlighting media analyst Ian Warner. "People are getting a bit sick and tired of the meanness you see in some programs. That's why MasterChef – which had the added benefit of new judges – did so well during lockdown." 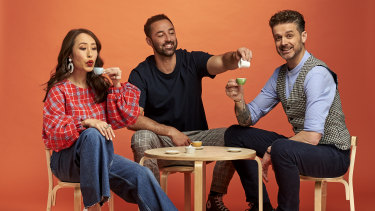 MasterChef and Junior MasterChef had two things going for them during the pandemic: new judges, and the feel-good factor.

While early seasons of Big Brother ran for three months, Seven's most recent iteration aired across six-and-half weeks, and its debut season of The Voice will be similarly truncated. Despite The Masked Singer's success in 2019, Ten resisted the temptation to stretch this year's season beyond five weeks.

"Six- to eight-week-runs are in vogue globally," Allen says. "We're seeing it not only with reality shows but dramas and scripted comedies, too. It's all about finding the balance between continuity and variety."

Karavaev on the Eredivisie: The fans are used to goals. Even if the team lost 2:3, they are happy
Mourinho on Lampard's resignation: Football is cruel, especially modern
Dzeko denied West Ham. Striker wants to leave Roma in the winter
Milan wants to sign Porto midfielder Otavio for free in the summer
Manchester United may loan Lingard to West Ham
Mourinho on the double Ntombela: He's very creative. One of those who knows how to sharpen the game
Atalanta and Sevilla have agreed on the transfer of Gomez. The midfielder will fly to Spain on Tuesday
Source https://www.theage.com.au/culture/tv-and-radio/from-shorter-seasons-to-the-feel-good-factor-the-5-tv-trends-we-ll-see-in-2021-20201127-p56ii1.html?ref=rss&utm_medium=rss&utm_source=rss_culture