By Peter Cochrane and Geraldine O'Brien

"Goodbye is of all words the saddest, the most difficult to say" - Nellie Melba.

Joan Sutherland, who was not quite five years old when Nellie Melba died in 1931, said goodbye to the world of opera last night. She took her final bow on a flower-carpeted stage, in a shower of ticker-tape and a waterfall of fireworks, to applause which threatened to rock the foundations at Bennelong Point. Never in the 17-year history of the Opera House has an audience responded with such genuine fervour. The streamers and daffodils began to rain down when her husband, Richard Bonynge appeared on stage. Bob Hawke was moved to throw one, then a second streamer.

As the curtain fell, the stamping of feet started. The theatre went dark and at 10.10 pm the curtain rose on an equally dark stage, on which Dame Joan stood resplendent in a black and glittery gown. 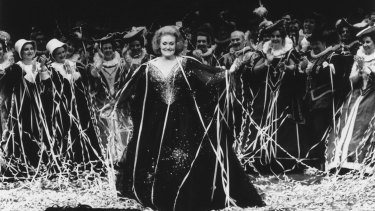 The house lights went up, and the audience rose as one. The streamers rained down again, almost tethering her to the spot, as a cheering, tearful company assembled behind her. Company member Gregory Tomlinson broke from the ranks to present a bouquet to Dame Joan, who, for once, seemed almost overcome with emotion. She then threw one of her many bouquets to Bonynge, back in the pit.

As the cheering and stomping continued she shook her head as if in disbelief.

At 10.15 pm the house lights dimmed and Dame Joan, in silence broken only by the rustling of streamers, her voice vibrant with emotion, began to sing Home Sweet Home. Green and white balloons fell from the ceiling as audience and the company on stage wept. A shower of green and gold ticker-tape deluged the company, then a huge neon sign reading, simply, "Farewell", descended to illuminate the stage. Dame Joan, laughing, finally turned again to her colleagues, her arms raised in a helpless shrug. She then beckoned Bonynge to join her from the wings. A formal kiss from him was followed by a delighted hug.

The Australian Opera's artistic director, Moffatt Oxenbould, microphone in hand, told her in a brief speech, "All of us involved in this house are in your debt". Thunderous applause.

"On behalf of all your friends and colleagues, well done and thank you." 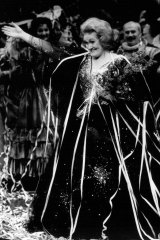 The AO's general manager, Donald McDonald, then tossed her a verbal bouquet, "Dame Joan, dear Joan, it's a fact you are one of the most admired Australians of this century." Thunderous applause again.

He then presented her with the inaugural Australian Opera trophy. "The trophies are for winners, you are one of the great and gracious winners of all time."

In a short speech typical of her modesty and generosity, Dame Joan thanked "this wonderful company which has become part of Richard's and my life. Thank you Richard for all the spadework you did through those 40-odd years.

"Thank you all very much for your wonderful generosity. I didn't realise so many listened in and watched TV or whatever. I hope I will be back in the not-too-distant future and become one of you out there."

With Bonynge holding her right hand, she stretched out her left to join hands with the company. They, however, stood back. It was her night.

As the house lights dimmed again, the theatre became incandescent with a volley of fireworks from the back of the auditorium to the front, climaxing in a shower of light from the loges which had Dame Joan laughing in delight.

Just before the opera management escorted her from the stage at 10.30 pm, she stopped for a last hug of Clifford Grant.

The company remained behind, as the audience began to sing For She's a Jolly Good Fellow. La Stupenda had taken her last bow.

Afterwards, during a $500-a-seat gala supper at the Regent Hotel, the Prime Minister proposed a toast to the "first lady" of opera. He said: "The composer of tonight's opera, Giacomo Meyerbeer, was described by Hector Berlioz as having 'had the luck to be talented, but above all, the talent to be lucky.'

"Dame Joan certainly had the luck to be talented. But she had the talent not for luck, but for hard work and single-minded application over a long career."

Performances of Les Huguenots are traditionally billed as "the night of the seven stars", but last night, inevitably, all eyes looked towards one star, the star, who has shone with a steady brilliance for almost four decades.