There were tears of disbelief after the men's 200 metres; tears of joy and a simple question: who the Hellas is Konstantinos Kenteris?

The 27-year-old, who has been setting Greek national records every time he has run here which, in the bigger picture, seemed comparable to Matt Shirvington setting Australian marks burst from many layers of obscurity to steal the race from those who thought they owned it. 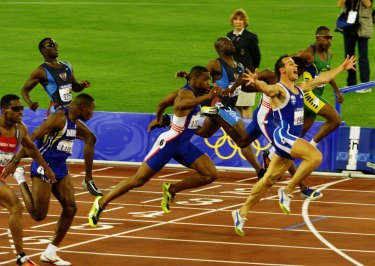 "I couldn't believe I had won it, but I didn't come here to lose." Konstantinos Kenteris wins the men's 200-metre sprint on September 28, 2000.Credit:Peter Stoop

"I said Kon the Greek would get in this race and win," he said, "and I did!" Kon the Greek will return to Athens as his country's first winner of an Olympic running event since Voula Patoulidou caused a similar boilover in the women's 100m hurdles in 1992.

The omens suggested nine weeks ago that this race was never going to go to the script. This was meant to be the glamour showdown of the games, a matchup between 200m world champion Maurice Greene and Michael Johnson, who set the present 200 world record with his scarcely believable 19.32 seconds in Atlanta four years ago.

But, having sledged each other remorselessly in the leadup to the US Olympic trials, both Greene and Johnson cried.

In their absence, last night's race was supposed to fall to perennial bridesmaid Ato Boldon, from Trinidad, or American John Capel, winner at the US trials. Or Bajan Obadele Thompson. Or someone. Anyone but Konstantinos Kenteris.

In the running, top qualifier Capel knocked himself out with a bungled start. Boldon led out from lane eight, joined on straightening by Britain's Darren Campbell, in six. In the last 40 metres, as Boldon and Campbell tied up, Kenteris surged through.

His time, 20.09seconds, was the slowest to win at the Olympics since Italy's Pietro Mennea the last non-American to win triumphed in Moscow 20 years ago.

Campbell, Boldon and Thompson were all outside their best.

In short, Kon conned them. "From the moment I stepped into this country, I realised the others didn't have anything better than me," Kenteris said through a translator. "I knew I had a chance. I'm very fortunate to have made the final, especially with seven black people.

"I thank everybody in Greece who believed I could win. I believed in myself ... I couldn't believe I had won it, but I didn't come here to lose."

Boldon's semifinal had lacked his normal spark, leaving him exposed in the outside lane for the final.

"You could write a book about people who came to the Olympics and something went wrong in the final," Boldon said.

"This was a question of who could survive physically through the rounds. At the end, Obadele and I ran out of gas." 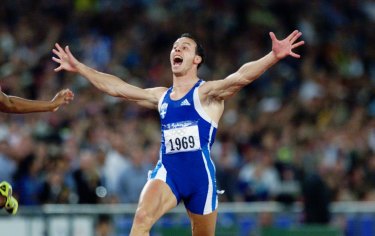 "From the moment I stepped into this country, I realised the others didn't have anything better than me."Credit:Rod Taylor

He said he wasn't unnerved by the Greek's time: "It's not a question of what time Konstantinos ran. He ran the race that was needed to win."

Boldon, third in both sprints in Atlanta, second in the 100metres here, is building a Merlene Otteylike collection of minor medals, but said: "I'm happy to leave with two things around my neck".

Kenteris dedicated his medal to the families of those who died in the Greek ferry accident this week.

A leading junior who had broken 21seconds at 19 years of age, Kenteris had struggled with injuries for several years before discovering that one of his legs was longer than the other. The problem was rectified with orthotic pads and a change of coach, to Christos Xerkos, who also coaches women's 100metres silver medallist Ekaterina Thanou.

He had gradually improved this year, setting a new Greek record of 20.25 in June.

Americans had won this race in 16 of 22 Olympics, staking a profound sense of ownership. The last time an American had not won the 200, excluding boycotts, was when Jamaican Don Quarrie took gold at Montreal in 1976.

Capel finished eighth, just behind countryman Coby Miller, who complained of a back injury and calf cramps.

There has been talk of a Greene-Johnson match race over 200. They will claim that the winner is the fastest man.

But they prove nothing unless they invite Kon.

An unfortunate statement about joining an imaginary tournament. La Liga President on Bartomeu's words about the European Premier League
Benzema scored the club's 30th goal in the Champions League. Only Messi, Ronaldo and Raul managed it
Miranchuk and Krykhovyak are the best Loko players in the match against Bayern according to Bild, CHorluka and Murilo are the worst
Salzburg coach about the Champions League: we deserved more than one point in two games
With Lukaku, it is useless to play in a power struggle. Shakhtar defender Bondar on the Inter forward
Ivanov will serve the match OF AZ-Rijeka in the Europa League. Rotor appealed his refereeing in the game with Loko
Gasperini on Ajax: it's not easy for everyone Against them. Atalanta made a great comeback
Source https://www.theage.com.au/sport/athletics/from-the-archives-2000-elite-sprinters-conned-by-kon-the-greek-20200923-p55ydd.html?ref=rss&utm_medium=rss&utm_source=rss_feed

ON EVERYONE’S LIPS: The question millions of Americans are googling

Vandyke ‘just hoping’ Gator snaps back to his best

Former Wallabies urge side to push boundaries against All Blacks

Spike in US citizens looking to move to Australia

Why buyers are wrong about this car

Don't put up the end of recession balloons just yet

'We could tell our darkest secrets to him': Bombers' tribute to Reid

Ask a Reporter: What happens if you vote, then die before election day?

No owners allowed at Flemington during Melbourne Cup week

This year's other must-see election - Myer vs Solomon Lew

Why these residents should be on alert

'Everyone had missed out': Herald photographer's global award for class of 2020 portraits

No owners allowed at Flemington during Cup week

Residents urged to get tested after COVID found in Ipswich sewage

From the Archives, 1984: Melbourne launches the Arts Centre theatre complex

Is this flag racist? One council thinks so

NSW hotel quarantine cost to hit $140 million, Premier calls on other states to pay up

ABL calls on clubs to step up to the plate