In a crisis that tested old ideas about who holds ultimate authority in politics, the state premiers and chief ministers asserted their power in the face of the pandemic, imposing extraordinary control over their communities and pushing back at Canberra’s influence. The power shift began in mid-March, when Prime Minister Scott Morrison invited them into the cabinet room where federal ministers decide the country’s direction. Morrison set up a new group, the national cabinet, to attempt a unified response to a threat that was proving too fast to stop. Gladys Berejiklian from NSW, Daniel Andrews from Victoria, Annastacia Palaszczuk from Queensland, Mark McGowan from Western Australia, Steven Marshall from South Australia and Peter Gutwein from Tasmania all had equal votes around the table. So, too, did chief ministers Andrew Barr from the ACT and Michael Gunner from the Northern Territory.

Other than on its first March 13 meeting, this cabinet room was virtual, becoming a regular teleconference to decide everything from international travel bans to the suspension of gym classes. The decisions were made by consensus and Morrison was confident, at first, in a sense of common purpose. “There are five Labor members and there are four Liberals, and we are working together as one united team,” he said.

Only later did the premiers learn how to flex their muscles. Within little more than a week, Berejiklian and Andrews had leaked a plan to impose stronger social restrictions than Morrison wanted. They took the PM by surprise on Sunday, March 22, and got their way within hours. Their control grew as the pandemic took hold. The idea of unified, national rules fell by the wayside as each premier went his or her own way. Then came border controls, the ultimate exercise in state power. Premiers experienced a surge in popularity from closing their communities, putting a priority on safety and feeding a new parochialism. Morrison was powerless to stop these decisions. When he showed support for maverick businessman Clive Palmer’s legal challenge to the West Australian border controls, McGowan went on the warpath – and Morrison backed off. 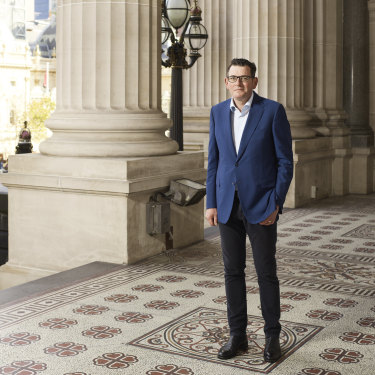 When the quarantine-related coronavirus crisis hit Victoria in mid-year, it was up to Premier Dan Andrews to decide how to reduce the torrent of cases to a trickle.Credit:Kristoffer Paulsen

This was not a cohesive group wielding shared power. Berejiklian and Palaszczuk argued over Queensland’s decision to shut the border, but there was no doubt about the message from October’s Queensland state election: strong borders work for the leaders who impose them. Andrews found himself in a crisis over failures in hotel quarantine and contact tracing, leaving an argument that will rage for years over the blame for 819 Victorian deaths, 90 per cent of the national total. Even there, though, federal power was kept in check. It was up to Andrews to decide how to bring the torrent of cases back to a trickle. 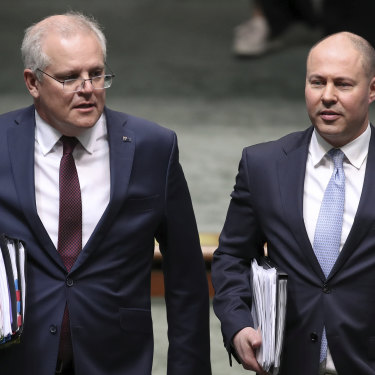 The PM began the year on the defensive. Returning from a holiday in Hawaii a few days before Christmas, just as the bushfire crisis reached a catastrophic scale after months of destruction, he was derided for being absent in an emergency. Once home, he struggled to connect with people in damaged communities like the NSW town of Cobargo, where he tried to force a young woman to shake his hand. Critics decided his career was over. He responded by throwing everything at the crisis: ships, aircraft and soldiers from the Australian Defence Force, as well as 3000 members of the ADF Reserve.

That experience showed when the pandemic hit. Scott Morrison closed the borders to international flights, offered help from the ADF, announced hurried changes to social distancing. When outbreaks spread in aged-care homes, he was held to account over the failures in a system run by the federal government. Most importantly, Morrison and his ministers authorised the biggest spending surge in living memory. He initially resisted the idea of a wage subsidy, after Labor’s Anthony Albanese backed the idea, but within weeks had unveiled JobKeeper, a payment to save 3.5 million jobs when employers lost revenue or had to shut. This payment, at a jaw-dropping cost of $103 billion, is now a brand all its own. Morrison ended the year stronger. And, no doubt, wiser.

Treasurer Josh Frydenberg launched waves of emergency spending: grants to small business, payments to pensioners, the coronavirus supplement for millions on income support, the JobKeeper wage subsidy, a $4 billion hiring credit for younger workers, tax incentives for business and faster income tax cuts for millions. The costs climbed towards $200 billion, with every wave coming with the promise another would follow.

Frydenberg, who’d begun the job in August 2018 with the promise of a gentle climb to a budget surplus, found himself on a screaming descent into staggering debt. It could not be avoided. Through it all, this wizard of WhatsApp kept in touch with everybody who mattered: business chiefs, community leaders, political allies and opponents. He negotiated with the banks to extend mortgage deferrals, for instance, when regulators had to sign off on the plans.

This economic action was essential to protect health. The premiers imposed their shutdowns and social restrictions in the knowledge Frydenberg would offer income support for those in need. Their extraordinary exercise in state power was only possible with an equally extraordinary surge in federal spending. So it was Frydenberg, the most senior Victorian in the federal government, who raged against Andrews when the premier presided over a second wave and put his state back into lockdown. Labor supporters jeered Frydenberg for this, but others cheered.

Whether loved or not, Frydenberg was at the centre of the action.

Barcelona did not pay the players for six months in December, although they took out a loan. The club promises payments in February
Messi is in Barca's bid for the Cup game with Rayo Vallecano. Dest will not play due to muscle problems
Gerrard on Lampard's resignation: Chelsea have a history in this matter, so no surprises
Golovin about the nickname Tsar: Nothing more than a joke. This is necessary for the media and fans, but I am a football player
David De Gea: I try to be a leader for Manchester United. I have the experience of winning big titles here
It feels like we've been working together for 10 years! Chelsea stars say goodbye to Lampard
Bayern Munich have signed former Basel striker Oberlen
Source https://www.smh.com.au/national/good-weekend-s-40-australians-who-mattered-politics-20201113-p56eih.html?ref=rss&utm_medium=rss&utm_source=rss_national