This unlikely quartet achieved two seemingly impossible goals this year. One, they made us feel better about life during coronavirus. And two, they did it via that most potentially soul-destroying of all social media platforms: Instagram. They sang, they danced, they discussed pet ducks and red lippie.

As Jimmy Barnes tells Good Weekend: “I’ve been inspired by the courage and the strength of the human race in the face of this horrible outbreak.” Barnesy belted out more than 140 songs with Jane and his family during the lockdown, utilising Facebook as well as Instagram and attracting an audience of half a million.

Sam Neill gave us snippets of what Clive James once called his “richly sane” life (jazz jams with Jeff Goldblum, poems in his Otago, New Zealand backyard, reflections on life with Charlie, his beloved white duck); and Arena’s “QuaranTina Arena” shows were a combination of iso-relevant reassurance, reflections on her 40-year career, and heartwarming (albeit technology-plagued) interviews. 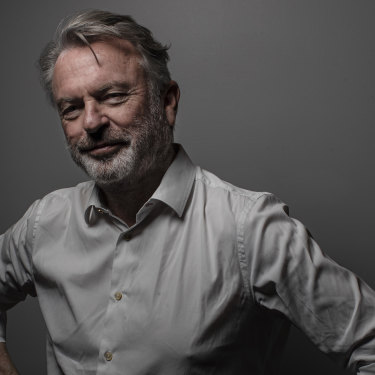 Sam Neill gave us snippets of his life in New Zealand.Credit:Lawrence Smith

“Nostalgia for pre-internet times is often used to argue against the march of technology,” says cyber psychologist Jocelyn Brewer. “But [this year], digital devices and social media platforms showed us their power to connect, share and unite. Celebrities like Arena, Barnes and Neill replaced misinformation and news-bingeing with humour, nostalgia and emotional resonance.”

And we’re still feeling the love. Barnes has recently released yet another book (Killing Time: Short Stories from the Long Road Home), is working on a cookbook and at least two new albums (one with Jane based on the lockdown shows), and his 2021 tour begins in March.

Arena, who had considered quitting music altogether pre-COVID, now has a new tour planned for May, perhaps including material written during Melbourne’s lockdowns. “I guess I wasn’t ready to disconnect,” she says. “I’ve been pretty prolific, actually.” As for Sam Neill, you can always buy a bottle of his Two Paddocks pinot online. 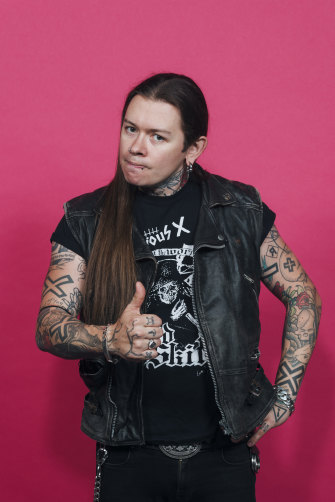 Nat has shown that his powers for low-key good and unexpected kindness extend far beyond the kitchen.Credit:James Brickwood

Nat of Nat’s What I Reckon

Nat (surname undisclosed) is tattooed from the neck down and has long, surprisingly shiny hair. His ridiculously rude, funny cooking videos have been viewed more than 100 million times, reminding us all that a) most cooking isn’t complicated, b) most cooking shows are full of pointless advice, and c) most of us are “more talented than we think”. In clips with titles like “End of Days Bolognese”, he gives us new culinary rules to live by. “Chop all the shit up and put it in a bowl,” he says. Also: “There is no f...ing zucchini in bolognese.”

Nat – who’s actually a comedian with a big back catalogue of videos about everything from boat shows to burnouts – has also shown that his powers for low-key good and unexpected kindness extend far beyond the kitchen. He’s open about his battle with mental illness. “Is it shit dealing with depression and anxiety?” he asks in one clip. “Yes it is. But what is not shit is the strength it took you to survive today. You’re a f...ing champion!”

“Nat is a genius,” says commentator Jenna Price. “He turned on the stove burners for a whole generation of those addicted to takeaway and packet sauces. No lecturing or hectoring, just jokes, imprecise measurements and sharp knife skills. Glugs, slurps and good times in the kitchen. Also, milk in bolognese! Who knew?” Nat’s also published “a book of unhelpful advice” called Un-cook Yourself: A Ratbag’s Rules for Life, and his sell-out national tour starts this December. 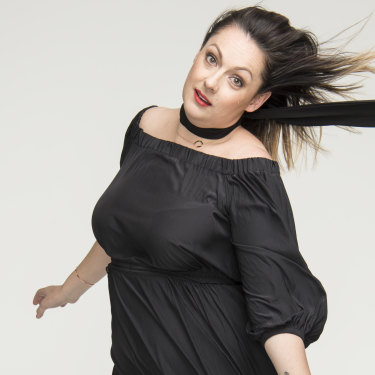 Celeste Barber is one of Australia’s Instagram darlings: 7.4 million followers, and the likes of Tom Ford and Kris Jenner among her admirers. In January, she showed exactly what this kind of power can do, raising a record $51.3 million (she’d hoped for just $30,000) for Australian bushfire victims.

Alas, she then became embroiled in a court case over the distribution of this enormous windfall. She’d hoped various charities, including the Australian Red Cross and animal welfare group WIRES could also benefit, but in May, the NSW Supreme Court ruled that only the NSW Rural Fire Service and Brigades Donation Fund – the groups she’d originally nominated – could receive the funds.

Still, Barber maintained her sense of humour. “[It] turns out that studying acting at university does not make me a lawmaker,” she said. And, as WIRES CEO Leanne Taylor puts it, “Celeste brought local and global awareness of the people, the environment and the animals that were so badly affected by these devastating fires. She deserves our congratulations and appreciation.”

Since then, Barber has supported an inquiry, and a bill in the NSW Parliament, to enable donations to be more broadly distributed. She’s also gone back to doing what she does best: fighting the good fight against online body-shaming and celebrity excess. Not quite saving lives, but certainly rescuing our social media sanity.

Barcelona will not let go in January. The goalkeeper is Interesting to Arsenal
At the beginning of the Atalanta more goals than matches in the start. We explain how he and Gasperini get used to each other
Ex - Liverpool defender Flanagan is close to a move to Poland's Jagiellonia
Rodgers on 2-0 with Southampton: Should have scored more. Leicester are 2nd in the Premier League
Real Madrid may call up Castilla's top scorer Hugo Duro due to Jovic's departure
Covid at Ruiz's. The midfielder will not play for Napoli against Juve in the Italian Super Cup
Lampard on Hudson-Odoi: Callum is in great shape and will definitely get playing time
Source https://www.smh.com.au/national/good-weekend-s-40-australians-who-mattered-social-media-20201112-p56e33.html?ref=rss&utm_medium=rss&utm_source=rss_national

Perth train fares to be capped at $4.90 under a re-elected Mark McGowan

'This is insane': Tennis players unhappy in hotel quarantine

‘Enjoy the Freedom’: Orphaned Kangaroos Return to the Wild After Release by Animal Sanctuary

Clear messaging must be part of COVID-19 vaccine strategy

Miniskirts and mujahideen: how did Afghanistan come to be defined by war?

Stage set for Herzegovina to sizzle in summer feature

Remarque may be the best Golden Slipper pointer from pivotal weekend

AFLW practice match called off after injury to Giants player

Five great things: what to do in Melbourne this week

Despite a queer treatment HMS Pinafore feels a bit straight

Fears for man missing after swim in Brisbane River

Guatemala cracks down on migrant caravan bound for United States

Inside Twitter’s decision to cut off Trump

Is breakout Gades star our next Big Show?

Cyclone Kimi expected to strengthen and pummel coast from Monday

Demons flexible on move to hubs despite having other jobs, says coach

Joe the pigeon might give us happy ending we all need

Paul Capsis and iOta blow the lid off in Rapture

Circa lives up to their reputation for the astonishing in Humans 2.0

‘What the hell was going on there?’: Flanagan slams Roosters for axing him ‘out of nowhere’

COVID crisis in Amazonas as 1000 a day die in Brazil

Most vicious beating in UFC history

Two words that have enraged Beijing

Inauguration day, US earnings and central banks set to dominate week ahead for markets

Sicilian town offers fresh chance to snap up house for €1

Australia vs India LIVE updates: Series on a knife-edge on day three at Gabba

Maureen: Harbinger of Death catches you like a fly in a web of storytelling

‘Not racist at all’: Mum’s reaction to run

'If they're having a go at you, it's because you're good'

Man dies after being found with stab wounds in Maitland

They met, isolated together and then they fell in love

Quarantine vid freaks everyone out

Becoming a better man and finding myself through hot yoga

Where to get beach homes for under $600k