Before the 2013 election, the West Australian was the Coalition's assistant treasury spokesman with responsibility for superannuation and financial services.

It was Andrew Robb, as shadow finance minister, who had been expected to deal with what Tony Abbott called the "debt and deficit disaster" of the Rudd and Gillard years. 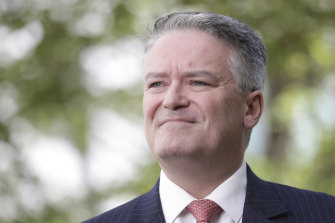 "There is a physical limit to how long you can do this job": Mathias Cormann.Credit:Alex Ellinghausen

When the first Abbott ministry was unveiled, most of the focus turned on the absence of women (Julie Bishop was the sole member of the cabinet), Bronwyn Bishop becoming the House Speaker and the move of Robb into the traditional Nationals' portfolio of trade.

Cormann was promoted into finance but the import of that move was largely drowned out by the noise surrounding the other issues.

Almost seven years on, the Belgian-born Finance Minister remains in the chair. Not one other member of the original Abbott cabinet is still in the post they took in 2013.

As the retired Christopher Pyne notes in his recent book, Cormann knows exactly where he sits in the political universe.

"Cormann understands his place in the solar system. He revels in being the hard-faced Minister for Finance who requires ministers and parliamentary secretaries to justify their spending," he wrote.

But seven years of budget discipline, of dealing with ministers wanting more cash while criss-crossing the continent to spend time with his wife Hayley and children Isabelle and Charlotte, takes a toll.

As Cormann said on Sunday: "There is a physical limit to how long you can do this job."

That has not been helped by events of the past 24 months. 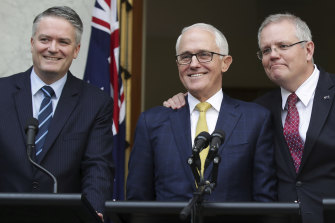 His miscalculation of the numbers behind Peter Dutton to replace Malcolm Turnbull as prime minister hurt. Turnbull's book this year, in which he said Cormann had told him Scott Morrison was "emotional, narcissistic and untrustworthy", highlighted the enduring fallout from the 2018 leadership change.

Politics is a brutal and unforgiving profession but practitioners as good as Cormann are able to put their own spin on events. However, budget numbers are indifferent to political rhetoric.

Cormann had planned this year to record the first federal budget surplus since 2007-08. As a finance minister, there's not much more important than getting the books back into the shape.

But the summer's fires and then the coronavirus pandemic destroyed that plan. Instead of a surplus of $5 billion for 2019-20, the government is likely to deliver a deficit of more than $90 billion.

For 2020-21 the situation is even more dire. The deficit, according to a growing number of experts, could pass a once unimaginable $200 billion, with debt on its way to $1 trillion.

For a finance minister looking to get back to surplus, this is like a mountain climber approaching the top of K2 only to be told they have to go back to the bottom of the Himalayas to start an assault on Everest. Without oxygen, without a tent, without a Sherpa.

Cormann leaves with several substantial successes, most prominently an overhaul of the GST that has delivered his home state an ongoing source of tax revenue in a deal (put together with Morrison when he was treasurer) that does not leave other states worse off.

The Abbott, Turnbull and Morrison governments would all have suffered more political defeats but for Cormann's negotiation skills in the Senate. The reduced rate of company tax paid by small and medium businesses, for instance, rests on Cormann's shoulders.

Senate estimates will miss a hard-nosed defender of the government's position who knew when to push back against a particular line of opposition attack – which was almost all the time.

His departure robs Morrison of a stable, considered adviser at a crucial time. The next few months, the next few years, are going to get tougher to negotiate.

Cormann, who learnt English when he moved to Western Australia in the mid-1990s, noted on occasions his accent and its similarity to Arnold Schwarzenegger's Terminator line of "I'll be back".

Liverpool are close to buying a defender for Olympiakos Tsimikas. Medical check-up-this week
Barcelona intends to sign Bernardo Silva. City can get Semeda
Real are planning to buy Dybala and are ready to include Kroos or ISCO in the deal (Sport Mediaset)
Conte about Inter before the 1/4 Europa League: we Continue to progress, we become stronger
Piontek is Interesting to Fiorentina. Herta wants just over 20 million euros
Barzagli or Grosso will replace Pirlo in Juventus U23
Daudov about Akhmat: I am Sure that the team will Interact better with each new game
Source https://www.smh.com.au/politics/federal/he-won-t-be-back-cormann-hits-his-limit-after-a-record-run-20200705-p5594z.html?ref=rss&utm_medium=rss&utm_source=rss_feed

How to hack your way to a pay rise

Aussie state that got the biggest handout

Furnished Hanseatic to stick to sprint trips in spring

Victory legend Muscat off to flying start in Belgium

Pregnant mum predicts her own death

Don’t be ashamed of those extra kilos

Shades of Waititi in this home-baked comedy

Faced with a digital divide, one country cancelled the whole school year

Spike in reckless 'selfie stunts' on Sydney trains during lockdown