There's nothing Michelle Underhill hates more than being told to "move on" with her life nearly five years after her four-year-old daughter Elle died in a head-on crash and her other daughter, Elaina, was seriously injured.

''People say you move on, but you don't. Elle's death is not a limited event. It continues for us," said Ms Underhill of Casino in NSW. 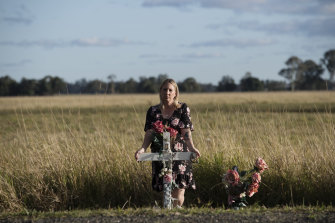 Michelle Underhill at the roadside memorial where her daughter, Elle, 4, was killed in a head-on crash near Casino in December 2015.Credit:Elise Derwin

With two-thirds of the state's 1182 fatalities in 2019 occurring on country roads, Ms Underhill said she was campaigning during Rural Road Safety Month for drivers to pay attention and stop thinking: "She'll be right".

Newly published research has found the risk of having a serious injury in a head-on crash occurs at a much lower speed than previously found. 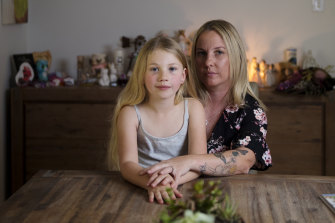 Michelle Underhill and her daughter Elaina, who was seriously injured in a head-on collision that killed her older sister Elle.Credit:Elise Derwin

Given that the speed limit on most country roads was 100km/h, Mr Doecke said in the event of a head-on crash there was a more than 90 per cent chance of serious injury.

On December 18, 2015 Ms Underhill's daughters Elle and Elaina were in the back seat of a Red Mazda 323 on the Bruxner Highway near Casino when their babysitter swerved on a slight bend into an oncoming vehicle.

The impact of the crash severed the Mazda. The other vehicle was hit head-on by the side of the Mazda. (Mr Doecke's research showed someone in a side-impact crash would have to be travelling at 90km/h to have a 50 per risk of serious injury.)

Ms Underhill and her husband, Steve, had been wrapping Christmas presents at home when they heard sirens. First one, then many. After hearing news reports that the crash involved a car like their babysitter's, they raced to a chaotic scene. When they heard someone say, "She's gone", Ms Underhill's husband screamed.

They arrived at the morgue thinking they would be identifying Elaina.

Instead they found their older daughter Elle, who had the same blue eyes and blonde hair as her little sister. Elaina had been flown to hospital with a brain injury, damage to her eye and bladder, and a large cut to her arm.

Today, Elaina is seven. She has chipped teeth and 21 visible scars. Her mum said she still has nightmares about Elle's death and the accident.

"It is just heartbreaking how much [Elaina] misses and loves her, and how she wrote she tries to be happy but she can't because Elle is dead," she said.

Ms Underhill said these crashes affected everyone. A bystander later told her he would never forget sitting with Elle as she died, watching her blue eyes fade.

Tara McCarthy, Transport for NSW's deputy secretary of the Safety, Environment and Regulation division, said head-on crashes created more force with a higher likelihood of death or serious injury than any other vehicle-to-vehicle crash type.

A new survey by the Australian Road Safety Foundation found nearly 80 per cent of city and regional drivers admit to risky driving, and were more likely to do so on country roads.

Professor Olivier, who is head of the university's department of statistics and deputy director of the Transport and Road Safety Centre, said lowering speed limits or using barriers were options.

"If action is not taken, we will continue to have fatalities and serious injuries on our roads," he said.

Barcelona will pay 18 million euros to city for their pupil Eric Garcia
Sutton on Chelsea's worst transfer: there are examples of Torres and Shevchenko, but Kepa is ahead of everyone
Acts Kolisevski: I'm lucky that Ronaldo is now my partner. He is great
Manchester United have no plans to buy a Central defender in this transfer window
Vitaly Kutuzov: Atalanta signed the best deal in Serie A by signing Miranchuk
Klopp did not like the applause on the Liverpool bench after the removal of Christensen
Barcelona and Wolverhampton can agree to transfer Semedu for 30 million euros plus bonuses
Source https://www.theage.com.au/national/nsw/heartbroken-mother-calls-on-drivers-to-drop-she-ll-be-right-attitude-20200804-p55idk.html?ref=rss&utm_medium=rss&utm_source=rss_feed