A planning decision by the City of Perth’s council to reject the relocation of an existing drop-in centre for people experiencing homelessness to a site 200 metres around the corner is going to the State Administrative Tribunal.

Councillors decided unanimously last month to knock back an application by Ruah to move the centre – which helps about 120 clients a day with legal, health and mental health and drug and alcohol services – from Shenton Street to James Street, next to the Northbridge police station. 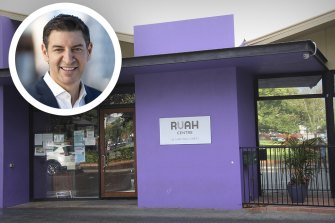 Homeless services provider Ruah has made an appeal to the State Administrative Tribunal over a planning decision by the City of Perth, led by Lord Mayor Basil Zempilas, inset, to stop them moving a drop-in centre 200 metres from its current location in Northbridge.

The drop-in centre is set to close in the next two months to make way for construction on the existing site of Ruah’s new $15 million seven-storey facility for women and children escaping family and domestic violence.

Ruah chief executive Debra Zanella has been in discussions with the local government’s chief executive Michelle Reynolds since the council decision but an alternative solution in terms of finding a new location for the drop-in centre has not been found. A directions hearing will be heard in the SAT next Friday.

The relocation of the drop-in centre appeared to be going ahead – with local government staff having the authority to make the decision – but was elevated to a council meeting by three elected members after concerns were raised by business owners, landlords and residents on James Street.

The city staff believed there was no appropriate planning reason for refusing the application given community centres are encouraged for the area under the local government’s planning framework.

This interpretation was rejected by councillors, however, who argued state regulations governing local planning allowed them to block the move as it did not address community concerns, would impact amenity and was inconsistent with the aims of the Northbridge precinct – to be a diverse inner-city precinct that was an attractive destination for tourists.

City of Perth planning and economic development general manager Dale Page has previously told the council perceptions of anti-social behaviour would be difficult to justify in terms of planning refusal.

The council’s decision and its interpretation of local and state laws and regulations will now be under scrutiny as part of the SAT appeal.

WA Homelessness Minister John Carey has been scathing of the local government’s stance and previously said he would support a SAT appeal by Ruah.

Perth Lord Mayor Basil Zempilas recently pushed for a decentralisation of homeless service providers from his local government’s boundaries to other councils.

He also says the state government is ultimately responsible for addressing homelessness and the city was already playing its role in dealing with the issue.