The Department of Health and Human Services has confirmed that two workers on the government's revamped hotel quarantine program attended work while infectious.

The department said the pair, who were among nine workers on the program to have become infected with COVID-19, were asymptomatic when they attended work.

As Victoria recorded 15 new cases of COVID-19 on Thursday, and another two lives lost to the virus, the political row over the hotels was reignited after workers on the program were sent home mid-shift and replaced by police in one of the program’s "hot hotels" on Wednesday amid infection control fears.

Premier Daniel Andrews told his daily media briefing on Thursday that Victoria Police and not private security contractors were in charge of the remaining quarantine hotels and that Wednesday’s changes at the Novotel in Southbank were part of the "transition" of the quarantine hotels as the number of travellers in isolation dwindled. 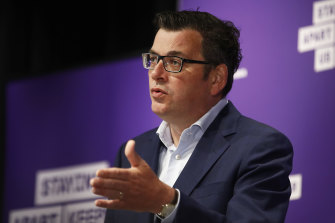 Private security guards in hotels containing people who tested positive to COVID-19 were found to have seeded Victoria's disastrous second wave of coronavirus. The program was subsequently overhauled and an inquiry was set up by the government to examine its failings.

Alfred Health has been running the quarantine program for the government since July and has hired services giant Spotless to provide workers to the Melbourne hotels where returned travellers and health workers are isolating.

The health service said in a statement on Thursday that Spotless had provided "floor monitoring" but not security workers.

“Spotless staff were not employed in security roles in hotel quarantine. As part of their induction process, Spotless staff undertake extensive [personal protective equipment] training prior to commencement of duties.”

But the state opposition dismissed the health service and the Premier's positions, with Victorian Liberal leader Michael O’Brien attacking the Premier for "failing to learn the lessons" of the ill-fated first phase of the quarantine program.

Victoria Police published a statement on Thursday saying its officers had been working at the Novotel since Monday as it received guests from another hotel, the Brady on Little Latrobe Street, which was being decommissioned as a "hot hotel".

Mr Andrews said that Victoria Police were in charge of security at the quarantine hotels and that Wednesday's changes at the Novotel were part of a planned transition of the program.

He said the return of international flights into Victoria was very unlikely until the official inquiry into the hotel quarantine program, headed by retired judge Jennifer Coate, delivered its findings in early November.

Documents tendered to the hotel quarantine inquiry by Alfred Health show duties formerly undertaken by security guards, such as accompanying guests on fresh-air breaks, supervisory roles and bag checks, were being provided by Spotless staff in the revamped hotel quarantine set-up.

A Justice Department spokeswoman told The Age on Wednesday those staff had now been removed and the only remaining Spotless staff were in cleaning roles.

Of the nine hotel quarantine staff to become infected with coronavirus, the department claimed three were exposed to known outbreaks, five had contact with known cases in their households and one was likely to have been acquired through community transmission.

The Opposition Leader said the Premier had failed to learn the lessons of previous bungles with hotel quarantine.

“To think that he has still got private security guards in hotels, still not got proper infection control, still putting the community at risk," Mr O'Brien said.

Jenny Mikakos resigned as health minister on Saturday after the Premier told the hotel quarantine inquiry that he believed she was the minister responsible for the program.

Reporting on the daily infection figures earlier in the day, Deputy Chief Health Officer Allan Cheng said the all-important rates of "mystery cases", or diagnoses with an unknown source, was halving week on week.

But Professor Cheng said the unknown-source infections were occurring far and wide throughout Melbourne and urged people to continue to get tested if they had symptoms.

“It's important to note that these mystery cases are in 14 different [local government areas] so they are very widely distributed, and they do suggest that, obviously, a mystery case has got it from someone.

“So, it just reinforces the need for people with symptoms to come in for testing.”

Hans-Dieter flick: I Hope Alaba will sign a contract with Bayern. Our club is one of the best in the world
Diego Maradona: Messi gave Barca everything, brought them to the top. He was not treated the way he deserved
Federico Chiesa: I hope to leave my mark in Juve. We will achieve great results
The Coach Of Benfica: I don't want us to look like the current Barcelona, it has nothing
Guardiola on returning to Barca: I'm happy at Manchester City. I hope to stay here
Fabinho will not play with West ham due to injury
Ronald Koeman: Maradona was the best in his time. Now the best Messi
Source https://www.smh.com.au/national/victoria/hotel-quarantine-staff-attended-work-while-infectious-20201001-p5616o.html?ref=rss&utm_medium=rss&utm_source=rss_national

‘WE’RE ON TRACK FOR THAT’: When masks can stop being mandatory

Trampoline park at the centre of a growing coronavirus cluster

US election, COVID-19 surge in Europe point to volatile week ahead for markets

A different emergency: how Ambulance Victoria failed its own

From the Archives, 1948: Controversy over first Melbourne Cup photo finish

Sean’s rise from milkman to megastar

Biggest typhoon of the year to hit Philippines, one million evacuated

Strongest typhoon of the year to hit Philippines, one million evacuated