For most people, the teenage years are for graduating high school, preparing for work, or deciding what to do with life. For Jason Windsor it was about finding a place to sleep each night.

At 17, Jason found himself homeless and living on the streets of Perth, seeking safety and shelter at abandoned homes or shops and trying to avoid being assaulted or having his belongings stolen. 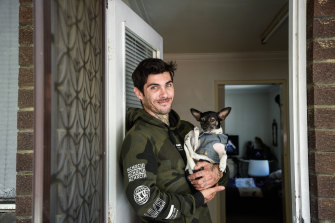 There was no stability in the teenager’s life and his shelter continually changed depending on the season, how safe he felt or whether he was moved on by police, rangers or landowners.

Finding abandoned buildings was a safe haven for Jason at times, and if could make it ‘home’ for a few weeks without being bothered, keeping to himself helped him manage his anxiety and depression.

Jason lived this way for 13 years, saying it was safer than living in shared accommodation where his stuff would be stolen or he’d be assaulted.

“There was violence and abuse, it was pretty nasty,” he said. “I decided I was better off living on the street than living with people like that.”

A tent given to him by Daydawn Advocacy Centre meant he had “four walls” to call his own and a bit of shelter for him and his dog Dee, wherever they ended up.

“A lot of people who stay on the street bunch together, but I stayed away from that because it can be treacherous. They steal from each other and get into fights, so I would just find somewhere to tuck away so I didn’t bother anyone,” he said.

“I’d stick to myself and just come out to get food or something."

Sustaining employment while on the streets was difficult, but Jason managed to work odd jobs like building electricity transformers or sheds, and landscaping. 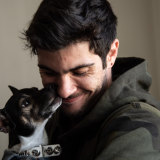 Jason Windsor is living in his own rental home in Armadale.Credit:Marta Pascual Juanola

“Not having a permanent place to live or access to basic comforts like a shower, nutritious food or electricity to charge my phone was a challenge,” he said.

Jason’s saviour was his furry companion, Dee, who was given to him a few years ago by a friend who could no longer care for her.

“Dee’s the one who's looked after me, she’s wonderful,” he said. “I don’t even know if I would be here if it wasn’t for her.”

While being given Dee was a pivotal moment in Jason’s life, he said another was the recent death of his grandmother, who he was unable to see before she died.

It was her death that led the now 30-year-old to ask for help, and by doing so his life turned around within two weeks.

After seeking help from Uniting’s Tranby engagement hub, Jason managed to get off the street and into a private rental of his own thanks to JobSeeker payments.

“I’ve wanted this for so long, for so many years,” he said. “I’d still be in the tent if it wasn’t for Uniting and the staff there.

“I’m sleeping better, and being able to put food away in the fridge and the cupboard is pretty awesome."

Shelter WA chief Michelle Mackenzie said WA needed to be prepared for a second wave of homelessness due to the impact of COVID .

“Some people are currently only able to afford their home because of the current JobKeeper or JobSeeker allowance, but as the time for these to end draws closer, we are going to see an increase of people in poverty, housing stress and homelessness, she said.

“Just as confronting is the looming end of the moratorium on evictions and mortgage relief. With this, we are predicting many Western Australians may face the prospect of becoming homeless.”

Lauren is a casual journalist at WAtoday who reports on education and general news.

Marta is an award-winning photographer and journalist with a focus on social justice issues and local government.

Klopp on 2-0 with Chelsea: Mane was rewarded for Kepa's pressure. Perfect start for Tiago
Liverpool and Everton scored 6 points after 2 rounds of the Premier League. This is the first time since 1993
Lampard on 0:2 with Liverpool: a Serious mistake by Kepa. Without red and with a penalty scored, it would have been 1-1
Mane on Kepa's mistake: Knew he would have few options when he got the ball. He made a mistake, I scored
Will bale be revived at Tottenham?
Tiago broke the Premier League record with 75 assists per half - time-more than any Chelsea player in the entire match
Kroos on captains: Ramos is the best possible option
Source https://www.smh.com.au/national/western-australia/how-a-perth-man-living-rough-for-13-years-turned-his-life-around-in-just-two-weeks-20200804-p55ikz.html?ref=rss&utm_medium=rss&utm_source=rss_national