How Hollywood projected American power around the world 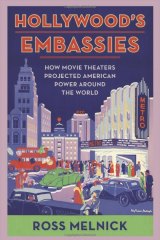 If there’s anyone who still holds the view that entertainment, art and politics are separate realms, Ross Melnick’s exhaustively researched book should set them straight. What it has to offer might not be as juicy as the tell-all tales of the stars and the behind-the-scenes accounts of film productions, but its account of how the film business works has a unique significance.

Melnick’s thesis is a straightforward one: the theatres that Hollywood built or leased around the world throughout the 20th century and beyond were metaphorical “shop windows”, marketing a way of life. This wasn’t just an incidental byproduct of the studios’ dream-factory business, Melnick argues. It was a carefully calculated business strategy that effectively transformed the theatres into “cultural embassies”.

And it allowed the US surreptitious entry into countries where an American presence might otherwise be unwelcome. “An American-owned cinema operating overseas in a major media capital such as Buenos Aires or Bombay,” Melnick writes, “meant gaining a physical [his emphasis] and not just a metaphorical foothold in a foreign nation.”

He acknowledges the Cold War rhetoric of the studios might have been unsubtle, as in Twentieth Century-Fox president Spyros Skouras’ 1953 claim that “no medium can play a greater part than the motion picture in indoctrinating people into the free way of life and instilling in them a compelling desire for freedom and hope for a brighter future.”

But the methods of indoctrination that Melnick identifies are of a kind that generally goes unnoticed, to do with “the soft power of mass culture”.

It wasn’t just films about the self-proclaimed land of the free that were being showcased in these “shop windows”. How they were being watched was providing another kind of display: the sense of occasion created by the cinema exteriors, the lavish openings attended by local dignitaries and Hollywood stars, the plush seating, the luxurious surroundings, the well-dressed ushers, the air-conditioning, the quality of the prints and the projection, etc.

As Melnick wryly observes, Hollywood’s foreign cinemas “sought to vertically integrate the mind of the global moviegoer, to watch American films in a distinctly American way and context.” 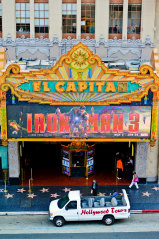 Hollywood’s Embassies is essentially a history of how the US set out to colonise the minds of audiences around the world. It examines the complicated ways in which the American movie business set out to infiltrate the global marketplace, and looks at the consequences for each of the regions the film companies targeted – and at the various means the interlopers deployed to overcome resistance, such as disguising their presence behind a local brand name in what’s apparently known as a “glocal” approach.

Having established a modus operandi during the early days of moviemaking, the studios brought a special urgency to their overseas business practices after the US Supreme Court’s 1948 Consent Decree. That antitrust decision, rescinded in 2020, forbade film production companies from owning exhibition outlets in the US and thus controlling the marketplace. But it didn’t apply outside the US, and none of the constraints it imposed impinged on the way the studios went about their foreign business.

The book begins with Hollywood’s incursion into the UK and Europe after the end of World War I. They pressed on, despite boycotts and local protests that understood that “the cinemas are the fortresses of the industry, of which the studios are merely the munitions factories”, and that saw the replacement of the British Empire theatre in London by an American Empire as profoundly symbolic.

Melnick’s account of how Paris’s Le Paramount cinema under US ownership became a centre of the Resistance movement against the Nazi occupation during World War II is a fascinating illustration of the ways in which theatres not only occupy central roles for communities, but also provide fronts for their actual agendas.

Subsequent chapters explore how US ownership of theatres in Australia and New Zealand drained the life out of the local film business in the 1930s and ’40s, and “ultimately determine(d) the direction of Australian exhibition, distribution, and production for the coming century”. And how, in the same period, the theatres of South America and Brazil in particular became a battleground for the struggle between the US and Germany’s UFA studio for the hearts and minds of local audiences.

Melnick also examines the varying degrees of success and failure that the US film business faced in its dealing with the Middle East, Africa and Asia, where its theatres “were celebrated as foreign, exotic embassies of Hollywood in moments of philo-Americanism, and then denigrated and hated as such during moments of pointed nationalism”. And at the ways in which, “on the one hand, it often challenged prejudice on the screen through films like South Pacific; on the other, it often engaged in or co–operated with discriminatory behaviour … under the cloak of respecting local traditions.”

It remains unclear whether Melnick’s history is over. Do cinemas matter any more? Is the theatrical experience of filmgoing about to become a thing of the past? Or will the almost simultaneous impact of the pandemic and streaming services eventually turn out to be nothing more than a minor glitch, like the arrival of television?

Whatever the answers to these questions, the business model that Hollywood Embassies identifies – to do with the ways in which our media entertainment is distributed and exhibited – remains crucial to any understanding of what lies ahead. To ignore this is to mistake the Hollywood way for the only way, which it most certainly is not.