Your annual superannuation statement should by now have crossed your kitchen bench.

The shrunken balance probably made you gasp. However, the chances are that since June it has recovered to somewhere near where it was before the coronavirus pandemic struck. 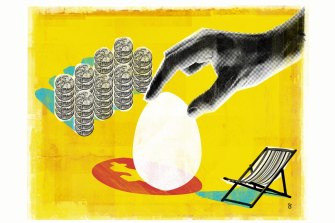 So, is your fund going to go the distance in your retirement?

I’ve crunched the numbers for how much is enough super to save at every age.

The Association of Superannuation Funds of Australia itemises the cost of a "comfortable" retirement, which includes a mix of leisure and recreational activities and the purchase of such things as household goods, a car, clothes, electronic equipment and domestic and overseas travel. It also assumes you are healthy and own your own home.

However, the bigger question is the pension pot you need to produce this enviable level of income. And it’s lower than the $1 million sometimes thrown around, if you ultimately draw down all capital and therefore gain the government pension incrementally.

Using the super calculator at moneysmart.gov.au and average super balances from the ABS (2015-16), we’ve generated the data for four different age groups.

Figures factor in the 15 per cent contributions tax and assume you want to retire at 65 with $545,000, make a 7.5 per cent annual investment return and pay 0.85 per cent in investment fees.

The point is that if your employer isn’t contributing as much as necessary on your behalf, it’s crucial that you top up to that amount with your own contributions.

Notice how the super balances are consistently smaller for women than for men, and the extra amount they need to save climbs rapidly. At 25, women need to save $13 a month additionally to men. At 35, the figure is $55. And by 45, it’s $274.

The difference comes down to a 14 per cent gender pay gap.

But both genders typically fall short of the target of $545,000 for a "comfortable" retirement.

ASFA’s conclusion? “Many people, especially those who will not receive the full benefit of the increase in the SG to 12 per cent over their entire time in the labour force, still need to contribute above compulsory contributions to their super to ensure they have adequate retirement savings.”

Real Madrid conceded 5 goals from penalties in the last 3 rounds of La Liga
Simeone Pro 1-0 with Valencia: They had the best goalkeeper. Atletico need to continue playing the same way
Salzburg scored 8 goals in the Austrian League match. Game with Lokomotiv on Tuesday
Juve have not won any of their three Serie A matches without Ronaldo
Scott Micromini: Pogba is misunderstood. This is an amazing player, his failures fanned
Andrea Pirlo: Ronaldo is an additional advantage, but Juve must play their own football without him
Inzaghi on the draw with Juve: we Could have won if Benevento had been smarter on the counterattack
Source https://www.theage.com.au/money/super-and-retirement/how-much-super-do-you-really-need-to-retire-20201023-p5683z.html?ref=rss&utm_medium=rss&utm_source=rss_feed