Premier Daniel Andrews has admitted that he does not know which government ministers and departments are responsible for Victoria's botched hotel quarantine program behind most, if not all, of the state's second wave of coronavirus.

In a combative 90-minute press conference on Thursday, Mr Andrews made clear his refusal to provide information on the quarantine hotels would continue until an inquiry is finished in November, despite the retired judge running the investigation declaring on Wednesday that there was no legal reason preventing him from answering questions. 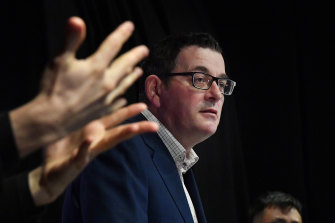 Premier Daniel Andrews refused to discuss how he and his ministers organised the quarantine hotels program on Thursday.Credit:Joe Armao

Responding to a barrage of questions about what he knew and when, the Premier - who organised the quarantine hotels program in March together with his seven most senior cabinet ministers - said he would not go into detail.

"The lines of authority and accountability and exactly what has gone on here, it is not clear," Mr Andrews said.

"I'll be accountable for mistakes that were made but I don't have the answers. That's why I've set up a proper inquiry to get those answers. We're all entitled to them."

After Victoria recorded eight deaths and 471 new cases of COVID-19 on Thursday, deputy Chief Health Officer Allen Cheng said the state would have hit 20,000 new cases per day by next week if stage three restrictions were not introduced in July. 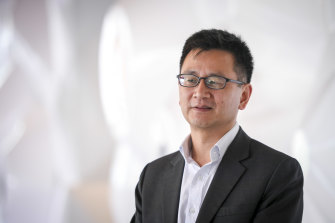 Of the 471 new cases, 81 were linked to known outbreaks and 390 were under investigation. Victoria had 575 coronavirus cases in hospital, including 42 in intensive care. As of Thursday, 810 healthcare workers and 1435 aged care residents and workers had active cases of coronavirus.

The Premier and his ministers have repeatedly deferred to the inquiry since Mr Andrews announced it would be established on June 30 because major coronavirus outbreaks linked to hotels were behind "a number of our cases through late May and early June".

"It's not a question of being legally prohibited," he said. "No one's ever asserted that ... but I cannot conduct a judicial inquiry from this podium while there is another judicial inquiry being conducted."

The Premier refused to answer questions about what conversations he had in the cabinet room with Health Minister Jenny Mikakos, Jobs Minister Martin Pakula and Police Minister Lisa Neville, whose departments were most involved with the hotel quarantine program.

The Premier again refused on Thursday to commit to releasing the genomic sequencing that showed how hotel quarantine could have triggered Victoria's second wave, sending the state into stage three and four lockdowns.

Mr Andrews said "at least a significant portion" of Victoria's cases had come from hotel quarantine but it was the Health Department's prerogative to release the genomic sequencing report, not his. 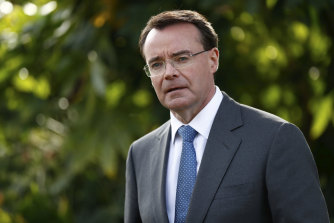 "I would need to speak with the people who do that testing and hold that data," he said.

Opposition leader Michael O'Brien said Victorians deserved clarity on who was responsible for "what will probably wind up to be the biggest public policy failure in this country's history".

"Victorians need confidence that the ministers in charge of the pandemic response are up to the job," he said.

"The Premier says the buck stops with him. Well it's not just him. It's his government ... we need to know they are up to the job and until those questions are answered, Victorians don't have confidence and won't have confidence."

Professor Cheng said on Thursday that after Victoria recorded 20 cases on June 25 and 200 cases on July 11, a continuation of that trajectory without restrictions would have resulted in 2000 cases by July 27 and 20,000 cases by August 12.

"Clearly we're not getting the 2000 cases but the numbers at the moment are certainly too high," said Professor Cheng, who added that the impact of Melbourne and Mitchell Shire's stage four restrictions would become clear in seven to 10 days.

Get our Coronavirus Update newsletter for the day's crucial developments and the numbers you need to know. Sign up to The Age's here and The Sydney Morning Herald's newsletter here.

Nacional is not happy with the appearance of the Ronaldo Academy in sporting. The Academy of the club from Madeira is also named after the Portuguese
Liverpool did not find money for Werner, and then bought Jota for almost the same amount. And there is no contradiction at all
Ole Gunnar Solskjaer: Manchester United need 4-5 games to get going
Roma were awarded a technical defeat in the match against Verona. The club wrongly stated Diawara
Italian sports Minister: we will do everything To make the stadiums open again, from October 8
Morata will receive 7.5 million euros a year in See. He took a pay cut for a move
Liverpool made a request for Dembele's loan in June. The Frenchman decided to stay at Barca
Source https://www.theage.com.au/politics/victoria/i-don-t-have-the-answers-premier-maintains-silence-on-quarantine-hotels-20200806-p55j7g.html?ref=rss&utm_medium=rss&utm_source=rss_feed

What is planned for Sydney's mysterious new mega-agency?

'They are not gung-ho': NRL concussion expert praises Roosters' care

Video goes viral and has world in tears

Foxtel subscribers back as sport kicks off

Developers battle it out over $400m Light Horse logistics site

'Battles recklessly played out in public': Why I quit the NSW Nats

There are more horses in the energy race, but are they fast enough?

From the Archives, 1967: The men who outshine their wives at housework

Your Daily Horoscope for Wednesday. September 23

Earliest footprints in Arabia show humans on a road to nowhere

Putting a lower value on older lives is unethical

Clashes as Thousands of Protesters March in Colombia

Sewage testing to catch COVID-19 outbreaks in the pipeline

Two million homes to get access to NBN fibre-to-the-home in $3.5b plan

Cash no longer king as pandemic rolls on

Going overseas? It could affect your pension payments

It pays to be energy efficient: Here's how to make some big savings

It's buyer beware when investing in 'inverse' ETFs

‘Are we playing under-6s?’: Gal blows up at NRL’s new scrum rule experiment

Budget can be used to counter fall in the fertility rate

NSW residents weeks away from open border with Queensland

Rest of the best: $12m of talent to miss final NRL round

Are NRL rule changes beginning of the end for scrums?

Frustrated Sydney university students paying $40,000 a year to sit on a laptop

Anti-Trump March in NYC as US Nears 200K COVID Deaths