Icare chairman Michael Carapiet asked NSW Treasury to query the operating budget of its own industry regulator just days before the watchdog released a damning review into the troubled workers compensation insurer.

The concerns were raised around the time he and other senior figures at icare were briefed on the contents of a damning report into the organisation commissioned by SIRA that was released in December. 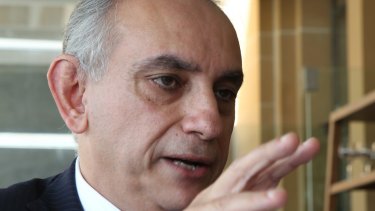 The SIRA report outlined serious issues with icare including a “poor” attitude with the regulator, concerns with its financial position, weak return-to-work rates and a claims model that had serious problems.

The email from senior Treasury official Andy Hobbs to a colleague says “you asked for some information on SIRA’s cost base, following a query raised by Michael Carapiet, to Mike [Pratt, treasury secretary]".

Two days later, on December 5, Treasury replied: “the Secretary's office has asked me to do a comparison between the costs of SIRA and [banking and commercial insurance regulator] APRA. If we do think the overall cost base appears high then we should propose some action".

The revelations follow a joint investigation by The Sydney Morning Herald and Four Corners into Australia's workers' compensation system in which SIRA chief executive Carmel Donnelly said she had “grave concerns” about icare.

SIRA warned as early as mid-2018 of icare's deteriorating financial position and solvency risks relating to the nominal insurer, which covers more than 3 million workers in NSW for hundreds of thousands of employers.

The investigation also raised concerns with the lack of transparency in how icare has awarded contracts and the conflicts of interests some of them attracted. Those allegations have not been directed toward Mr Carapiet.

Icare also launched a marketing campaign last November ahead of the release of the SIRA report to lift its reputation.

A desktop comparison between regulators was then conducted by NSW Treasury. In one exchange Mr Hobbs wrote: “SIRA's own costs do not appear obviously unreasonable. $20m of staffing costs to regulate and oversee the Workers Comp system, a multi-billion dollar industry of great importance to the State, doesn't look disproportionate on first inspection. Nor does the comparison with APRA lead to any immediate concerns.”

In April 2020, after SIRA announced it was investigating icare’s underpayment of injured workers, Treasury correspondence indicates icare again raised the issue of SIRA’s costs. “Hi chaps I haven't seen anything on the proposed SIRA cost review… Did this ever go anywhere? Icare have raised this again with our Dep Sec - and I expect will raise with Mike,” Mr Hobbs wrote to colleagues.

One insider who spoke on the condition of anonymity said: “Can you imagine a regulated entity wanting a cost review of the regulator?”

Shadow finance minister Daniel Mookhey believes the icare board must be overhauled.

"No employer or sick and injured worker can have confidence in the icare board after they failed to stop icare's collapse into scandal," he said.

Mr Carapiet's term expires next year, along with those of a number of other directors.

In a statement, icare defended Mr Carapiet's focus on SIRA's costs. "The chair of icare has a responsibility to review all major costs of the workers' compensation scheme routinely. The SIRA levy forms part of the expenses that need to be covered by annual premiums," the statement said.

Icare chief executive John Nagle resigned late on Monday night, hours after a grilling at a parliamentary inquiry where he admitted he had been sanctioned by the board in mid-2019 after it determined he had given “deficient” information about a contract his wife had been awarded by the agency.

Mr Nagle told parliament he had thought of quitting at the time as he was disappointed in the board’s reaction but Mr Carapiet had talked him into staying.

Parliament also probed him about a $360 million contract with consulting firm CapGemini and software provider Guidewire and a trip Mr Nagle had taken to Las Vegas courtesy of Guidewire which didn't appear in the annual report.

Mr Nagle’s overseas travel is approved by the board. His travel to Las Vegas was noted in a May 2018 brief to the Treasurer's office but the expectation of the Treasurer was that travel would be disclosed in the annual report. The Treasurer didn't check to see if it was.

Mr Nagle is the second person to resign from icare since the joint media investigation. Icare director Mark Lennon resigned last week, though no allegations of wrongdoing have been made against him directly. he told Labor colleagues he did not want his position to be a distraction for the opposition.

Icare said in a statement an executive search was under way to replace Mr Nagle and that Don Ferguson would step in as acting CEO.

On Tuesday, Mr Perrottet fast-tracked a scheduled review into icare but continued to defend its board and executive team.

“The success of the current scheme has been achieved by many great people, including management and board members, working very hard to deliver a workers’ compensation scheme which helps tens of thousands of people each year."

Barcelona's Interest in Isak Increased after Koeman's appointment. Larsson has a high opinion of the player (Mundo Seportivo)
Manuel Pellegrini: When you play against Real Madrid and var, it's too much
PSV and Porto are Interested in Barcelona midfielder PUC. He doesn't want to leave the club
Puyol about Barcelona: If we want to win the championship, we need to perform very well
Schalke sacked Wagner. The team has not won the Bundesliga since January
Iacini on 3:4 with Inter: Even a draw would be an unfair result, given how many chances Fiorentina created
Ramos Pro 3:2 with Betis: the Referee tried his best and didn't do anything intentionally
Source https://www.theage.com.au/business/workplace/icare-queried-its-own-regulator-s-costs-20200804-p55ih5.html?ref=rss&utm_medium=rss&utm_source=rss_business

'No regrets': Skills needed in search for recession-proof work

’Up the Milk’ returns for the Raiders

On the trail of the positive messages posted around Hawthorn

From the financial world to living off the grid

Bound for glory: how a bunch of Hawk diehards bought the Batmobile

Who wins if federal leaders can't campaign in the Queensland election?

'Great memories': Raiders back with Canberra Milk as 2021 major sponsor

The insane rent of the ‘Friends’ pads today

'A bargain... in time': McCormack says $33m airport land buy will pay off

Kiwis may be able to travel to some Australian states before Christmas: Ardern

Dire decision could smash the economy