A coronavirus-infected security guard who worked at a Melbourne hotel housing asylum seekers is employed by the same security company linked to an outbreak in Victoria's hotel quarantine system.

The Mantra Hotel in Preston, in Melbourne's north, is being used as a makeshift detention centre for about 60 men who have been medically evacuated from Nauru and Manus Island.

Home Affairs said a staff member who last worked at the Mantra on July 4 tested positive on July 8, a day after developing symptoms.

The Age and The Sydney Morning Herald have confirmed that staff member is employed by MSS Security. 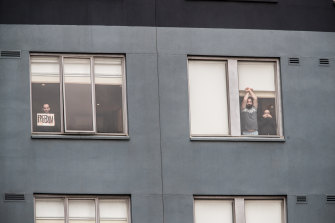 Asylum seekers detained at the Mantra Hotel in Preston in June.Credit:Jason South

The company, which has not responded to requests for comment, was responsible for guarding returned travellers at the Stamford Plaza, which has been linked to at least 43 coronavirus infections among security guards, their families and close contacts. The hotel regime is now the subject of an inquiry, starting next Monday.

At the Mantra Hotel, MSS Security is subcontracted by Serco, which runs immigration detention for the federal government.

Home Affairs on Monday said the staff member had minimal contact with detainees and other workers at the centre and was in self-isolation.

"After discussions with [the] Victorian Department of Health and Human Services, specifically their public health unit, the risk of infection to other staff and detainees is considered low," the spokesperson said.

"No other staff or detainees have shown symptoms or tested positive to COVID-19."

The spokesperson said the hotel had undergone a deep clean.

A refugee being held at the hotel, Mostafa Azimitabar, said detainees were told on Sunday evening the infected staff member was stationed in a hallway guarding an elevator.

"Everyone is panicked," he said. "Sooner or later, everyone will catch the virus." 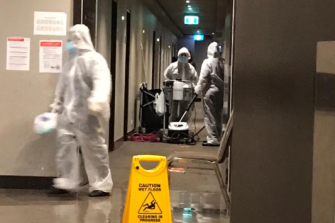 Cleaning at the Mantra hotel in Preston on Sunday.

He said authorities had no plan in place for infection control at the hotel and hand sanitiser dispensers at the facility were empty.

"The guards are bringing the coronavirus inside," Mr Azimitabar said. "We are not children, we know how to wash our hands and practise social distancing.

"The problem is that they are coming into our rooms several times a day, they bring food and they do not practice social distancing because it is impossible in this small place."

Mr Azimitabar, who has asthma, said he was worried he would be at high risk of complications if he was exposed to the virus.

"I feel that if I catch it I will die," he said, claiming their rooms had not been deep cleaned following the worker's diagnosis.

Kurdish man Farhad Bandesh, who is being detained at the Melbourne Immigration Transit Accommodation (MITA) centre in Broadmeadows, said people there were also told of the guard's diagnosis on Sunday evening.

He said detainees were told the employee had not worked at MITA for a long time.

The men at Mantra have now been offered voluntary testing, the Asylum Seeker Resource Centre said.

“When businesses or schools have had people test positive to COVID-19, wide testing, lockdown and quarantine measures are urgently put in place to prevent outbreaks spreading," the centre's campaigns director, Jana Favero, said.

“Somehow in detention centres there are different public health standards to the rest of the community."

A staff member at a hotel in Kangaroo Point, Brisbane, which also houses asylum seekers, has previously tested positive to COVID-19.

Batman MP Ged Kearney and Greens immigration spokesman Nick McKim said the men housed at Mantra should be released during the pandemic.

"We warned the Morrison government about the risk of COVID spreading in places of detention months ago. They could have moved the men into the community to minimise the risk. They did not," Ms Kearney said in a statement.

Mr McKim said it was not possible to socially distance at the hotel, and "the virus will spread like wildfire if it gets a foothold in immigration detention facilities".

Chief Health Officer Brett Sutton on Monday said he was aware of the Mantra case, but said the staff member had not worked while infectious.

"But my understanding is there's been a significant clean of that facility, and that the worker who has been identified hasn't been infectious at the workplace."

In Sydney, Serco staff from Villawood detention centre are self-isolating after visiting the Crossroads Hotel in Casula earlier this month.

Bartomeu met with Pochettino this week. He could replace Sethien at Barca
Salihamijic Pro 8:2 with Barca: Bayern are very happy, but they want more
Recently, Mueller did not want to renew his contract with Bayern. Now he's turning the football around
The baby may get angry and leave. Luis Suarez Miramontes about Messi
Joan Laporta: bartomeu's Words are a manifestation of cowardice and failure
Neuer on Ter Stegen: a Great result for Bayern, but I don't want my teammates to experience this
Messi is painful to watch. He did not help with goals and assists, in his eyes – hopelessness
Source https://www.smh.com.au/national/staff-member-at-melbourne-asylum-seeker-hotel-tests-positive-to-covid-19-20200713-p55bhk.html?ref=rss&utm_medium=rss&utm_source=rss_feed

Meeting hub to give boost to hinterland community

IN PHOTOS: Women frock up for a cause at Mayor’s Luncheon