Serena Williams was forced to withdraw from the French Open on Monday due to a pectoral injury while Rafael Nadal secured his place in the quarter-finals with a hard-fought three-set victory over Maximilian Marterer.

The 23-time Grand Slam winner Williams was supposed to face long-term rival Maria Sharapova after Nadal had claimed a 6-3, 6-2, 7-6 (7-4) win against his German opponent. However, a complication in Williams' chest area means Sharapova will walk through to the last eight.

"I unfortunately have been having some issues with my pec muscle, and (it) has unfortunately been getting worse to the point where right now I can't actually serve," said the 36-year-old, who was playing in her first Grand Slam event after giving birth to her daughter last year. 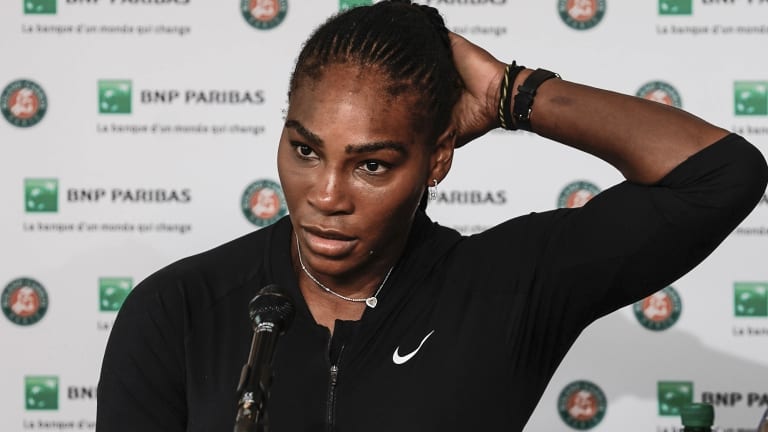 "It didn't start before I got here. The first time I felt it was against (Julia) Goerges in my last match.

"That's when I started to feel it. It was really painful and I didn't know what it was.

"I'm beyond disappointed. I put everything on the court, all for this moment. So it's really difficult to be in this situation, but I always ... try to think positive and just think of the bigger picture and hopefully the next events and the rest of the year."

Williams says she plans to have MRI scans to investigate the issue before deciding if she will return for the next major event at Wimbledon in July.

"I wish her a speedy recovery and hope she returns to the tour soon," Sharapova said in a statement.

Meanwhile, during Williams' shock announcement, Nadal was fighting to round off his match with Marterer.

The Spanish defending French Open champion, who is aiming for his 11th title at Roland Garros, was broken on serve in the first game before rallying back to win the first two sets in 80 minutes.

However, Marterer, who is ranked 69 places below the world No.1, battled on to force a tie-break, but he was ultimately out-gunned in ruthless exchanges with the 16-time major winner.

To complete the top half of the draw, Croatia's Maric Cilic will face off against Juan Martin Del Potro.

Earlier, Simona Halep advanced to the quarters after the world No.1 dispatched Belgium's Elise Mertens 6-2, 6-1.

"It was not that easy as the score shows," said Halep.

"I enjoyed the court and I think I've played my best match so far here."

It is Kasatkina's third victory over Wozniacki this year after she also eliminated the reigning Australian Open champion at events in St. Petersburg and Indian Wells.

Kasatkina, the 14th seed, will meet another Grand Slam winner, US Open champion Sloane Stephens, in the final eight.

Halep has now reached eight quarter-finals in the 10 tournaments she's played this year as the Romanian continues to chase her maiden Grand Slam title.

The 26-year-old made the French Open final last year but was beaten by Jelena Ostapenko in one of her previous three failed attempts at the last hurdle of a major.

Кад Cadiz returned to La Liga after 14 years
Pioli about 2:2 with Napoli: One point is a good result
Gattuso on Milan's penalty: the Rule needs to change. Jumping with your hands behind your back is another sport
Milan will offer 25 million euros for Celtic defender Ayer
Klopp on plans: Four years at Liverpool. After that, I want to do nothing for a year
Rogers Pro 1:4 with Bournemouth: Leicester play well only 45 minutes after the break
Inter and Roma are Interested in Garay
Source https://www.canberratimes.com.au/sport/tennis/injured-serena-withdraws-from-french-open-nadal-books-last-eight-spot-20180605-p4zjgs.html?utm_medium=rss&utm_source=rss_feed

From the Archives, 1995: Flagging reconciliation

ADF members in self-isolation at base after attending Sydney pub