David Noble remains a man under siege amid questions whether he is the right man to continue leading North Melbourne. On Saturday the Kangaroos fell to a 10th-straight defeat, on the end of a 62-point thumping by the Gold Coast Suns in Darwin.

On a hot and humid Saturday, the Kangaroos enjoyed a 17-point lead at quarter-time but were held scoreless in the second term while conceding 7.7 to trail by 32 points at the main break, the contest all but over.

They conceded a staggering 28 inside 50s in the second term, Noble’s frustration on show when No.1 draft pick Jason Horne-Francis and the emerging Tarryn Thomas began the third term on the bench. Horne-Francis’ efforts to end the second stanza were not up to AFL standard. 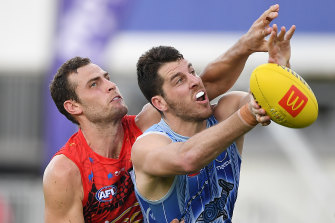 “You have to question what they are asking of these players. What is the coaching of this group? It’s a constant discussion. Is David Noble the man or not? All we can judge is what we see of the weekend and what we see today is well short of that.”

Eight of the 10 straight defeats have been by at least 50 points. Noble has only five wins and a draw since accepting the top role ahead of season 2022 but, amid the departure of three key recruiters last month, was backed by the board and club chief executive Ben Amarfio.

“He (Noble) said at the start of the year - judge us against like types. This (Suns) is a like type … when you make those close-ended statements, you have to deliver. There is no other option,” King said. He later questioned how many heavy defeats a team should have in a rebuild.

King has previously denied he has been pushing for Adam Simpson, his former teammate and current West Coast Eagles coach, to return to Arden Street.

Horne-Francis, who has yet to sign a contract extension, showed great athleticism when he goaled upon returning to the field in the third term but his day finished early with what appeared to be a toe issue.

The Suns had taken their streak of unanswered goals to nine before Nick Larkey responded. The Kangaroos booted three goals in the third term and showed greater fight but ultimately allowed the Suns to post a club record 81 inside 50s.

The Suns, the No.1 pressure team across the league, were led by the run and toughness of skipper Touk Miller, veteran David Swallow, young bull Matt Rowell and the dash of Lachie Weller in securing their sixth win. However, Weller was hurt late when seeking to evade an opponent, with immediate fears he had seriously injured a knee. 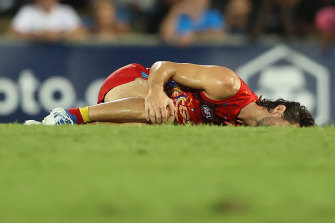 Lachie Weller on the turf in distress.Credit:Getty Images

Stuart Dew’s team head into their bye as a firm finals aspirant, hoping to be alive come September for the first time.

Kangaroos defender Ben McKay, who had curbed Mabior Chol, was subbed off after a heavy knock and may miss next Sunday’s clash against Greater Western Sydney.

Izak Rankine has been a score-involvement king in recent weeks, and that was again on show in the second term when his spearing pass across his body found Brandon Ellis for a set shot. He followed this up with a goal of his own when he sliced through a running shot from the pocket.

North Melbourne midfielder Hugh Greenwood faced his former club for the first time since his controversial departure in November, just days after he had played down suggestions he was leaving. It hasn’t been the best of seasons for Greenwood, but he was a bull in the first term with eight touches, including a hand in Simpkin’s late goal which handed the Kangaroos a 17-point lead at the first change.