Senior Liberals are concerned that Gladys Berejiklian will continue to make missteps if she does not take a break, following a disastrous week for the Premier.

Several government colleagues have privately urged Ms Berejiklian to consider taking time off and believe the culmination of natural disasters, the pandemic and a personal scandal left her vulnerable to making several "unforced errors," which played out this week. 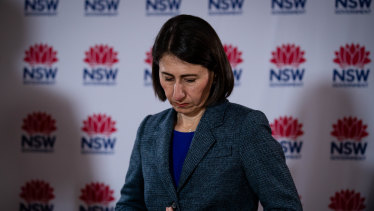 Colleagues have urged Premier Gladys Berejiklian to take a break after a bruising week.Credit:Janie Barrett

Ms Berejiklian confirmed she breached COVID-19 guidelines by not self-isolating on budget day, before delivering an extraordinary admission on Thursday that her government engages in pork barrelling.

One government minister, speaking on the condition of anonymity, described Ms Berejiklian as exhausted and said she needed to take time away from the office before making more mistakes.

"It's called being human...They were either unforced errors or unfortunate statements as a result of the absolute dedication that she gives to this job," they said of Ms Berejiklian's tumultuous week.

"I think it's in everyone's interest, particularly because most people want her to continue doing the job, that she take a break."

Another MP said the way the government had structured its response to the COVID-19 pandemic had placed an extraordinary amount of pressure on Ms Berejiklian and a select few ministers.

"If you're on a low ebb and things hit you, you lose your balance," they said.

Ms Berejiklian surprised colleagues on Thursday when she said the government's use of a controversial $250 million council grants program may have shored up Coalition votes, adding that pork barrelling was not illegal.

Among the emails was correspondence from mid-2018 between a NSW bureaucrat and a senior policy adviser to the Premier, revealing a funding announcement had been made for the MidCoast Council before the government had approved the final guidelines.

"...because the funding guidelines are an attachment to every funding agreement, we cannot issue any of them to councils (even Mid-Coast which has already been announced) until we get the final guidelines approved, hopefully by Monday afternoon," the email said.

Greens MP David Shoebridge said the emails were proof that the Stronger Community grants scheme was a "sham".

"If it was the Coalition's own money then they could do what they liked, but this was all done with public money and that's just offensive," Mr Shoebridge said.

A spokeswoman for Ms Berejiklian said that all funding allocations followed established guidelines.

"There are appropriate departmental records with respect to the approval of each grant, and the guidelines in respect of each grant," the spokeswoman said.

Senior NSW Minister Andrew Constance said the community would see through what he believed to be an "obvious attack" on the Premier.

"Every government in history has been accused of pork barrelling, the observation I would make I think the government overall has governed incredibly well for everyone in this state."

Just weeks after her own appearance before the Independent Commission Against Corruption, Ms Berejiklian's government on Friday voted down an amendment to the state's budget bill to provide the watchdog with an extra $7.3 million.

"Given the Premier's admission that taxpayer funds are commonly used for political purposes in her government and to 'curry favour', it's critical ICAC has the resources it needs to investigate corruption."

Vladimir Gazzaev held the first training session with Siena
Alessandro Costacurta: Inter are the favourites for both the Milan derby and the Scudetto
The Valencia player tested positive for antigens. Yesterday was a match with Atletico
Tottenham topped the rating of the most eco-friendly clubs in the Premier League. Manchester United, Arsenal, Brighton and Man City-in the top 5, Liverpool-7th
Manchester United and Liverpool put on a show in the cup. The sponsor of the entertainment is the bold positions of Trent and Rashford (United have better realized this advantage)
Roman Abramovich: Lampard's status at Chelsea remains unshakeable. He is an iconic figure for the club
Chelsea have sacked Lampard
Source https://www.theage.com.au/national/nsw/it-s-called-being-human-exhausted-berejiklian-urged-to-take-break-after-a-week-of-unforced-errors-20201127-p56inl.html?ref=rss&utm_medium=rss&utm_source=rss_feed