Researchers have detected an alarming rise in tongue cancers among young Australian women who have none of the known risk factors for the potentially deadly condition.

Tongue cancers have increased 385 per cent over 32 years in women aged from their teens to 44, found an analysis of 11,682 patients with the disease in Australia and Singapore. 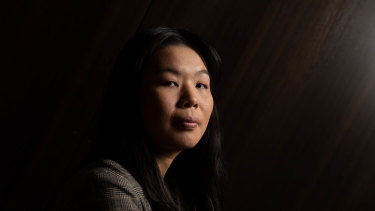 These cancers are traditionally found in older men with a history of heavy tobacco smoking and drinking.

But the rate of tongue cancer was rising by roughly 4.5 per cent every year in young women, very few of whom smoke, or they have not been exposed to alcohol and smoking long enough for the cancers to have developed from these risk factors.

Nor were their tongue cancers - on the side of the tongue - linked to the human papillomavirus (HPV).

The study’s co-author and head and neck surgeon at Chris O'Brien Lifehouse Associate Professor Carsten Palme said it was a disturbing and perplexing trend.

“It is a small group of women but also a significant group who often fall through the cracks because they don’t promptly recognise the disease,” Associate Professor Palme said.

“We need to work out what’s causing it. If there’s a common link or defect then maybe we can screen for it [and develop a targeted treatment]."

Janine Chung was 18 when she was diagnosed with Stage 3 tongue cancer in 2015. She had put up with an ulcer on the side of her tongue for months as she worked through her HSC.

When she did see her doctor and had a biopsy she was shocked to learn it was cancerous, "but in the back of my mind I knew for something to have been there for so long it wouldn’t be minor”, Ms Chung said.

She had "a 20-cent coin-sized chunk" of her tongue cut out and lymph nodes removed from her neck.

“It taught me that just because you’re young, don’t be naive. If you have any health concerns get it checked out straight away,” the 23-year-old said.

Tongue cancers are relatively uncommon in Australia. By the end of 2020, 5168 people are expected to be diagnosed with head and neck cancer, of which tongue cancer accounts for roughly one-third of cases.

If the cancer is detected early and expertly treated at a specialised head and neck cancer centre, the five-year survival rate is above 70 per cent, but survival drops below 50 per cent if the cancer is in its more advanced stages.

“The numbers aren’t too high now but they could become significantly higher over the next decade,” Professor Palme said.

Professor Dorothy Keefe, the chief executive of Cancer Australia, said the findings suggested that yet again we think we have a firm grasp of the risk factors for cancers “and then they change”.

“It happened with lung cancer where for decades most were caused by smoking, but now we’re seeing an increasing number in non-smoking women,” Professor Keefe said,

“I think this is a similar story. There is another risk factor coming into play that we don’t know about yet. In lung cancer it was genetic changes that caused it,” she said.

Professor Palme, in collaboration with a research team from Chris O’Brien Lifehouse the University of Sydney, Royal Prince Alfred Hospital and the Garvan Institute, has sequenced the whole genomes of 20 young female tongue cancer patients, and so far 70 per cent have mutations called ‘whole-genome duplication’, which occurs when cells receive four copies of every chromosome instead of two.

The researchers have also found an association with a mutation in the TP53 gene (a tumour suppressor gene). Mutations in this gene cause uncontrolled cellular growth.

More research is needed to prove any genetic link and, hopefully, find a targeted treatment.

In the meantime Professor Palme urged anyone with persistent ulcers in their mouths to seek medical attention and if necessary get treatment from a highly specialised head and neck surgeon.

Genetic cause or not, Professor Keefe warned smoking and alcohol were still major risk factors for many cancers, and encourage people to minimise both.

Pickford hired bodyguards because of fan threats after van Dijk's injury
Studying Borussia Favre: she loves to own the ball, a key player in the attack-17-year-old Giovanni Reina
An unfortunate statement about joining an imaginary tournament. La Liga President on Bartomeu's words about the European Premier League
Benzema scored the club's 30th goal in the Champions League. Only Messi, Ronaldo and Raul managed it
Miranchuk and Krykhovyak are the best Loko players in the match against Bayern according to Bild, CHorluka and Murilo are the worst
Salzburg coach about the Champions League: we deserved more than one point in two games
With Lukaku, it is useless to play in a power struggle. Shakhtar defender Bondar on the Inter forward
Source https://www.theage.com.au/national/janine-had-a-lump-on-her-tongue-for-months-before-she-found-out-it-was-cancer-20200925-p55z7i.html?ref=rss&utm_medium=rss&utm_source=rss_feed

ON EVERYONE’S LIPS: The question millions of Americans are googling

Vandyke ‘just hoping’ Gator snaps back to his best

Former Wallabies urge side to push boundaries against All Blacks

Spike in US citizens looking to move to Australia

Why buyers are wrong about this car

Don't put up the end of recession balloons just yet

'We could tell our darkest secrets to him': Bombers' tribute to Reid

Ask a Reporter: What happens if you vote, then die before election day?

No owners allowed at Flemington during Melbourne Cup week

This year's other must-see election - Myer vs Solomon Lew

Why these residents should be on alert

'Everyone had missed out': Herald photographer's global award for class of 2020 portraits

No owners allowed at Flemington during Cup week

Residents urged to get tested after COVID found in Ipswich sewage