Washington: Letters sent in recent days to the White House and to local law enforcement agencies in Texas contained the lethal substance ricin, and investigators are trying to determine whether other envelopes with the toxin were sent through the postal system, a law enforcement official briefed on the matter said Saturday.

Investigators believe the letters were sent from Canada and have identified a woman as a suspect, the official said. 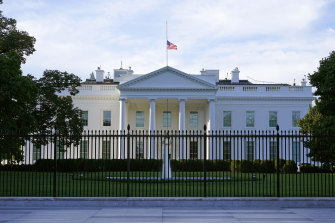 Federal officials have intercepted an envelope addressed to the White House that contained the poison ricin, according to a law enforcement official.Credit:AP

The letter to the White House, which was addressed to President Donald Trump, was intercepted, as were the letters to a detention facility and a sheriff's office in Texas.

The envelope to the White House was caught at the final off-site processing facility where mail is screened before being sent to the White House mailroom, according to a second law enforcement official. The Postal Service irradiates mail that is addressed to the White House and other federal agencies in the Washington area, and the mail is sorted in a facility that samples the air for suspicious substances.

The Joint Terrorism Task Force in Washington is leading the investigation, with assistance from New York, according to multiple law enforcement officials. So far, investigators have found no links between the ricin letters and any international terrorist groups, but the investigation is in its early stages, and nothing has yet been ruled out, one senior official said.

Ricin, which is part of the waste produced when castor oil is made, has no known antidote.

"The FBI and our US Secret Service and US Postal Inspection Service partners are investigating a suspicious letter received at a US government mail facility," the FBI said in a statement. "At this time, there is no known threat to public safety."

Officials declined to discuss what evidence they had that pointed them to the suspect. Gathering evidence will be a painstaking process. As part of the investigation, for example, agents may need to identify the sorting facility that handled the letters, identify public mailboxes assigned to that sorting facility and see if there is video of the suspect posting the letters in the hours before they were collected by postal workers.

This is not the first time that US officials have been targeted in ricin attacks.

In 2018, William Clyde Allen, a Navy veteran, was charged in a seven-count federal indictment for trying to send envelopes with ricin to Defence Secretary Jim Mattis; the chief of naval operations, Admiral John M. Richardson; the FBI director, Christopher A. Wray; the CIA director, Gina Haspel; and secretary of the Air Force, Heather Wilson.

Officials determined that Allen had sent castor beans rather than ricin. His case is still pending.

In 2013, a Mississippi man sent letters containing ricin to President Barack Obama and a Republican senator in an attempt to frame a rival. The letters were intercepted at sorting facilities.

A year later, Shannon Richardson, an actress, was sentenced to 18 years in federal prison for mailing letters laced with ricin in May 2013 to multiple people, including Obama and Michael Bloomberg, the mayor of New York at the time.

Sharonov joined the coaching staff of Cyprus Paphos
Yuran headed Khabarovsk SKA
Brugge forward Dennis on goal for Zenit: I said that I only score grandees, but it was a joke
PSG defender Kimpembe Pro 1:2 with Manchester United: We can only blame ourselves
Lopetegui Pro 0:0 with Chelsea: Sevilla showed a good team game
Rashford on victory over PSG: Manchester United now have a strong position in the group
Nagelsmann victory over Istanbul: Not fully satisfied with the game Leipzig was fatigue, not the most effective pressure
Source https://www.smh.com.au/world/north-america/letters-containing-ricin-poison-sent-to-white-house-20200920-p55xcx.html?ref=rss&utm_medium=rss&utm_source=rss_feed