While hundreds of cars queued for coronavirus testing outside the Crossroads Hotel in south-west Sydney on Monday, the nearby Casula shopping mall was much quieter than usual.

"It's like a ghost town now," Chillie Nguyen, who is manager of Casula Eyeware. "Just suddenly on Saturday, it got quiet all of a sudden." 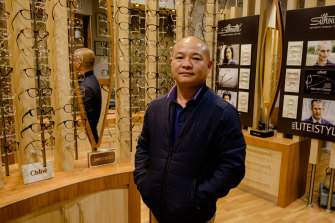 Chillie Nguyen, manager of Casula Eyewear in Casula Mall, says foot traffic and business have been affected by the new coronavirus cluster.Credit:James Brickwood

Hundreds in the area have been tested for COVID-19 and 21 people have been linked to a coronavirus cluster at the Crossroads Hotel since it was first confirmed by NSW Health on Friday.

"Once the news was out, we noticed the centre was slow. I think people are nervous in that sense: I had people who had booked an appointment on Saturday ring up and say they weren't coming," Mr Nguyen said.

"Foot traffic was not the same. We are a bit concerned; if we have to lock down again, many small businesses won't recover. It's not only myself but all the tenants around here."

Another Casula Mall shopkeeper said his business suffered a 20 per cent drop over the weekend, as hundreds in the area either got tested for COVID-19 or entered self-isolation after visiting the Crossroads Hotel between July 3 and 10.

Queues for the COVID-19 testing clinic in the Crossroads car park stretched over a kilometre around the block on Monday, prompting NSW Health to extend its hours and open a new pop-up clinic at the Picton Imperial Hotel, which is also linked to the cluster.

Moey Kerrigan, who went to the Crossroads Hotel last Tuesday, lined up for more than four hours. He and three friends, who were getting tested because they had been in close proximity, said the line "was much longer than expected". 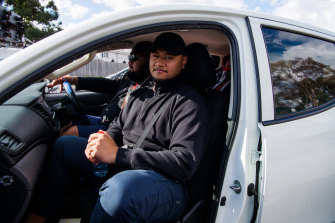 Moey Kerrigan and three of his friends waited more than four hours for a test at the Crossroads Hotel on Monday.Credit:James Brickwood

NSW Labor leader Jodi McKay said she had seen a number of cars leave the hours-long queue as people had work commitments, ran out of petrol, or didn't allow enough time because they thought it would be a quicker process.

She called on the government to ensure it was communicating with south-west Sydney's multicultural community in many languages and through community faith leaders. "We have one go at stopping the spread," she said.

Casula resident Ano Sei, from the Samoan community, said the priest of his Catholic Parish had been limiting numbers and sending a strong message about social distancing during the pandemic. 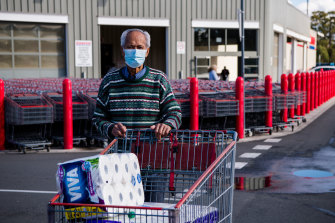 Casula resident Ano Sei said he would be staying home and remaining vigilant as the local coronavirus cluster grew on Monday.Credit:James Brickwood

"We are grateful to have leaders like that, it is a positive thing," he said. "The [Crossroads Hotel] is a popular spot for the weekend but the message in my community is to stay away from public places."

Mr Sei said he was concerned that people who went to the pub might have been moving within the local community over the past week without realising they had the disease.

He and his wife are wearing face masks as a precaution and keeping their distance from other people.

"We are worried," he said. "Me and the family have made a commitment that we need to play our part. We have not been to the pub. But we were talking on the weekend, and I think once the rush is over we have to be tested, just to have peace of mind."

Nuno about 0:1 with Sevilla: Disappointment. Wolverhampton conceded too often in the final minutes
Immobile about Newcastle: They called my agent when the sheikhs bought the club
Liverpool are confident they will sign Tiago. The player has already agreed a contract and is pressing Bayern
Our judging = fear and helplessness. Instead of Kaloshin and Kashshai – a soulless system that does not care
Lothar Matteus: Messi is not enough to pass such a Bayern. I am not afraid of Barca
Thomas Tuchel: Mbappe will play Atalanta if nothing happens
Lille acquired 20-year-old forward David from Gent. He is the best sniper of the CONCACAF Cup
Source https://www.theage.com.au/national/nsw/like-a-ghost-town-foot-traffic-down-as-cars-queue-for-hours-in-casula-20200713-p55bmv.html?ref=rss&utm_medium=rss&utm_source=rss_national