Live music is back in Melbourne but at Collingwood institution, The Tote, it's not quite as we know it.

Premier Daniel Andrews on Sunday confirmed that gigs could return to the city for the first time since March when the music stopped for the first lockdown.

The Tote is getting ready to host live music again on Saturday afternoon in the beer garden, as long as it doesn't rain. Instead of crowds on sticky carpet, owner Jon Perring will seat fans on cheap tables and chairs to abide by strict COVID-19 restrictions.

“I’ve been madly buying the cheapest furniture in town. So it won’t be fine dining,” Mr Perring said, ahead of garage punk band Thee Cha Cha Chas welcoming back The Tote. 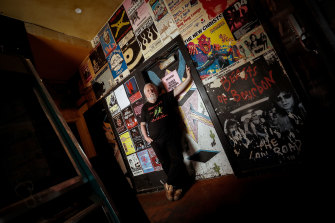 Jon Perring, owner of The Tote in Collingwood, is getting ready to welcome back live music.Credit:Darrian Traynor

“It'll be ticketed and it'll be seated, which is going to be very weird ... I'll feel better once they're actually playing. It's just such a scramble. It has been crazy really.”

Logistically, Mr Perring is having to run the the band room and beer garden as two separate venues with their own entrances.

The Saturday gigs have been named "the shoutout" because line-up announcements will depend on the weather. The seating layout will depend on booking sizes, whether they are couples or groups.

“It’s complicated but we’re up to the challenge, put it that way,” he said.

In the band room, established acts will have the option of playing two seated, 50-capacity shows a night instead of previously cramming 280 people in for a single gig. 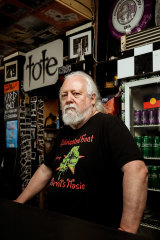 The Tote will have its first gig in eight months in the beer garden on Saturday afternoon.Credit:Darrian Traynor

“If they're more of your weekend warrior-style bands, bands who just want to play to the mates sort of thing, they can still do shows but they'll suffer on the revenue side," Mr Perring said.

"That's part of the reason we've got the shoutout shows, so your neighbourhood punk band has got a context in which they can play ... They've still got a way to engage with their audience."

Shows in the beer garden are designed to “just get the vibe going” at the legendary rock venue.

“We need [punters] to come back, of course, if we’re going to survive. We’ve got to get people re-engaged.”

Further down Johnston Street, the Night Cat in Fitzroy is preparing to host live music on Friday for the first time since March 16.

“It's super exciting,” owner Justin Stanford said. “Everyone, the whole building's bursting with excitement. We've got a big team meeting today and we're working out all the final details for the weekend.”

Those details are complex, in what will be the first seated show at the Night Cat with about 100 guests at a time.

“It's going to look like a seated show with white tablecloth and candles, like a classy joint,” Mr Stanford said.

On Saturday, the venue will host a mini-festival with five three-hour sessions and just 30 minutes between them to turnover customers and sanitise the room.

The Night Cat, which reopened about three weeks ago, is also serving drinks in a car park turned outdoor cantina as part of Victoria's outdoor dining experiment to get hospitality through the pandemic.

Without live music, the venue has been competing in a completely different market and now needs to change its model again for the seated shows.

“All of the salsa bands that we present every Sunday, it really doesn't suit a seated model, that music's for dancing.”

Fans need to wear a face mask unless they are eating or drinking at a live music venue, which can seat a maximum of 150 people indoors depending on the size of the room.

Under previous restrictions, live music has been banned or allowed only outdoors as part of the dining experience at restaurants.

Andrea Pirlo: In my 1st season at Juve, we were behind Milan, but we took the title. Everything depends on us
The judge made two mistakes. De Gea was pushed and there was no foul on our cancelled-out goal. Solskjaer on the loss to Sheffield
Maguire on the defeat to Sheffield Wednesday: We gave the opponent two goals, we didn't play at the level we expected
Wilder on registration in the Premier League: I don't want to talk about the beginning of an incredible rescue. We just want to show what we are worth
Ronald Koeman: Barcelona in a difficult month with an abundance of outings showed character and deserved their victories
Frankie de Jong: I started to play closer to the penalty area, so I score more
Manchester United's 13-match unbeaten streak in the Premier League was Interrupted
Source https://www.smh.com.au/national/victoria/live-music-returns-to-melbourne-but-still-no-crowds-on-sticky-carpet-20201125-p56hr1.html?ref=rss&utm_medium=rss&utm_source=rss_feed

‘They had knives’: Mother of Australia Day beach attack victim tells of son being assaulted by violent mob

Facebook results soar ahead of an uncertain 2021; Zuckerberg takes aim at Apple

Us is a bloodless portrait of a failing marriage, with postcard views

Queensland to reopen border to all of NSW on Monday

Qld to reopen border to Sydney

Proud Boys leader once cooperated with police, informed on other suspects

Proud Boys leader once co-operated with police, informed on other suspects

‘The end of our civilisation’: Putin raises prospect of global conflict

‘Not losing our time’: IOC insists Olympic Games will go ahead in Tokyo

How much is too much to spend on a gym membership?

Arizona Climbers Rescued After Being Stranded in Snow for Two Days

Psychological horror comes with a two-sided twist in The Medium

True cost of an education in Qld revealed

Patient zero to heroes: Our first year of COVID-19

Premier to PM: Fate of thousands in your hands

Qld borders reopen to all of NSW in shock decision

We must change to battle climate change

‘I could have paid a mortgage’: Private school education costs revealed

Your Daily Horoscope for Thursday, January 28

Sun, salt and breeze: a defence of the Freshwater ferry fleet

From the Archives, 1971: Henry Ford II jets into Sydney

Here’s the rub on the COVID jab: it’s no economic magic bullet

A plea for the kids returning to our hottest schools